Huff, the 2004 black-dramedy (yes, I’ve decided that’s a thing) on HBO, is on its face a very of its time show. Starring Hank Azaria (of The Simpsons fame) as the titular Craig “Huff” Huffstodt, the show focuses on Huff’s psychiatric practice, some of his patients, his family, and a couple of close friends. I don’t want to sound like I’m damning with faint praise, but it’s a good show. It mines the comedy of the dysfunction in the lives of Huff’s patients, but also exposes the ways in which the good doctor doesn’t have his own house in order. Dr. Huffstodt is mostly good trying mostly to do good, and the plotlines revolve around the fact that that seldom works out. It also starts with one patient’s death by suicide, so you can be sure that HBO was leaning into being as edgy as possible by early aught standards. All that said, the two-season show is entertaining but almost entirely unremarkable.

Except for one thing: Almost every actor working in 2004 apparently got a turn on the show.

Obviously, that’s a bit of an exaggeration, but seriously, there’s a lot of talent lining this IMDb page. What kind of talent? I’m so glad I asked myself. Talent like: I know that I just stated that Hank Azaria is “from The Simpsons,” but it’s also way, way more than that. His arc on Friends, his role in The Birdcage, Brockmire. Seriously, if anyone wants to talk to me about Brockmire in the comments, I’d really like to talk about Brockmire. Also an actor with a minor but important arc on Friends, Paget Brewster plays Huff’s wife, Beth. I’m not going to say “long-suffering wife” because attitudes towards mothers-in-law have changed over the past 17 years, but for real. Brewster’s also been seen on Community, Criminal Minds, and generally being someone I would like to hang out with. The suffering that Beth does? Mostly at the hands of her mother-in-law, Izzy, played with remarkable passive-aggression by Blythe Danner. You might be thinking, “Hey! Another Friends connection,” like I was, but also like me, you’d be wrong. You’re thinking of how Danner played Will’s mom on Will & Grace. She also appeared in a few episodes of American Gods which I’m still not ready to talk about yet. I’ve also heard that her daughter, Gwyneth Paltrow, is something of an actress herself. Oh. This one stings. Anton Yelchin, who tragically passed away in a car accident in 2016, plays Beth and Huff’s 14-year-old son Bird. To Huff‘s credit, they cast then-14-year-old Yelchin in the role, and, boy, does he look every inch of it. Like, there’s a baby-face and then there’s this. Yelchin would later go on to star in more movies that I can actually recount here, but notably the Chris Pine-led Star Trek films, Terminator Salvation, and Fright Night. Because honestly, every show should have Oliver Platt in it. Platt plays Russell Tupper, Huff’s . . . friend? Kind of? He’s a lawyer and pretty good at it and in a way that’s kind of slimy but he’s genuinely trying to do what’s ultimately the right thing so he’s kind of a good guy? Huff does seem to like him, but might find his excessive drug use and womanizing exhausting. Platt has starred in apparently most things ever filmed. Like throw a rock at an IMDb page (don’t actually) and you’ll hit something he’s been in. The West Wing, The Big C, the X-Men movies, Modern Family. You want a guy who’ll tell you how to fix your life even as he’s ruining his own? Platt’s your guy.

And that’s literally only the main cast. Rapid-fire of actors who popped up on this show in 27 short episodes?

The point is, I don’t know who exactly was pulling casting calls for this show, but they pulled literally every single one of them. And if you don’t enjoy the show, you still might at least enjoy shouting at your TV every five minutes, “Hey! It’s them! Now what were they in again?” 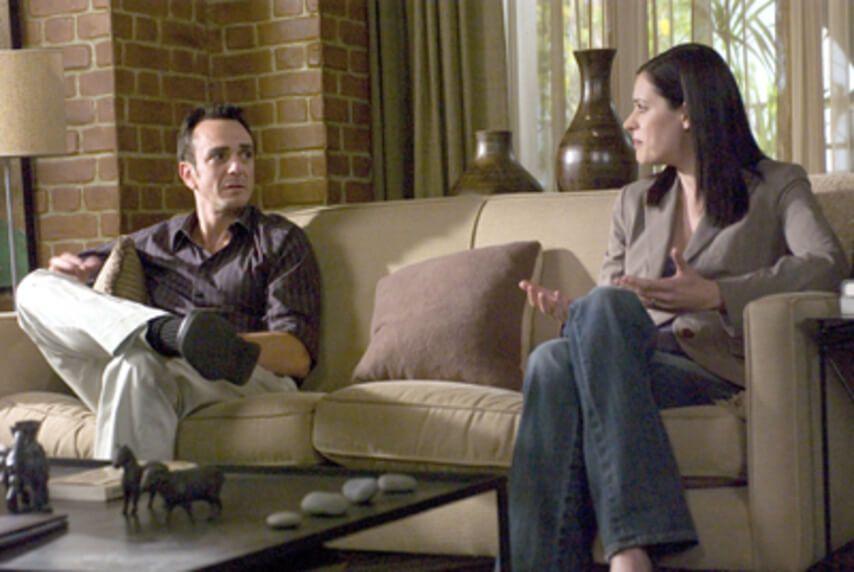