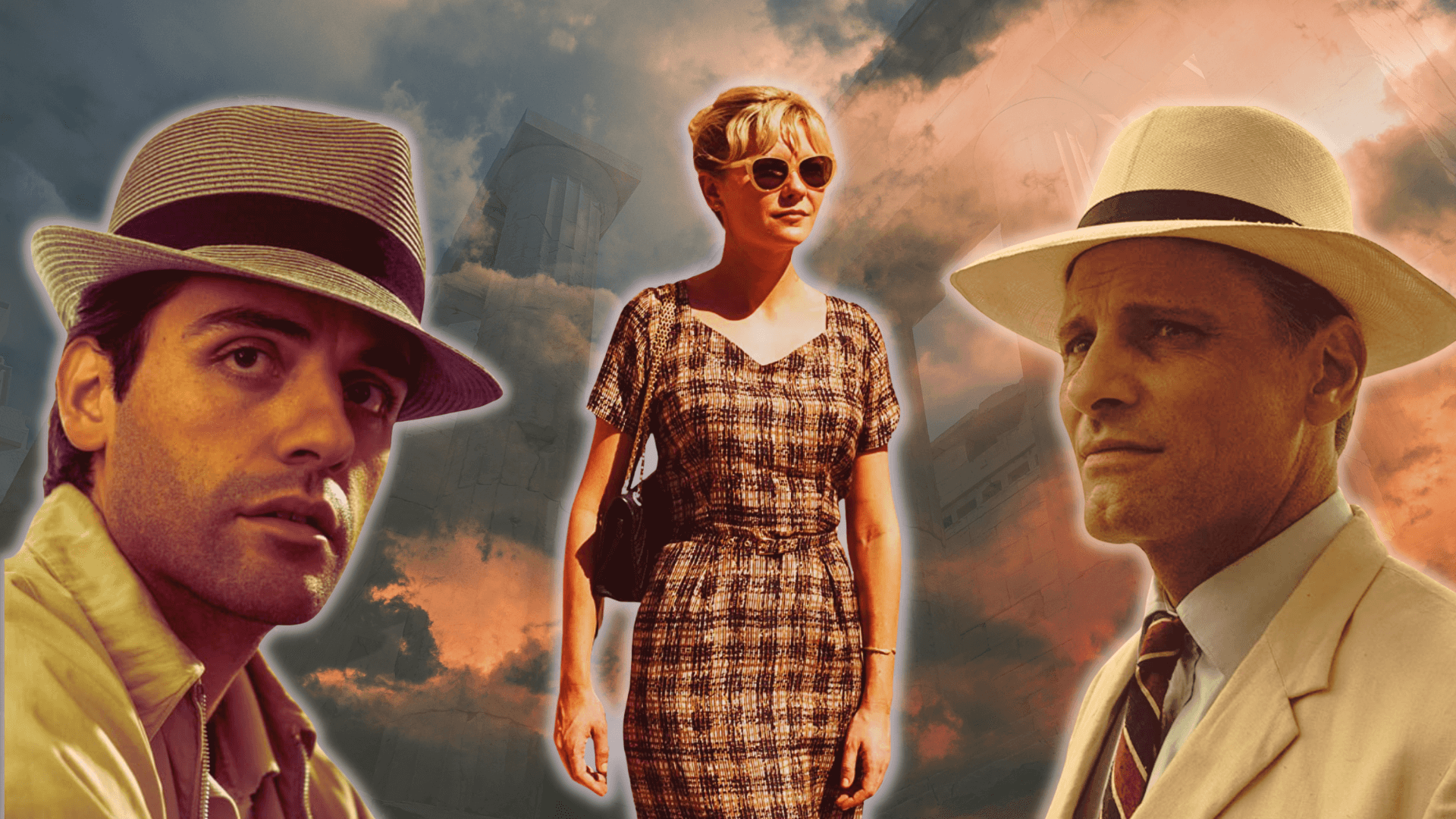 Early on in The Two Faces of January, there is a murder. As murders tend to do, this murder carries consequences. Fear. Flight. Suspicion. Tragedy.

But this is not a murder movie. Do you ever see a film poster and think, “When was this? Where was I? How did I miss that?” These were the questions running through my head when I saw The Two Faces of January, streaming on Plex. The striking Viggo Mortensen, the iconic Kirsten Dunst, and the my-celebrity-boyfriend Oscar Isaac, all in one Patricia Highsmith adaptation from Hossein Amini? Did I really ignore a film with such a compelling set of ingredients?

So I set out to right my wrong and watch it now. The film tells the story of Chester and Colette McFarland, an American couple traveling around Europe, who meet Rydal, a young American polyglot living in Athens as a tour-guide-slash-minor-con-man. After their initial encounter, the three are suddenly dramatically roped together by the aforementioned murder, causing them to be simultaneously each other’s only hopes of survival and greatest risks. As Chester, Mortensen exhibits a dark restlessness, which he most emphatically brings to life through his strained cigarette smoking. Dunst gives Colette a cheerful playfulness that can’t quite mask her frustration about feeling trapped in her life. And Isaac’s Rydal feels right out of Highsmith’s The Talented Mr. Ripley — equal parts charming and desperate, as he flirts his way into, first, a few extra bucks, and then, disaster.

Now, as I said before, this is not a murder movie. The Two Faces of January is classified as a thriller — and certainly there are thrilling moments. People are killed, people are betrayed, people are chased. But as a thriller alone, it’s just fine. The twists and turns often feel convoluted, unsatisfactory. Better, then, to view this as a tale in the ancient Greek tradition. In these dramas, the characters often have little control over their own lives. As any good ABBA fan knows, it’s the gods who roll the dice. And indeed, the destinies of Chester, Colette, and Rydal seem already written. They can’t escape one another.

Though the murder does solidify the trio’s bond, it’s not the inciting event of the film. That honor goes to Rydal’s piercing stare, which he can’t keep off of the couple — Chester, in particular. It’s so hard seeing someone else live my dream (having Oscar Isaac stare at me). Rydal can’t tear himself away, even when on a date with a young member of his tour group. When she catches him staring, he explains that Chester reminds him of his father. Yes, to paraphrase Demi Lovato, lucky for us, Rydal’s got all these daddy issues. Lucky, because that’s the real meat of The Two Faces of January. Rydal’s father was an exacting and demanding man, forcing his children to learn a lot of languages (there simply has to be more to it than that, but we aren’t clued in). Their estrangement is final: Rydal chooses to remain in Greece rather than attend his father’s funeral, instead latching on to fathers of myth. He tells his tour group in the opening scenes about the legend of Theseus, whose father threw himself off a cliff in grief over thinking he lost his son. When he sees Chester’s resemblance to his late father, it seems like the gods have given him a chance to do it all over, to win the paternal respect he craves.

Chester is wary of Rydal, but Colette (for reasons that are obvious if you’ve ever seen Oscar Isaac) insists they hire the young man as their guide. Rydal’s obsession keeps him coming back for far longer than he is needed. By doing so, he bears witness to the McFarlands’ darker side, and through his involvement becomes inextricably bound to the couple. And so begins their messy love triangle — an oedipal arrangement, if you will — with Rydal desiring both Chester’s fatherly approval and his wife. They navigate these choppy waters while on their own odyssey to flee the actions of their past and to try to reshape a future that feels entirely out of their grasp. Key to this story as a Greek tragedy is its stage, and Amini shapes a landscape that is both ancient and contemporary. While in Athens — and while the protagonists still have their sense of control — the setting is positively evocative of 1960s European glamour. Yet, once fate intervenes and casts them out into the relative wilderness of Crete, they seem lost in time, stumbling around ancient ruins and across barren, rocky hills. When they do enter towns, it is always under the threat of surveillance, both by the police and by the apparent chorus of locals who are always around, eyeing them. The film’s climactic chase through labyrinthine streets is an apt closing reference to the Thesean thread throughout.

So, if you’re itching for a thriller, this might not be your scratch. But if you want an evocatively Greek tale of father/son mutual destruction — or, and I cannot stress this enough, if you find Oscar Isaac hot — The Two Faces of January might just be the hidden gem for you.