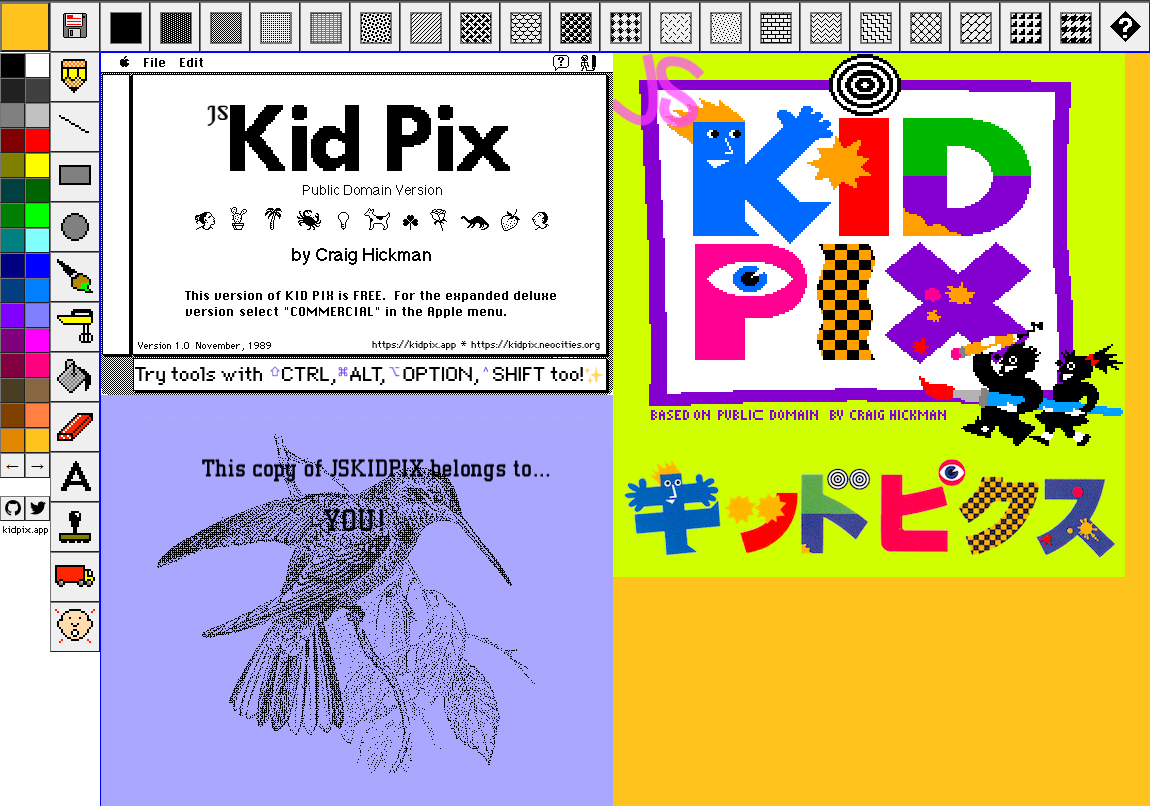 It’s autumn, if the cooling temperatures are anything to go by, and my brain has decided it’s the perfect season for reminiscing. Not the usual anxieties about that one thing I said to someone over fifteen years ago. Pleasant memories of simpler times, simpler lives, and simpler games.

Yes, games. One in particular comes to my mind: Kid Pix.

This game — or, rather, kids’ art software — popped up in my thoughts recently because of a Kid Pix 1.0 Javascript/HTML port released in August. I messed around with it last month and surprised myself by spending an entire hour doodling nonsense. Time flew by like it was nothing. I was a kid again, staring into a boxy monitor, clicking around like crazy and listening to all the goofy sounds made by each brush, eraser, and stamp.

How can Kid Pix be so hypnotically fun, even after all these years? I think it’s because of the simplicity of the program — something the creator, Craig Hickman, intended.

For those who don’t know, Kid Pix was an art program first released in 1989 for Macintosh computers. (The version I played as a kid was for MS-DOS.) Hickman, a software designer and photographer, designed the program when he watched his three-year-old son become frustrated over MacPaint’s controls. In a blog entry called Kid Pix – The Early Years, Hickman wrote that his son “didn’t have total control of the mouse and would occasionally […] pull down a menu and bring up a dialog box that he couldn’t dismiss without being able to read.” This would create immense frustration for his child, which wasn’t what Hickman “had in mind for [his son’s] introduction to the computer.”

Hickman decided to write an easy-to-use drawing program. He designed the software with numerous criteria in mind to ensure it would be perfect for kids. My attempt at a nighttime cityscape. / kitpix.app

First, it had to be “extremely easy to use.” Hickman didn’t want to force children to read a manual before using Kid Pix. He wanted them to figure out the tools just by using them. Additionally, each tool would have multiple options that stood out from the “traditional” tools used in other art programs — hence the funky bubble and scribble brushes, stickers, and stamps. Overall, the program had to be fun, surprising, and satisfying to use.

“The process of making a picture should be as important as the picture produced,” Hickman wrote.

He also put a lot of thought into the user interface. Hickman’s son had a lot of trouble with drop-down menus, so he didn’t put that many in Kid Pix. Every tool and additional tool options would appear in plain sight as a bar along the side and across the bottom of the screen. He also made sure the drawing space was as large as possible without needing scroll bars. “[It] is essential to see your whole picture at the same time,” he believed. I didn’t truly understand the importance of Hickman’s design standards until this month. I spent a lot of time working with “grown-up” art software like Clip Studio Paint, Photoshop, and Affinity Designer. To use these programs, I had to think about multiple settings like types of brushes, layers, colors, image layout, RGB vs. CMYK, and praying that the program wouldn’t crash before saving. (I’d really like to emphasize layers again here just because no session was complete without accidentally marking the wrong layer.) There was a lot to think about and fiddle with to make an image look good.

In contrast — while playing with Kid Pix’s quirky brushes, stamps, and erasers — I realized I focused on the sound of the tools rather than what the picture looked like. Who cares whether the forest looked like an actual forest? The tree brush made sparkly magical noises, wheeeee. Why are there splatter spots everywhere? Because the splatter brush went “brbrbrbrbrbr” and I liked it a lot. Any mistakes? I’m not mad. Dynamite goes “boom.”

It was more about the process of doodling rather than the doodle itself, just as Hickman intended. That’s what makes this software so special for both kids and adults more than 30 years after its initial release.