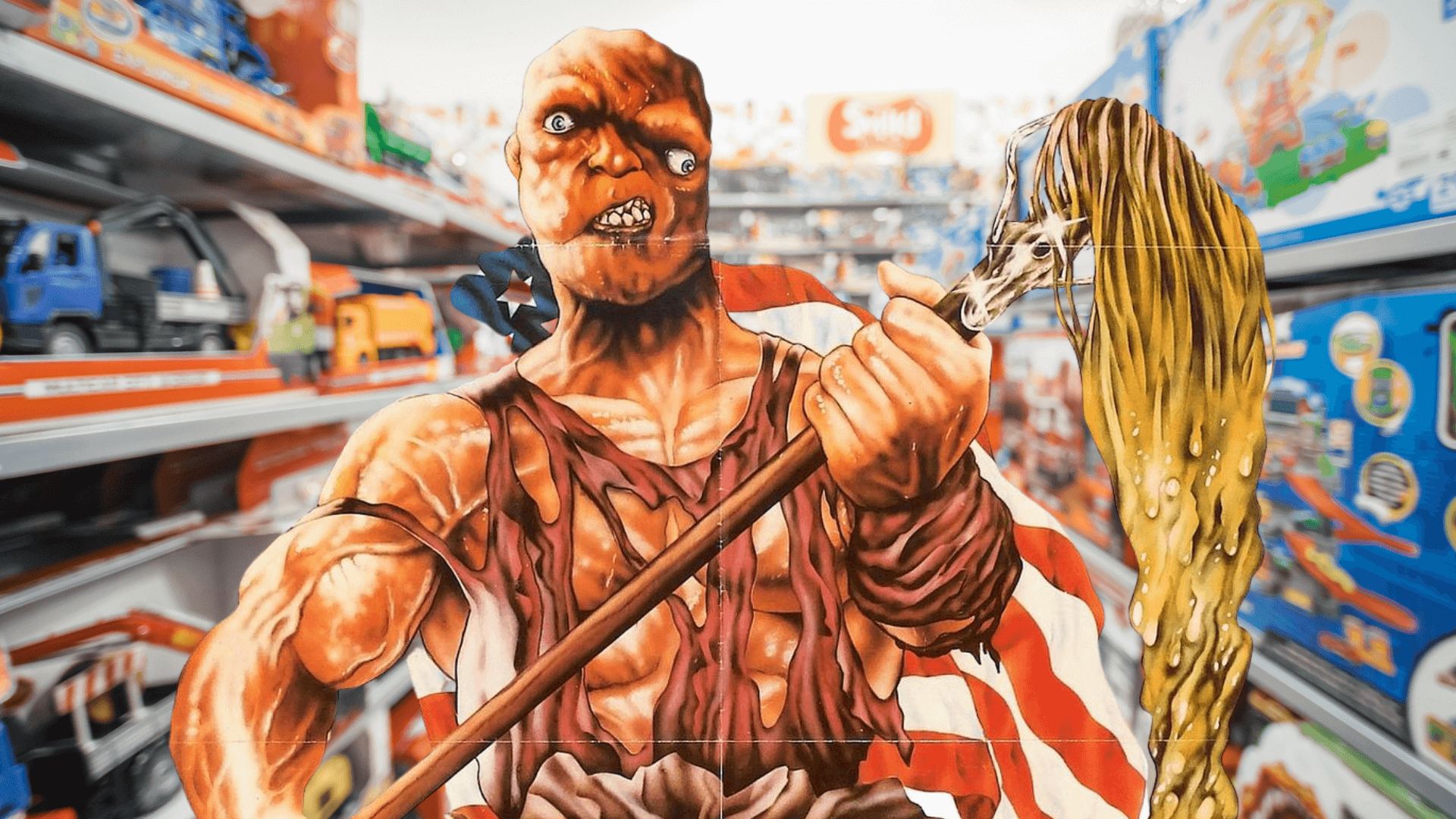 A weird thing happened to kids in the late 80s and early 90s. But before I get into that, I need to talk about the 1984 film The Toxic Avenger.

For those who haven’t experienced The Toxic Avenger, it is a gory, absurd, and intentionally offensive superhero satire of 80s excess, pollution, greed, and corruption. The story details the transformation of scrawny and dimwitted janitor Melvin into a grotesque and unstoppable crime-fighting force after he falls into a barrel of toxic waste. The film follows your traditional revenge plot as Melvin seeks vengeance against his bullies one by one. Along the way Melvin eradicates the criminal element that populates Tromaville, billed as the “Toxic Chemical Capital of the World.” As is made clear by this unsubtle bit of ecological commentary, The Toxic Avenger stands out by dialing everything up to 11. The film is almost refreshing in its bluntness.

The bullies and other antagonists are given no redeeming characteristics, no sympathetic backstories to create an illusion of depth. No, they spend their spare time competing in games of hit-and-run where points are allotted for each kill. Also, the points increase based on the victim’s ethnicity, age, and disability. It only helps that the actors behind these roles perform as if they are cocaine given human form.

In another scene, a maniacal gang executes a young blind woman’s seeing-eye dog. Also, Tromaville’s mayor is corrupt and slovenly, and the chief of police is a literal Nazi. There are no shades of gray in the universe of The Toxic Avenger. Only black and white, good and evil.

Standing on the side of good is our pure-hearted hero, Melvin. While this protagonist’s intentions are in no way morally ambiguous, the ruthlessness and violence with which he dispatches his foes is less upright. All the over-the-top decapitations, mutilations, and other acts of violence in the film are depicted in plain sight. The camera makes sure to capture all the gory details, while the movie’s practical special effects belong in a movie with ten times the budget.

So why do I bring up this hyper-violent, often transgressive romp? Well, for kids my age in the early 90s, this wasn’t The Toxic Avenger we knew. Instead we had this:

Yep, I grew up watching Toxie and the gang try to defeat an evil alien force set on polluting Earth. This may seem weird for those unfamiliar with Saturday morning cartoons from this era, but adapting R-rated satirical properties for the kiddies was all the rage.

Side note: This might break your mind, but the voice of Toxie in the animated series went on to take the role of — you guessed it — Squidward from Spongebob Squarepants.

I grew up watching The Toxic Crusaders and the animated Swamp Thing, completely unaware of the very adult material from which they were adapted. Similar mature films such as Rambo, RoboCop, and Police Academy also made their way to Saturday morning cartoons, completely stripped of all the graphic bloodshed and adult themes of their source material.

And, of course, the point of any Saturday morning cartoon at the time is to advertise a new line of action figures available at your local toy store.

Selling environmentalism to kids was popular in the early 90s. The Toxic Crusaders toy line was expected to go head to head with Captain Planet during the 1991 holiday shopping season. Both sides spent around $5 million in promotion leading up to that Christmas.

Of course, saving the planet from pollution wasn’t a priority for Playmates Toys, manufacturer of the Toxic Crusaders toy line.

“We don’t want to turn this into a school lesson. We’re very subtle,” Playmates Marketing Director Karl Aaronian told reporters in 1991. “We’re focusing on humor and the light-hearted nature of the characters. If you get too preachy, you alienate kids. Humor always sells. But, basically, it’s important for kids to have fun.”

But along the way, something went wrong for the Toxic Crusaders’ toy line. While sales started off strong in the summer of ’91, that success was short-lived. Production of the Toxic Crusaders action figures was halted days before Christmas that year.

“Early on there was some reaction with Toxic Crusaders, but that’s slowed down quite a bit,” Toy Book publisher Jim Silver told the Chicago Tribune in December 1991. “We don’t see anything like the environmental toys showing up in the top-selling categories of any of the top retailers.”

The cynical takeaway from all this is that the wheels of consumerism ground off all the rough edges of a challenging movie and repackaged it for children in a hollow attempt to promote environmentalism. It’s difficult to consider it any other way.

The true irony of this whole thing is that a vulgar B-movie about a toxic janitor could ever result in something so sanitized.

The Return of Swamp Thing