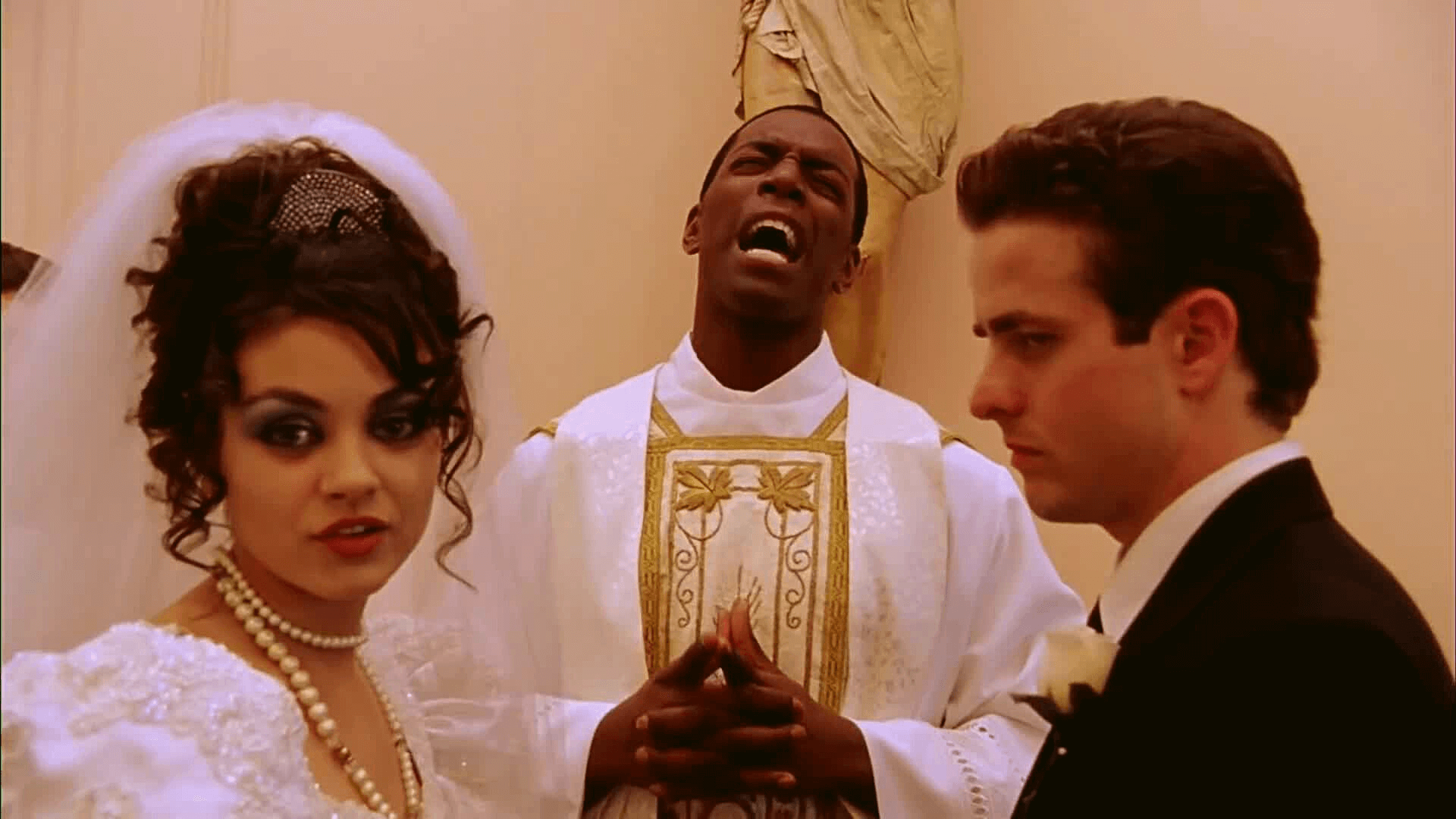 Back in the day, there was a popular Off-Off Broadway production called Tony & Tina’s Wedding. When you went to see Tony & Tina, you basically played the part of a wedding guest. You went to the wedding, then you went to the reception. Actors sat with you, talked to you, got drunk around you, started fights and songs and dances. It was a blast.

That was the whole schtick–it was an immersive experience, never the same twice (which I know, because I saw it three times over the years). There was a plot, of course, and it played out along the same general lines each time, but the fun was in the little interactions between the actors and the audience. In short, it was a theater experience. It was not a film.

Nevertheless, more than 15 years after it opened, writer/director Roger Paradiso decided to make a movie out of Tony & Tina’s Wedding. Friends, this was not a great idea. Because when the point is immersion, putting it on film removes that point. I’m just saying.

Paradiso tried to recreate the “you are there” experience by showing the whole thing through the lens of an overambitious wedding videographer and his team, so what we’re watching is a lot of shaky handheld camera shots and a lot of characters giving the finger to said shaky handheld camera.

Why, you ask? Well, because of the story. You see, Tony and Tina are both from big, boisterous Italian-American families on Long Island in the 1980s. And apparently back then people found it weird to be filmed constantly, and therefore flipped off the cameramen, as one does. If you ask me, we could do with more of that in our current pics-or-it-didn’t-happen reality.

Long story short, the families represent different Italian stereotypes, which means that they don’t get along. The bride and groom are young, so is their wedding party, and everyone is an idiot. It’s Long Island in the 80s, so the hair is big and the accents are thick. The wedding is a disaster, featuring an old flame of Tina’s falling in the wedding cake in his underwear, the groom’s stepmother doing a sexy table dance, and old Uncle Lui pissing in the font of Holy Water.

Putting us in the videographer’s point of view is a decent idea, but can’t replace the experience of interacting with all these characters yourself. And a wedding in a cheesy Coliseum-themed banquet hall in Massapequa is probably not everyone’s idea of funny. I am from Long Island (and the 80s) so it works for me. I’m here to tell you that 85% of the actors got the Lawneyeland accent right. (Despite what you’ve heard, it’s not Lawn Guyland. It’s one word with only the slightest hint of a G at all. You’re welcome.)

This film got bad reviews and sank like a stone. Here’s why you should watch it. It stars Mila Kunis as Tina. She gets the accent wrong, but her usual attitude (you know it) is absolutely correct for an “Italian-American Princess.”

It stars Joey McIntyre as Tony. No, I don’t know why. But when’s the last time you thought about Joey McIntyre, and therefore about NKOTB? Again, you’re welcome.

It stars Adrian Grenier in the weirdest role of all–a dude who Tina slept with once, who has now decided he’s still in love with her. I legit do not know what Grenier thinks he’s playing here, but he’s in a different film from the rest of these actors. They’re chewing scenery. He’s acting like Jesus in Godspell. It’s bizarre. And now for the big guns. It stars Sebastian Stan–baby fat and all–as Tony’s younger brother, a wannabe womanizer in a mustard yellow frilly tuxedo shirt.

Finally, it stars Jon Bernthal as Tony’s groomsman Dominic. I feel like I don’t need to tell you that he’s the only one in the whole movie who manages to be tongue-in-cheek but also kind of realistic and moving once in a while. God, he’s so good. In everything. Also, his hair is long and stupid, as is appropriate for the time.

So if you’re in the mood for some big stars cursing up a storm while dressed in 80s Long Island drag, this is the movie for you! I suggest you do what we did Off-Off-Broadway: pour yourself a drink and pretend you’re at the wedding with them.