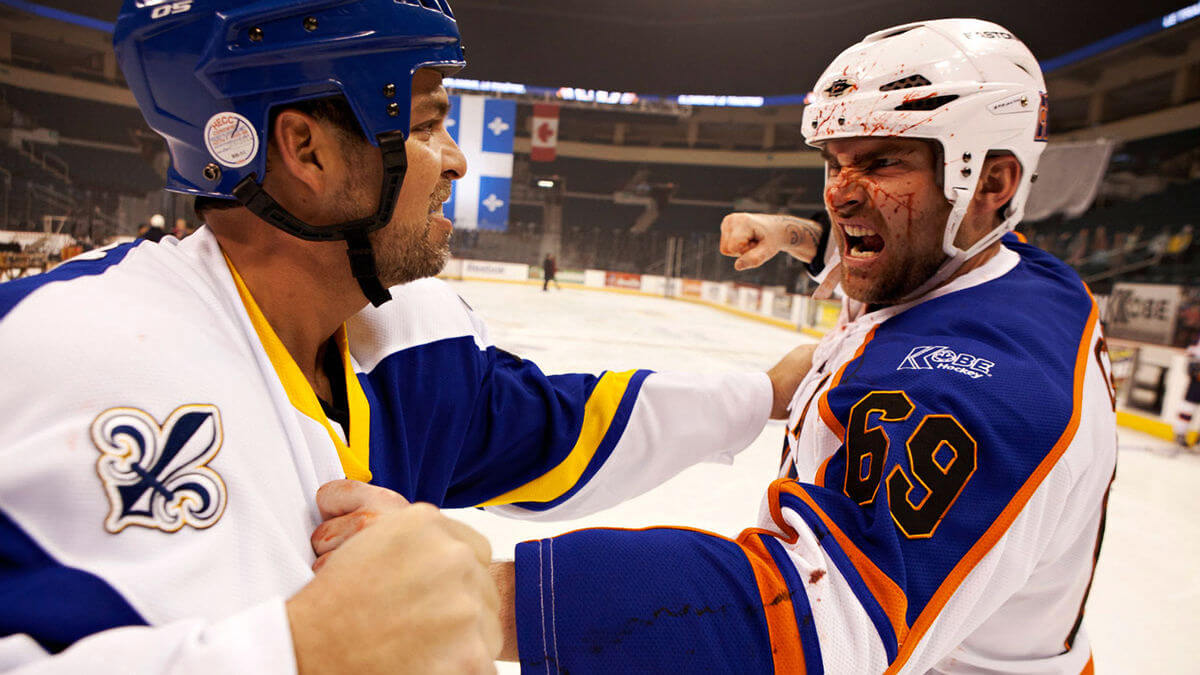 There’s a parallel universe where Goon is exactly the kind of by-the-book movie you would expect it to be: an eager young guy joins a hockey team, makes friends with some teammates while also winning over some reluctant older players, finds love with a local fan, and helps the team to victory (either official or moral) in the final act. It would be the best and most reassuring kind of predictable, with the look and feel of a well-used machine, and it would handle about as expected. It would, in other words, be a perfectly serviceable sports movie. What makes Goon so enjoyable, though, is its dedication to being something different. It’s not an anti-sports sports movie (like, say, Moneyball, which is nominally about baseball but is really about depressed people learning basic communication skills). Rather, it’s looser, sillier, and weirder than most sports movies. It doesn’t feel beholden to some of the typical story beats you’d get in a sports movie, which makes Goon feel less like another entry in the broad category and more like its own odd, pleasant little universe.

For starters, Doug Glatt (Seann William Scott), a genial bouncer at a Massachusetts bar, has no plans to be a hockey player and no real connection to the sport other than being friends with Pat (Jay Baruchel), a local loudmouth who hosts a public-access sports show called “Hot Ice.” One night when they’re at a minor-league game, a player from the opposing team jumps out of the penalty box and uses the homophobic f-word when insulting Pat and the crowd. Angrily replying “Hey, my brother’s gay,” Doug clubs the player into submission (though not before humbly asking, “Do you wanna take that word back, please?”). Doug’s display of brute strength leads to his recruitment into regional hockey and eventual placement on a team in Halifax, where he’s tasked with acting as an enforcer and protecting a hotshot player named Xavier Laflamme (Marc-André Grondin) who’s dealing with the yips after being clobbered one too many times by a powerful enforcer named Ross “The Boss” Rhea (Liev Schreiber). “Enforcer” is technically an unofficial position in hockey, which is objectively hilarious given that it’s the only sport where everyone expects brawls to break out at every game and where angry players are forced to sit in time-out while fans throw things at them. Hockey is pure speed and brutality, and an enforcer’s job is to fight. The set-up is less about Doug succeeding as a hockey player and more about him looking for some place to belong, period. He’s strong, so fighting is something he knows he can do.

This is a comedy, though, and Goon doesn’t just have a sense of humor, it has a sense of its own humor, as well as the confidence to let it play out. At one point, Doug is in his coach’s office talking about a major opportunity that’s come up. Instead of just ending the scene when the announcement is made, though, Doug and the coach have a whole conversation about a wolf that the coach is drawing:

This is almost surreal in its randomness, blasting out of left field like something from Hot Rod played unironically, and it’s the sort of little touch that gives Goon a lift and sense of playfulness that most other sports comedies don’t have. The movie’s full of little gags like this that are just chances for the characters to play around.

Goon is so endearing, too, because while Doug knows he’s good at fighting, he’s shy and doesn’t take particular joy in hurting people. It’s a tough sell, playing a fighter who’d rather not fight, but it works because of Seann William Scott’s innate gentleness and commitment to character. He’s a genuinely great comic actor with so much more nuance and physicality than he’s sometimes given credit for having (his chemistry with Paul Rudd in Role Models is so good that it should be shown in schools). When Doug and Pat are at the game and Doug holds up his corn dogs and says in a deadpan “These are tasty treats,” it’s funny and weird and sweet and real, all at once. Scott creates this absolute puppy of a human, making for a wonderful juxtaposition between his kindness and the story’s inherent violence. In his way, Doug’s a forerunner of Ted Lasso: simple but not stupid, kind but not idiotic, loyal but not naive.

Sports movies are all about triumph, even when they’re about triumph thwarted (A League of Their Own) or redefined (Rocky). This is because sports themselves are the pursuit of victory, and glory, and the sense of infinitude that you can tell yourself you’ve achieved by being, however briefly, the best. For just one moment, our collective consciousness is occupied by you, and the attendant buzz that comes from that feeling gives you a glimpse into what must be heaven. Great sports movies capture this emotion, and Goon is a great sports movie. As it barrels toward its inevitable showdown between Doug and Ross, it invests its characters with a sense of purpose and humanity, giving Doug a reason to fight that’s not just about protecting his teammates but about defining himself. The payoff here isn’t about a world championship: it’s about something much smaller, which means it’s really about something bigger.