In his 2012 book Nonsense as the Meaning, Italian philosopher Leonardo Vittorio Arena writes “If philosophy, as it is should be, reflects the world in itself, it cannot dispense with accepting nonsense. What does it mean? That everything occurs without a cause, even though one can be found a posteriori, after the event. Everything finishes in nonsense.”

While likely not referring to the 1989 cult classic Road House, this is where I’d like to begin discussing the film.

Roger Ebert described it as “the kind of movie that leaves reality so far behind that you have to accept it on its own terms.” In this way, Road House — like all truly profound “so bad, they’re good” movies — serves as much as a logic puzzle as it does a sweaty action movie.

So let’s follow along with Mr. Ebert’s advice. Let’s give ourselves over to the nonsense and unravel the subtle worldbuilding of the Road House cinematic universe. Because this reality isn’t looking so good at the moment.

The first thing Road House makes clear is that the nightclub industry — best represented in the form of garish neon honky tonks — is the economic engine of the world. Without a word, director Rowdy (yes, Rowdy) Herrington communicates this information through a series of establishing shots that flash Italian sports cars and $100 tips at a bar called the Bandstand. Of course, the elites in this universe attend clubs where attendees wear only the finest satin jackets.

Crucial to securing this crown jewel of the Western economy is this universe’s most coveted citizen — the bouncer. But the movie shows rather than tells.

Arriving at the Bandstand by airport limousine, businessman Frank Tilghman (Kevin Tighe) seeks out the bar’s main cooler. Tilghman owns a little place outside Kansas City called the Double Deuce. He hopes to clean it up. To do so, he’s traveled all this way to recruit “the best” — Dalton (Patrick Swayze).

With this in mind — name the best bouncer from the next state over.
Going even further, rank the bouncers in your zip code.
You can’t. But you don’t live in Road House.

To further establish the inescapable influence that bouncers maintain in this universe, Dalton says that Wade Garrett (Sam Elliot, looking sexier and more grimy than any person has the right to) is “the best.” Tilghman responds that Wade Garrett is getting old.

So not only has the film established that bouncers are nationally renowned. Citizens are also up to date on their overall rankings and time in the business.

It would have taken Christopher Nolan the entire first act and multiple walk-and-talks to dispense this amount of exposition. Rowdy gets it done before the opening credits even finish rolling. Now that we’ve established the upper hierarchy of the Road House universe, let’s talk dollars and cents. For his services in rehabilitating the Double Deuce, Dalton demands $5,000 up front and $500 a night, including medical expenses. Yes, even Dalton identifies health care as a right.

Seeing as oversized watering holes called something like the Whiskey River or Flaming Sally’s are this world’s leading conglomerates, what economic sectors have they usurped? With all the subtlety of a kick to the head, the movie fills in those gaps by undermining the fossil fuel industry.

Our best indication that the world of Road House has discovered an infinitely renewable energy resource is that monster trucks are used as a regular means of conveyance. Like, a man just drives around in a monster truck while running errands, and nobody says anything.

While in our own world this would be cost prohibitive, there is one thing we must remember: we can only aspire to Road House.

As Dalton arrives in the town of Jasper — home of the Double Deuce — he immediately secures a fully furnished lakeside loft above a barn complete with a full kitchen, linens, and electricity. Mind you, this rental unit is directly across from the mansion belonging to town wealthy overlord, Brad Wesley (Ben Gazzara). Dalton’s rent is $100 a month. In our own world, this location would go for luxury adult treehouse prices on AirBnB. It is for this reason that we can only assume that some form of national rent control is in effect, thus affirming housing as a right. 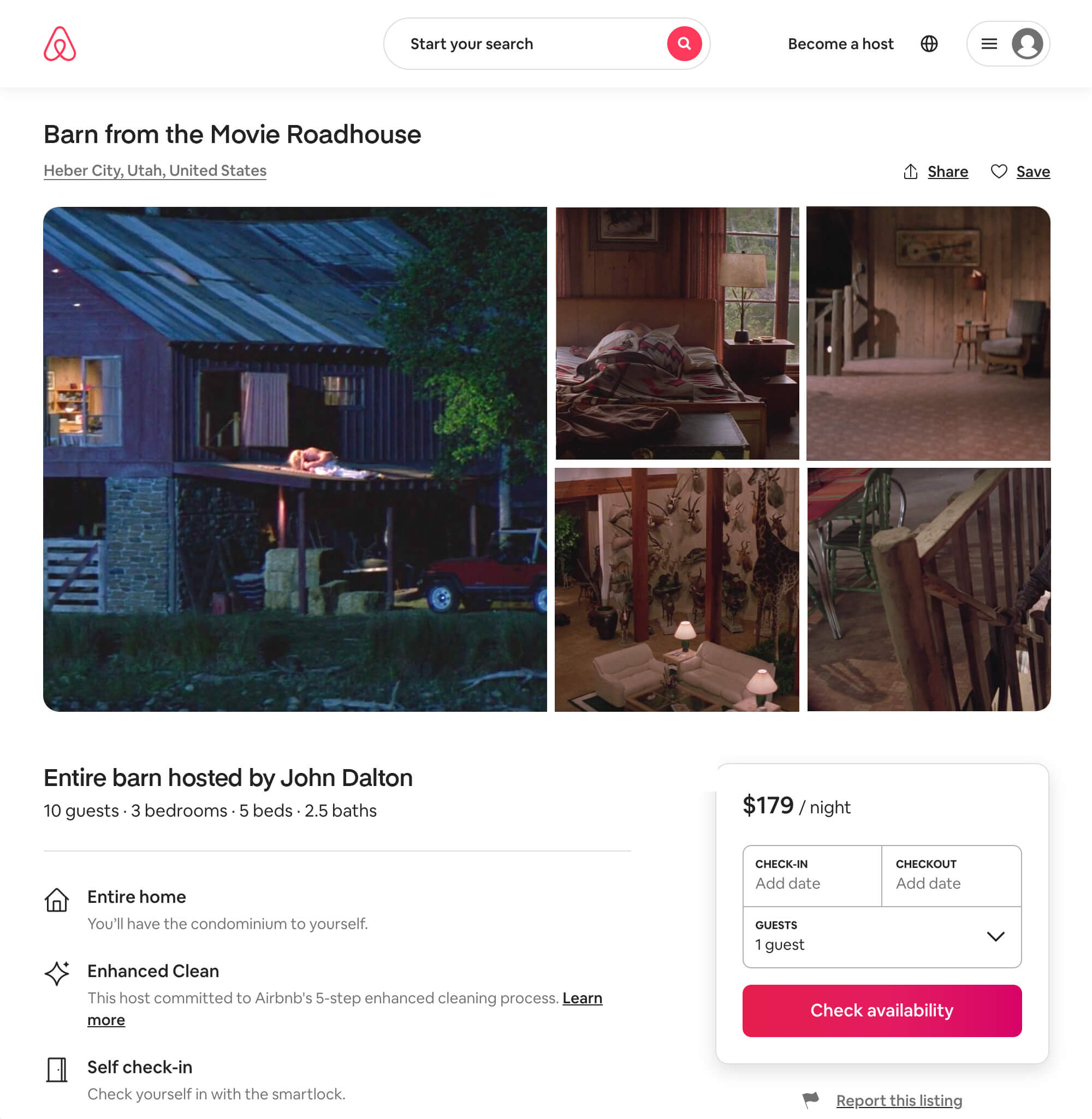 The only downside of this arrangement is that Wesley often conducts random flyovers in his helicopter to frighten the horses, but remember, fuel is cheap in Road House.

Another thing that is unique about Road House is the near complete absence of a police force. Arriving at the Double Deuce, Dalton observes a full-on brawl where everyone attempts to murder everyone else. There are no police. There is no law. Characters later claim that the police are in Wesley’s back pocket, but I’ll explain why that’s not the case later. There doesn’t really seem to be any form of local government either. Instead Jasper seems to operate as more in line with Thomas Jefferson’s ideal of a Yeoman Republic.

Of particular note, Dalton fires and replaces the Double Deuce’s primary bouncer, played by legendary professional wrestler Terry Funk. Funk, other than being a Funk, is notable as the runner up to the 1995 King of the Deathmatch Tournament, falling to Cactus Jack in the finals.

Speaking of this film’s supporting cast, special recognition also belongs to auto parts store owner Red Webster (Red West), who was a real life friend of Elvis. I don’t have any additional commentary there. It’s just oddly fitting that somebody in this movie was in the Memphis Mafia. 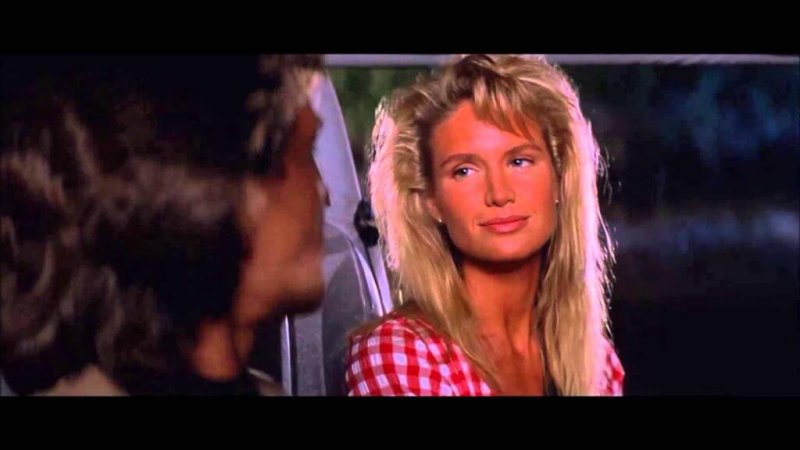 Dalton travels with his full medical dossier, which oddly enough includes mention that he has a degree in philosophy from NYU. I don’t really see how that is medically pertinent, and it’s funny to think of the otherwise stoic Dalton shuffling in his college transcripts to impress medical workers.

Throughout the film, I’ve been tracking Dalton’s estimated income as he transforms the Double Deuce into the prime destination of Missouri. Tallying the scenes that clearly depict a new night shift, Dalton works a total of seven nights at the Double Deuce before the film’s end. Coupled with his $5,000 signing bonus, Dalton rakes in around $8,500 for a week’s work.

Meanwhile, main villain Wesley seems to support his small-town empire by taking 10 percent from local businesses as part of the Jasper Improvement Society (something that is established early on as a sign at the used car dealership reading “Jasper Improvement Society” is seen on the wall behind a salesman’s desk. This is some incredibly subtle foreshadowing for a movie that plays on TNT five times a week).

As it was destined to do, Road House steadily becomes a classical utopian origin story. Dalton surfaces as the Platonic philosopher king. He is heralded by a Homeric blind bard in the form of bluesy Double Deuce bandleader Jeff Healey. And the bar itself is quickly reshaped by Dalton into this film’s version of the utopian city of Kallipolis.

After Wesley conducts multiple acts of domestic terrorism by firebombing and monster trucking several local businesses, the townspeople begin to gain class consciousness and decide the best route forward is to wield shotguns.

Mind you, this is all after Wesley instructed his henchmen to drive a monster truck across a Ford dealership in full view of townsfolk. The movie really makes it clear that despite all of his bolstering, Wesley is a very dumb man. His criminal plans consist of nothing more than exploding every building in town and asking people for money. In response, Dalton invents Crossfit in his barn-home and prepares for battle.

A violent exchange with Wesley’s main henchman ends with Dalton ripping out the man’s throat. This is murder. If Wesley did have the police in his pocket, now would be a great time to unleash them and arrest Dalton. A clean, easy solution to all of Wesley’s problems. I’m not sure how great the detectives are in Jasper, but it can’t be too difficult to dust for throat at a crime scene.

After discovering his best pal Wade murdered, Dalton launches a final, one-man assault on Wesley’s mansion. In an incredible piece of character work, one henchman is seen in the background scratching his back with a shotgun as they await Dalton’s arrival. Sneaking through Wesley’s estate, Dalton easily dispatches the henchmen one by one. At least two are fatally wounded, while Dalton chooses to trap the oafish Tinker under a taxidermy polar bear. Finally, Dalton and Wesley square off for a thrilling final fight. In what amounts to a character arc in the world of Road House, Dalton decides not to rip out Wesley’s throat. Suddenly, all the town’s businessmen rush in brandishing rifles. They take turns firing into Wesley.

Of course, having neglected his duties up to this point, the sheriff arrives at the scene of multiple homicides. The businessmen coyly repeat that they “didn’t see anything,” whereas Tinker mutters the immortal lines “A polar bear fell on me.” Everyone laughs, as blood and viscera drip from the walls.

The film ends as Dalton and Dr. Clay skinny dip in the pond where he disposed of a dead body just scenes earlier. To return to a question posed earlier by our esteemed philosopher Dr. Arena, “What does it mean? That everything occurs without a cause, even though one can be found a posteriori, after the event. Everything finishes in nonsense.” 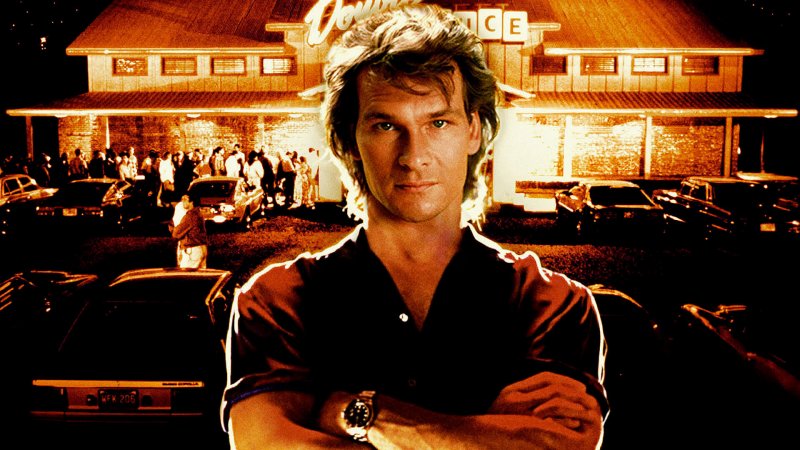 Need more Swayze? We got you: 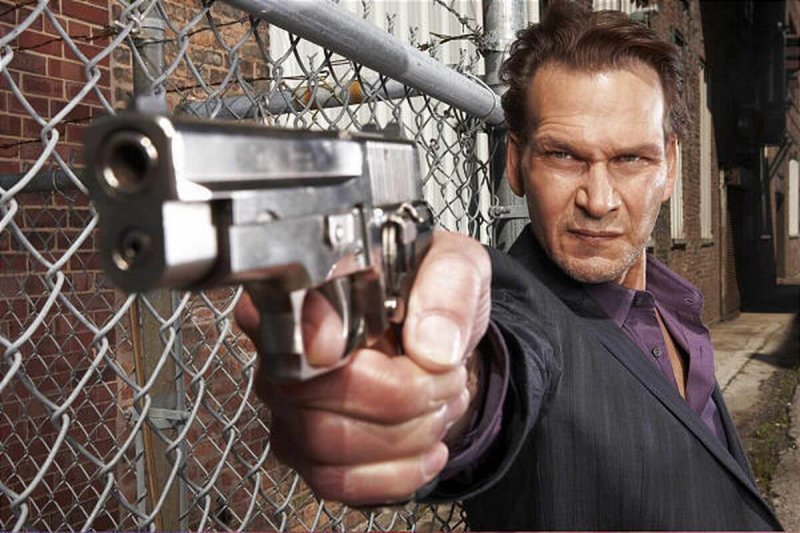