Having moved to America from Iran, a place where kids–especially girls–are meant to be (barely) seen and not heard, I’ve always been hyper-aware of what beautiful, assertive, confident white girls get away with that I can’t. Exhibit A, Jessica Day from New Girl. Never has this phenomenon been more clear to me than watching Jess incessantly whine her way into our hearts and minds, demanding to be loved and adored because she is a “quirky” underdog. Jessica Day is a nightmare. Deep down inside, you all know it too.

Like many of you, I’ve been binging New Girl to escape what I believe is Dante’s previously undetected 10th circle of hell, which we’ve come to know as 2020 and now 2021. It’s been trending on Twitter on and off so much that there’s even been talk of a reunion episode.

I can’t get enough.

I watch it while I cook, fold laundry, procrastinate, and tune out my son’s very loud kindergarten Zoom class (honestly guys, red is not that hard to spell. Wrap it up. The world is ending). I consider myself a huge New Girl fan, so it’s with a heavy heart that I say Jessica Day is an irritating, manipulative, narcissistic sociopath (come on, who sings a theme song about themselves?)

Now obviously TV is not real life. I get that. Living in an isolation bubble in the midst of a global pandemic hasn’t eroded my understanding of network television. I know what’s what. But somehow, unlike the other shows I watch while waiting for Covid-19 to magically vanish, Jess gets under my skin.

I guess it’s because someday our children and our children’s children will watch this show during Covid-45 or whatever and we’ll have to justify why we rooted for a grown-ass woman who ruined Thanksgiving dinner by throwing a whole turkey in the kitchen sink because she was upset that her happily divorced parents weren’t getting back together. 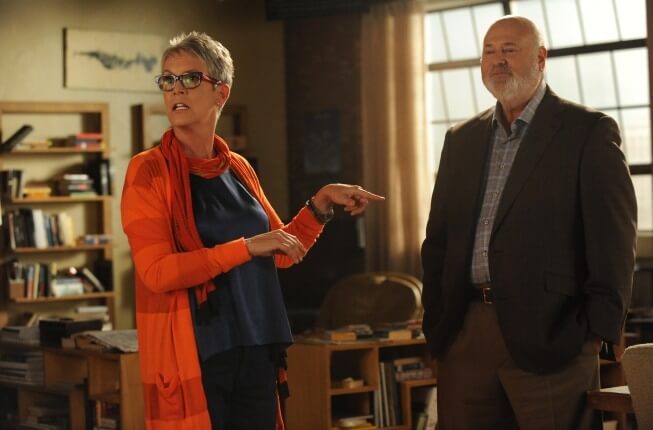 A whole goddamn turkey! You want to throw a tantrum? Fine. Do away with the cranberry sauce or that vegetable potato pie that’s supposed to pass as dessert and that marshmallowy-squash thing that even as an immigrant who’s lived in America for most of her life I still don’t understand.

But it’s not all Jess’s fault. She’s constantly surrounded by enablers who allow for this type of behavior. I mean, in what world would you be able to throw a turkey in the sink and no one says what is wrong with you? Instead, you get a pep talk from your mother, Jamie Lee Curtis, who just happens to be a goddamn national treasure. Not a fight. Not a confrontation of any kind, just a sweet “hey kiddo, let’s turn that frown upside down!” Try that bullshit on a Middle Eastern mother and T-minus two minutes later, you’ll be enjoying a resurrected sink turkey quietly with the imprint of a shoe on the side of your very sorry face. (White mothers, amirite?) 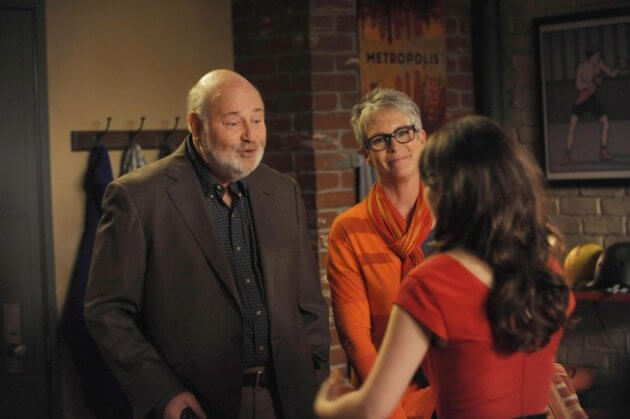 Don’t get me wrong: I’ve always dreamed of having those TV parents that come to your room after you act out and basically apologize to you on behalf of the universe. I’d love a Jamie-Lee-Curtis-type mom who says shit like “follow your heart” or “I just want you to be happy,” instead of “you should have gone to pharmacy school” or “we are going to the butcher to sacrifice a chicken for your sins” when you’re 10 years old. So yeah, I’d love to wield that kind of otherworldly power over people, to insist that people care about my feelings and allow me to indulge them at the expense of their Thanksgiving holiday. I’d be throwing a turkey into the sink every day. But no, instead I suck it up and mutter passive aggressive remarks under my breath like a normal person.

Jess is the product of those parents. And that’s why she hucks turkeys. Because she can.

But that’s just the tip of the ol’ Jess the Mess iceberg.

Jessica Day, I’m sorry to say, is an egomaniac cloaked in polka dots and “pajama outfits.” (Never forget that Nick’s ex Julia tried to warn us). Jess is like a Jell-O shot. So sweet, colorful, bouncy, and fun! So seemingly innocuous until the seventh shot when you’re crying into a toilet wondering how you got there.

The Jell-O shots are how.

You didn’t see it coming. None of us ever do.

I’m even more shocked that besides not calling her out on ruining Thanksgiving, no one put her on blast for not inviting Sadie to her wedding. Where I come from, you are obligated to invite your parents’ friend’s pharmacist’s great aunt because in 1988 she hooked up your cousin with some good sangak in Tehran. So not inviting Sadie made absolutely no sense to me.

In case you need a refresher, Sadie is Jess’s doctor friend. The one she uses whenever she needs her to count her eggs or get free medical care for Nick. We all have that one doctor friend in our lives we’ve called at 2 AM when a weird rash appears where there should be no rash and we’re too scared, poor, or embarrassed to make an appointment with our own physician. Those 2 AM phone call friends deserve a front row seat at our weddings. But not only does Jess not invite Sadie to the wedding, she also doesn’t show up to Sadie’s son’s first birthday. Jessica Day is a godmother to this child, but she misses his big day because she was busy being melodramatic and setting her apartment on fire. Are you serious? I don’t think I’m channeling ancient mysticism here when I say that Jess is a freeloader and owes Sadie an apology. The very least she can do is get her godson a proper gift! (By the way, Nick was totally right. You don’t need to put the toy together. I speak for all moms when I say we return or re-gift half the shit you bring.)

That’s not the only time Jessica Day ruined a child’s birthday party, either. Let’s not forget that time she ran into her ex, Paul Genzlinger, when she was trespassing in someone’s yard to steal their water.

She convinced him, a birthday party clown at the very home she was stealing water from, to bail on the kids and instead join her and Cece on their walk of shame. I don’t know how she sleeps at night. Somewhere out there, a child is still waiting for a pie in the face or a fake spilled confetti bucket that will never come because some larcenous siren thought fit to lure Bobo away. She also owes that kid a gift.

Honestly if there is a reunion show, Jess should just go around apologizing to everyone and acknowledging her privilege.

I know this hurts, but bear with me. It’s important we recognize these traits in Jess, a woman who has branded herself as “quirky” and even self-effacing. Because here she is telling Cece that being a model is stupid… 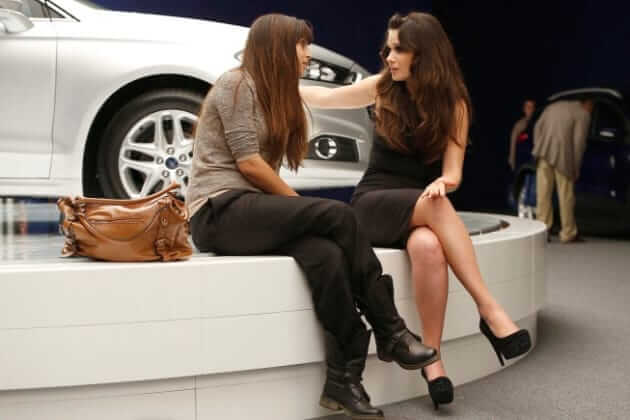 …and also admitting to Winston that she doesn’t think he’d make it as a cop. Excuse me, but who died and made you my high school career counselor?

What does Jess know about being a police officer that she’s so confident he’ll fail? Nothing. And when he does make the academy and wants to celebrate, she makes the day all about her because–once again–she’s sad. (See, for reference, turkey, Jamie Lee Curtis, permissive parenting.)

So what does she do? She plays martyr, telling Nick to keep their break-up secret when she has zero intention of doing so herself. She gets drunk, wears a catsuit, makes a scene, and here’s Winston, totally and utterly understanding and kind about it. Jess is the queen of manipulation and guilt trips.

Oh Winston, you beautiful, beautiful man. You deserved so much better.

This is what she does. Hijacks people’s happiness until they’re happy on her terms. Remember how she completely overreacted to Cece and Schmidt hooking up?

And when Cece and Schmidt did finally make it work, she was there ready to steal the show with her 7th grade boy drama.

At their wedding: I love Nick.

Cece and Schmidt are at the freaking bank getting a loan for a house: I still love Nick.

Even when they pleaded with her that they have to do this on their own, she gave them the classic Jessica Day guilt trip!

I get it. She’s basically my Persian Jewish mother, but cuter.

And lastly, I’m all for weirdness, but listen up, beautiful, smart, funny, manic pixie with perfect hair and gorgeous big blue eyes: you can’t have quirky. I don’t care how many colorful vintage dresses you own, how many blankets you crochet, or how big your black-rimmed prescription glasses are. You’re not fooling anyone. (Well, maybe you are, actually). Until you came along, quirky was the venue of outsiders. Those of us who tried to fit in and, when unsuccessful, chalked it up to being quirky. Quirky is a survival mechanism we employed to make our differences seem cute, rather than weird.

Just for the record, quirky can be hot. But hot can’t necessarily be quirky. I’m sure there is a peer-reviewed science paper that explains this.

And that about sums up my relationship with Jessica Day. Imagine you have a friend you’ve known for a long time. So long, in fact, that you don’t even realize this friend is more like a habit than a conscious choice. One day you look over at them and think, wow, you are awful. But by then it’s too late. Your relationship is cemented, you’re their emergency contact, their mother is your seamstress, and you will continue this charade until you’re dead. But honestly, it’s fine and you plan to do nothing about it. Jess is that friend to me.

So when Jake Johnson announced a possible reunion show, my first thought was “Come on! Hasn’t Jess ruined enough lives?”

My second thought was, YES PLEASE!

Call me masochistic, but I just love this show–even though Jess is the absolute worst. So I’m in. Let’s do this! Reunion. Spinoffs. You name it. Take my money.

Until then, I’ll be writing more bad takes about lovable characters who are actually garbage. I’m looking at you, Jim and Pam. 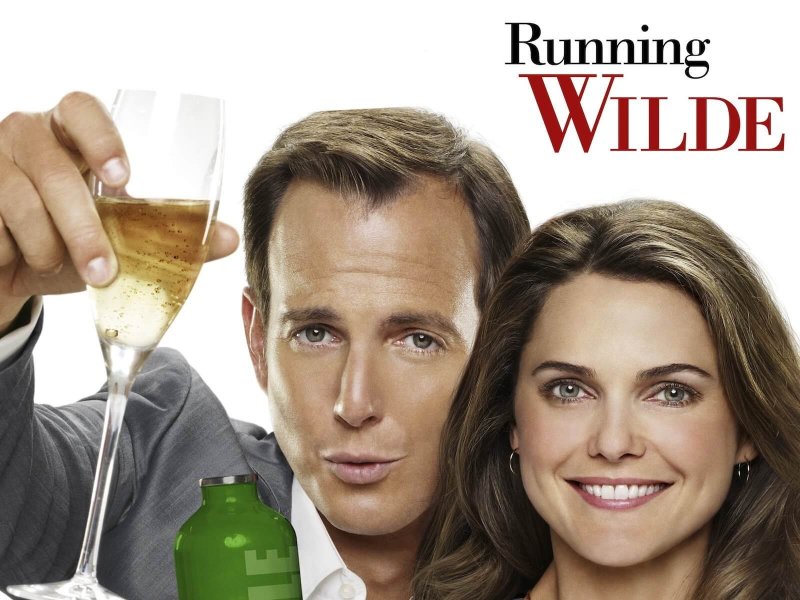 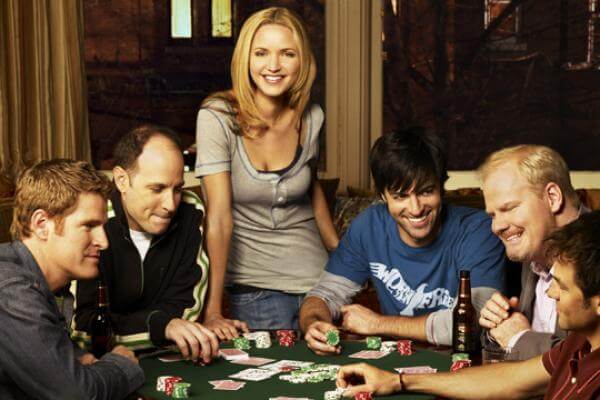