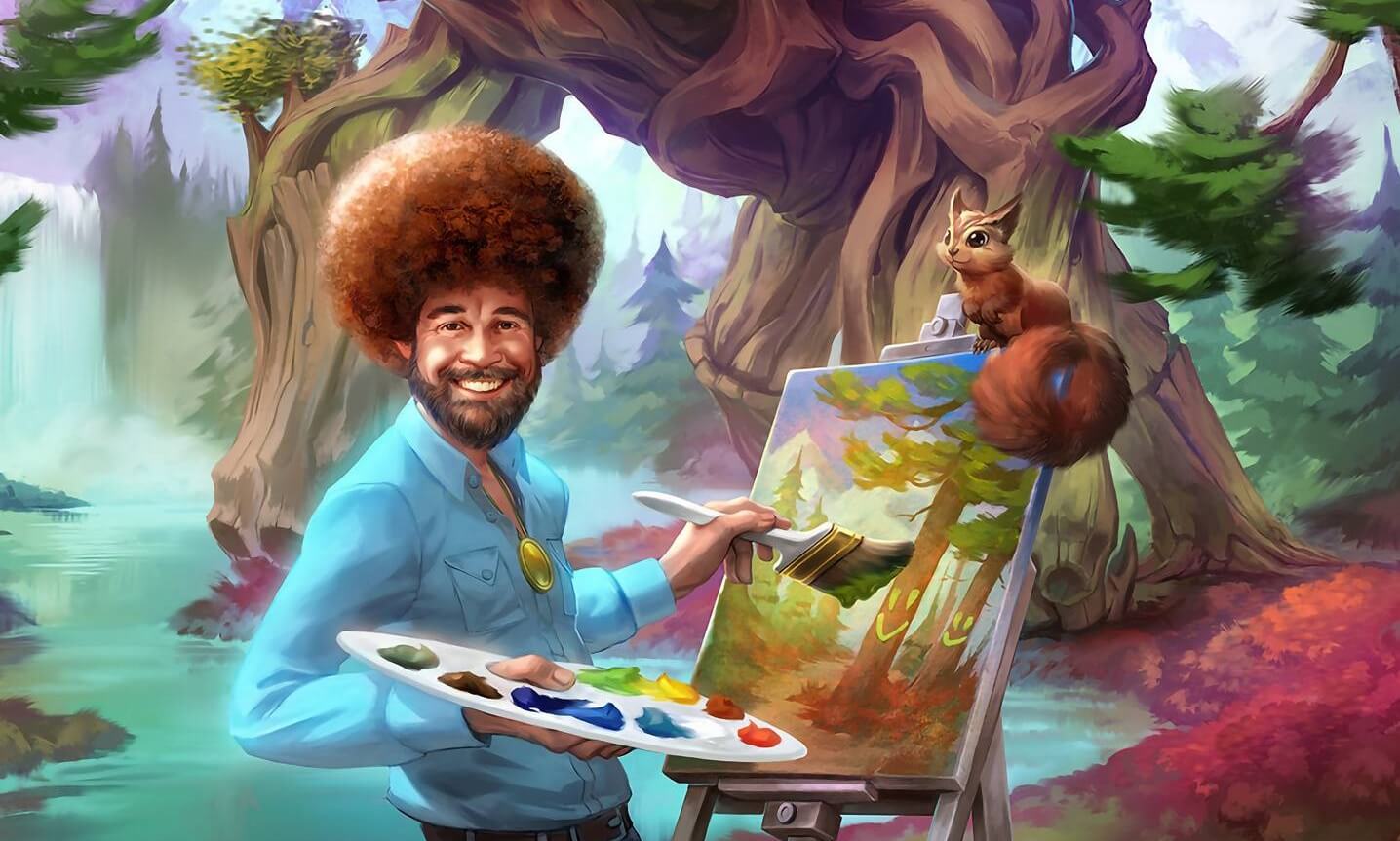 At first, it seemed like a great idea–I would try to follow an episode of The Joy of Painting with Bob Ross using the demo of a painting simulation game called SuchArt: Genius Artist Simulator. It’d be a glorious evening of learning new skills, digital painting, and vibing along with the calming voice of the host, Bob Ross. It was an experience I sorely needed as we disembarked from the holidays and zoomed toward the new year.

However, there was a problem with my plan: I’m absolute shit at digital painting.

This isn’t me being humble. I’m not bad at messing with charcoals, screwing around with acrylics, and smearing oil pastels all over my hands in real life. But digital painting has always befuddled me for some reason, even after years of off-and-on practice.

Yet I still thought this would work. Bob Ross was the king of oil painting, after all. His videos taught my dad how to paint beautiful landscapes, too. His instructions would be the cure to my digital painting woes.

I was proven wrong as soon as I booted up the game.

The broad appeal of Bob Ross Bob Ross became a pop culture icon thanks to his soft-spoken, super chill demeanor and encouraging instructions. His gentle voice guides viewers through the intimidating task of painting with oil paints–a feat that’s not easy to accomplish, especially in a 30-minute episode. Oil paints are notorious for having a painfully long drying time that can span days or weeks. This can become a bothersome obstacle for beginners because oil paintings typically have multiple layers, and you need each layer to dry before painting the next part.

But Bob Ross taught people how to paint using a wet-on-wet technique, circumventing the need to spend multiple episodes on the same painting. By following his instructions, anyone with the right tools could make a completed masterpiece after watching The Joy of Painting with Bob Ross once. His lessons worked so well that the show went international, running for 11 years over a span of 31 seasons for an impressive total of 403 episodes.

In each episode, you could expect to see Ross’s smile and a level of patience you wouldn’t see from your own mother. He was the physical embodiment of his famous phrase: “We don’t make mistakes, just happy accidents.” He knew it was easy for a budding artist to feel discouraged over each slip-up, and took care to remind viewers not to let it get them down. His soothing personality was one reason why online commenters sometimes call him the Mister Rogers for adults.

Personally, I’m familiar with Bob Ross because my father used his lessons to start his own oil painting hobby. Just like Ross, my dad’s Air Force career led us to settle in Alaska, and he felt so inspired by the natural beauty around us that he decided to pick up painting.

I never quite felt the same way at the time; mountains were neat to look at, but building small snow sculptures was cooler. (I still really like making snowmen to this day.) I didn’t get into oil painting when I had the perfect chance.

But, as they say, better late than never. I decided to give Ross a shot through a painting simulator, since I didn’t have any oil paints available to me. With my scant skills and Bob Ross’s expertise, surely I could make something great.

I booted up season 21, episode 03, of The Joy of Painting on my phone and the SuchArt: Genius Artist Simulator demo on my computer. I spent 30 minutes playing around with the game’s paintbrushes and the like, enjoying the smooth way the digital paint blended together. I didn’t expect the simulator to be a perfect replica of real paint, but it was neat to play with.

There were different sized canvases, brushes, a pail of water, and a hairdryer so players didn’t have to wait digital weeks for their layers to dry. I started out following Bob Ross to a T. I picked all the colors he listed at the start of the show–well, more like the closest equivalent to his colors–and started putting down the base and first layer.

And then I made a mistake. Followed by lots more mistakes.

Things went very wrong once I pulled out the palette knife. See, Ross likes to use the palette knife to carve out the outline of a mountain or create natural-looking splotches of snow atop jagged peaks. He also uses the knife to create cliffsides or stones scattered in the dirt. The knife can do all this without blending together wet layers the way a brush would. Unfortunately, I’m not nearly that skilled. And the demo’s tool was limited to a single size and angle. I completely underestimated the size of it and smeared an absolute mess all over the canvas, ruining the top half of everything I had done.

“We don’t make mistakes,” reminded Bob Ross’s ever-so-patient voice in my brain, “just happy accidents.” But my head refused to believe it, getting more stressed by the minute. There’s no way to make a giant, brown smear in the sky look anything other than…well, absolute crap. I spent the next 15 minutes fixing the mistake, wiping it down, thinning the paint, and then painting over it again. It took two attempts before I realized I wouldn’t be able to use the palette knife the way Ross wanted me to.

The next huge obstacle was the lack of a fan brush in the game. I couldn’t find a good replacement for it, something that could easily create the impression of bushes and pine trees in the distance. I did find a tool that made good, puffy-looking splotches, but it wasn’t quite right. What was supposed to be a 30-minute lesson turned into an hour-long struggle to figure out alternatives to real-life brushes. It was a big feat for someone who didn’t know how to draw digitally in the first place. Feeling discouraged and mentally exhausted, I slapped together the best I could do and called it complete.

I didn’t want to let it end there, though. Giving up after one try isn’t how you paint or play games.

I went through the same episode again, this time picking my own colors (I didn’t use half of what Bob Ross used) and using whichever brushes the game had available. It turned out better, though it still wasn’t as good as I wanted. But how pretty the picture turned out isn’t Bob Ross’s point, is it?

Ross was all about learning how to paint, yes, but he was also about owning your mistakes no matter how messy they are. An accidental line becomes a distinctive tree, a crooked stroke becomes a mountain edge, and the wrong color can become part of a plant. There was no reason to run away from painting just because you’re afraid of your mistakes.

It was the art of turning your mistakes into art. SuchArt has quirky little quotes that pop up on the title screen whenever you launch the demo. One features a unicorn that cheerfully suggests, “Always blame the tools!”

But I don’t blame SuchArt and its tools; plenty of other people have made beautiful pictures using the game, which has absolutely blown me away after my own experience.

your true genius will never be forgotten. only god knows what #suchart players would have to paint if there were no tutorials of yours to follow 🎨 pic.twitter.com/WRzcXW989H

If anything, despite my ordeal, both Bob Ross and SuchArt increased my determination to try oil painting in real life someday. And I’m really looking forward to it.

The Joy of Painting with Bob Ross