Panic offers up a hopeful solution to the student debt crisis: What if instead of saddling young adults with lifelong expenses, we simply have them compete to the death in a series of increasingly elaborate stunts? This is definitely a much sexier solution than anything you’ll get from any so-called “economist.”

Panic’s premiere episode is shockingly blunt in its opening. I can’t help but to applaud it on that note.

Amazon’s new prestige series begins with a voiceover claiming that “Every small town has a secret.” For Carp, Texas, that secret involves a game where recent high-school graduates perform deadly stunts in hope of a way out. Because, as we are told, “The losers stay here where losing is what we do best.” Cool. A very measured response on all accounts.

The neat thing about Carp is that it’s located in that part of Texas where no one has a Texas accent. It’s Austin by way of Toronto. There is one exception though. Our protagonist, Heather (Olivia Welch), has a mom that’s heavily coded to be “villainous poor white trash.” Or at least a version of that for someone who has never spent every meal in front of a television, been kicked out of a beauty parlor, or stolen food from work.

Heather’s mother (Rachel Bay Jones) speaks with a slight drawl. She smokes, asks to borrow money, and her shirts don’t have sleeves. She represents everything Heather hopes to escape. Welcome to Thrillbilly Elegy, the show about as subtle as J.D. Vance beating you in the head with a bottle of RC Cola while Larry the Cable Guy squeals like a pig. Heather is joined by her two best friends, Bishop (Camron Jones), the obvious love interest, and free spirit Natalie (Jessica Sula), who tries to toast to chlamydia at a party before burning her diploma in a fire pit. Natalie says she is relying on the $50,000 prize from the secret death contest to get her all the way to Hollywood. This may sound unbelievably bleak, but don’t forget lottery tickets. The existence of lottery tickets.

Heather has other ideas for achieving upward mobility. She just needs $6,000 to enroll in accounting at Longhorn State. Hook’em legally distinct Longhorn horns.

Bishop offers to loan Heather money, but he also encourages her to pursue her passion for writing. Suddenly, a hole rips in space-time. Heather from 20 years in the future reaches through the temporal tear and grabs her past self: “Whatever you do, don’t become a writer. In the future, books are just collections of tweets, and tweets are just billionaires manipulating the stock market for their own amusement. It’s Lois Lane. She’s the key.”

Seriously though, having just lost her job, Heather begins canvassing the town looking for gainful employment. Here is a screenshot of her resume for all the Panic diehards out there combing through the Panic subreddits for Easter eggs. Don’t say I never gave you anything.

Now when you’re at your next Panic trivia night, you won’t be stumped when the quiz master asks about Heather’s responsibilities when she volunteered at the soup kitchen. 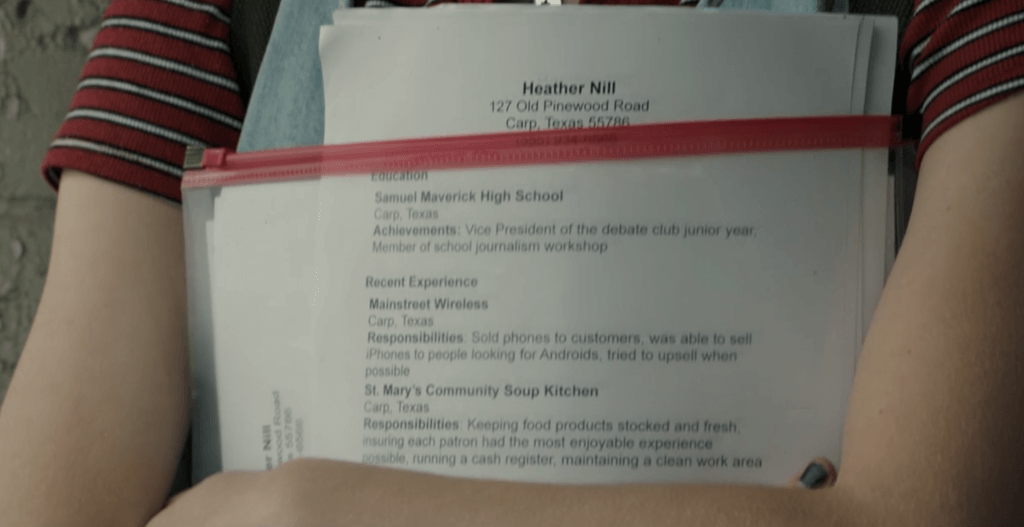 To give this show some credit where credit is due, it does provide an accurate depiction of how sucky the doors are in trailers. They all feel deceptively light and insubstantial like they’re made from those tri-fold foam poster boards you used in science class. That’s partially why mobile home doors have become the weapon du jour for backyard wrestling.

Panic’s premiere episode really shifts into gear when we get our signal from the mysterious judges that the contest is beginning. This comes in the form of hundreds of pages bearing an unknown symbol being dropped on the town. The kids know to gather at the cliffs.

The first challenge: The Jump.

Players are instructed to jump from a cliff to the swimming hole below. Fail to jump out far enough, and they will be crushed against the craggy bottom. Simple enough. I’m glad they aren’t making this into Saw. We have plenty of Saw already.

Anyway, all the teens are fit and beautiful in their choice swimwear. The Black Angels are playing in the background. We will be young forever and never die. All that glitters is surely gold. Back at the trailer, Heather finds her life savings are missing from her hiding spot. Her mother stole almost everything. After a heated confrontation, Heather packs a bag and rushes out the very — and I mean very — crappy door. She has only one option: win the contest.

Speaking of the contest, Natalie successfully completes her jump, while contestant Dodge Mason (Mike Faist) seeks a higher point to leap from in hopes of earning bonus points. Will this in fact be the “White Boy Summer” that Chet Hanx predicted so terribly?

Dodge survives the high jump. He is in the lead. We haven’t seen any contestants killed or wounded, so as viewers we haven’t been given any stakes to consider. When I was a teenager, we would buy katanas at the flea market and throw them at each other. And that wasn’t even for money. We were just bored, and our brains weren’t fully developed. Panic needs to raise the stakes on this.

A desperate Heather arrives at the cliffs. She climbs into position, only to hesitate. Earlier in the episode, Heather’s innocent little sister had alluded to fireflies leading lost girls through the darkness. On the cliffside, a firefly catches Heather’s eye, and she follows its light to Devil’s Point.

If Heather survives a jump from there, she’ll take the lead and gain immunity in a future challenge. I don’t know where this highly elaborate points system came from, but in true Panic fashion, a guy with a megaphone is announcing them directly to the audience.

Reaching the highest point on the cliffside, Heather looks out onto the crowd of her peers. They are screaming for her to turn back. She pauses, and a silence settles in over the crowd. This is it. All I can say is hurray for economic anxiety, right?! I can’t wait for next week’s episode of Lord of the Moonpies.

Here wait, how about The Hungryman Dinner Games?

Battle Royale with Cheese. Thank you.