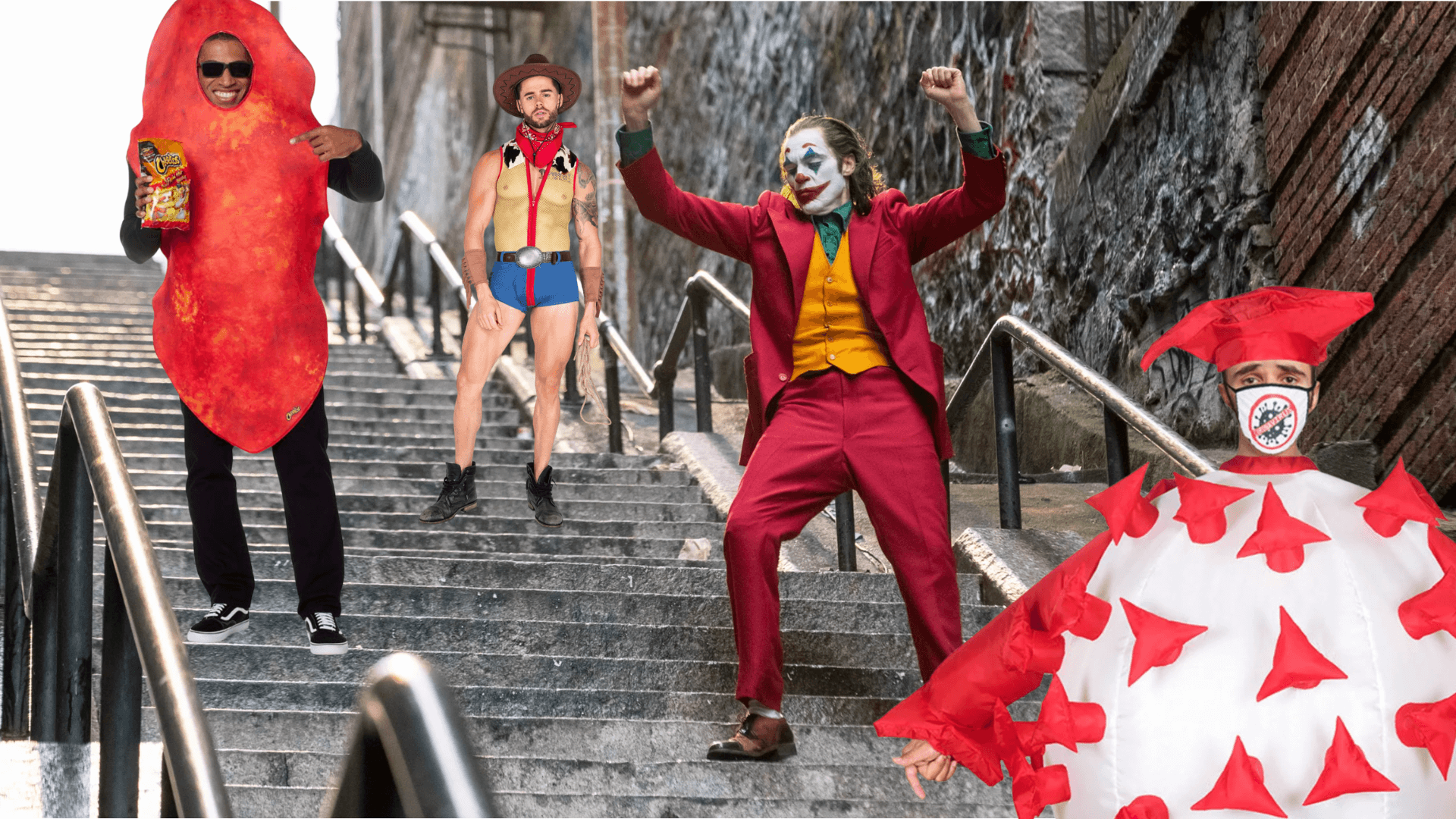 Back before the vile leftist plot to keep everyone from contracting a deadly plague and spreading it to frontline workers, the discourse around masks was much less heated. Largely, it consisted of costumed superheroes saying, “We all wear our own metaphorical masks,” and everyone thinking, “That’s hella deep.” But then there’s Halloween: a time when everyone can exercise their creative and fiscal means to come up with the costume of their dreams — and for many, their nightmares.

With that in mind, let’s take a look at some of the more questionable Halloween costume ideas inspired by popular culture. Suit up, everybody. One of my favorite things about Halloween is the utter sexual confusion that the holiday tends to generate. At a certain point, the urge to wear a sexy costume gets crossed with something completely disconnected and just renders the concept of sexuality meaningless.

Now keep in mind, I am not here to kink shame anyone. Especially on Halloween. Whatever a roomful of consenting adults do while dressed as Squid Game is not deserving of anyone’s judgement. But also, there seems to be a larger than expected number of sexy, mustachioed fictional characters this year. Such as Sexy Mario. Now you may need to consult your nearest Italian to determine if this constitutes cultural appropriation, but the larger question is whether or not you’ve ever thought of Mario as a sexual being. Well, thanks to this wonderful costume that part of your life is over.

And for those of you out there who are attracted to men, you don’t have to feel left out. Here’s two dudes dressed up as Sexy Woody from Toy Story. I’m sure you can hear the voice of America’s dad, Tom Hanks, whispering some real good dirty talk to you right now. “There’s a snake in my boot” indeed. We all love a good hot dog or banana costume. Those are just classics that never go out of style. But what if you could dress as food while also serving our corporate overlords? You’re in luck.

With this White Castle chicken rings costume, you can pay $59.99 to spend the evening as a walking advertisement for one of the famous slider chain’s lesser-known menu items.

Why is the chicken in ring form? I don’t know. But you can pose that mystery to everyone you meet this Halloween. Of course, there is also a slider costume available from White Castle, but that feels a little too obvious. Remember the most important part of any great Halloween costume is its inexplicability. If you opt for this costume, do remember to carry with you a large, very visible bag of Flamin’ Hot Cheetos. Otherwise you will soon be known to all your fellow partygoers as “the dude dressed as a giant red turd.”

The Pandemic Has Broken Our Brains

For many, this Halloween may be the first opportunity for direct social interaction in many months. In that time, you’ve likely forgotten a lot of the finer points of human communication and societal norms. But how can you tell people “I’m so sorry. I’m not usually like this” without a word? Consider these pandemic-inspired costume ideas.

First, we have this medical mask bikini top. If you like a flimsy halter top, but also the risque application of medical protective gear, then this is just the thing for you. Just remember to keep your nose, as well as nipples, covered.

Next, we have the option to dress as a vial of COVID vaccine. You’re sure to strike fear in the hearts of all those adult trick-or-treaters out there who are certain that the vaccines are the mark of the beast foretold in Revelation 13:17, but also make them magnetic 5G conduits. Wrapping up the pandemic portion of our presentation, we have the absolute worst option. No, your eyes aren’t deceiving you. That’s a man dressed as the coronavirus. Folks are selling this and expecting you to wear it in public. Please don’t do this.

There are many bad choices you can make when selecting a costume, but please don’t be that guy. Every year, there’s always at least one guy who gets photographed while wearing the most inappropriate costume, and everybody on the internet has to look at it and wonder what his parents did to him. Don’t fall into that trap just for the attention. Instead, I don’t know, hire an escort to act interested in your stories from high school.

Those willing to spend in the thousands can get themselves a larger-than-life costume that’s sure to make an impression. Check out this Hulk costume that stands at around six foot nine. Can’t you see yourself now, lumbering around the crowded apartment of your girlfriend’s friend, knocking pictures off the wall and spilling everyone’s drinks. Always wanted to resemble your favorite superhero while also needing help every time you need to go to the bathroom? Well, this is the costume for you. But if you want to make it all the way to seven feet, you’re gonna want to get this Colossus costume. What better way to test whether your body will suffer a heat stroke before you suffocate? Seriously though, doesn’t this remind you of something? It’s hard to quite put my finger on it, but this definitely resembles someone. Halloween offers a unique opportunity for people to embody their favorite character from TV and film. And that character is never Georgie from the It franchise. It says a lot about a person to be a fan of the It movies and opt not to dress as Pennywise. It’s probably a sign of a crippling self-esteem issue, but that’s part of the fun of Halloween.

Speaking of depression, you can spend the holiday dressed as your favorite dystopian sex slave with this Handmaid’s Tale outfit. I know this seems like a grim fashion statement to make during such a festive time of year, but the way things have been going, you might as well just own it.

Also this sort of outfit can be used outside of Halloween activities. Maybe you want to start an all-female folk ensemble or join a polygamous sex cult. Perhaps you’ve been cast in an Ibsen play or have opened a used book store that sells healing crystals. The sky really is the limit with this outfit. Next we have a Stranger Things-inspired couples costume. One of you gets to be super-powered standout Eleven. The other gets to be a waffle. Because she loved waffles.

Honestly, looking at this doesn’t make me think Stranger Things. At first glance, it comes across as a woman who hates breakfast.

I wrap things up with a very special final entry. As many of you know, we live in a society. And sometimes when the good guys have had enough, they spend $25,000 on a Joker costume.

Yes, the problem with this doesn’t really stem from the costume itself. It’s more just the thought of someone spending that much money to capture the look of Joaquin Phoenix as a troubled comedian/poster boy for the incel community. Think about it. For that much cash, you could get more than 600 Flamin’ Hot Cheeto costumes, 500 sexy Marios, or any number of more fun outfits.

It’s Halloween. So ask yourself: Why so serious? Fred 2: Night of the Living Fred