Likely, like me, you’ve spent the entire year being beaten back by a sea of troubles, and now find yourself washed ashore to 2021. This brings us back to your resolution, which is like a curse you give yourself.

Most common among New Year’s resolutions is the declaration to “get in shape.” So with that in mind let’s review the sad, yet inspiring tale of plump attorney Billy Halleck from the 1996 Stephen King adaptation Thinner. Thinner was helmed by Child’s Play director Tom Holland, who, fresh off directing The Langoliers TV miniseries, wanted to see if he could make an even worse King adaptation. Thankfully, he was unsuccessful.

The first words spoken by our rotund protagonist are “gypsy caravan,” which is a bit awkward these days because of, well, racism. To be honest, I don’t really expect the characters in this mid-’90s horror parable to display any sort of cultural sensitivity to the Roma. But a clear problem arises when a bigoted judge accuses the town’s new visitors of being disease-carrying thieves who plan to curse everyone, and then the movie shows them actually curse everyone. You are not doing what you think you are doing, Stephen King.

Moving on, our protagonist is played by Robert John Burke, who aside from portraying Robocop one time seems oddly familiar. Wait a second. He’s the head of Bass Industries in Gossip Girl. That is until he loses a “low talking” contest to his son Chuck and has to fake his own death. 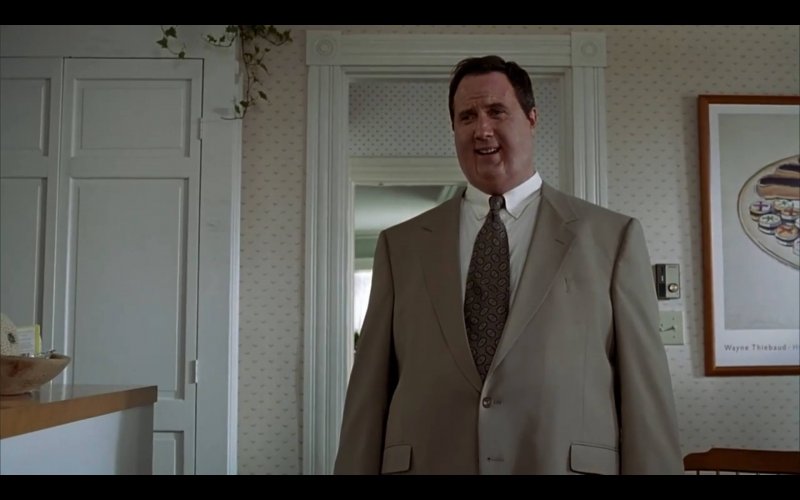 Anyway, the portly Mr. Halleck Esq. opens up the movie by successfully defending a guilty mob boss while also successfully failing to lose any weight on his diet. Arriving back at his office, Halleck (henceforth known as “Thinner”) sees that the Roma have set up a carnival in the town square. Remarkably, they have also managed to have flyers designed and professionally printed in the few hours since reaching the city.

Driving home from a celebratory dinner, Thinner’s wife distracts him with oral sex and he runs down an elderly Roma woman. Thinner’s judge friend fast-tracks a coroner’s inquest, and the corrupt system absolves him of his crimes. Of course, this results in Thinner being–sigh–cursed by the elder Roma.

Really this movie is like if The Crucible turned into a supernatural thriller in the fourth act and Goody Proctor started making people’s heads explode. Imagine 12 Angry Men, but everybody decided it was important that Juror 7 made it to the baseball game. This is the movie that asks the question: What if Lex Luthor was right about Superman?

Let’s take a moment to discuss the crux of Thinner and many people’s goal for the new year: weight loss. Our main character manages to drop 20 in no time after being cursed, which seems like a pretty good deal. After two weeks, he’s lost almost 50 pounds. Remarkable. How does he do it?

After dropping 100 pounds and fearing for his health, Thinner visits the judge to find he has mysteriously been transported to the Mayo Clinic for an undetermined skin condition. In truth he is turning into a lizard man. Yep. You’re right. It’s a gyps–nope–it’s a Roma curse. Roma! Thinner begins to follow the Roma in hope of removing the curse, and since this is a Stephen King story, they are headed to Maine. Honestly, I’m surprised that at this point King hasn’t written about a demonic, pan-dimensional lobster roll that eats dreams.

By this point, Thinner has to binge all the time to stay alive like he’s the Flash. This movie should become mandatory viewing for all those “calories in, calories out” people.

Thinner finally calls in a favor from his mob connections, who carry out vengeance on the Roma clan. Things escalate, while somehow not managing to raise tension. It’s a magic act.

With losses on both sides, the Roma patriarch and Thinner reach an agreement: Thinner can transfer his curse to anyone who eats the mystical pie he receives. That’s an oddly whimsical bit of sorcery, but why not have some fun with your revenge magic? So, Thinner just drives all the way back home with a cursed pie, which he plans to feed to his unfaithful wife. But he looks great!

Honestly, I would have loved for a lengthy travel montage where we see Thinner struggle not to eat the evil pie buckled in next to him, while “Return of the Mack” plays in full. It’s a missed opportunity.

Of course, Thinner feeds his wife the pie and finds her dead and shriveled next to him the following morning. Luckily, there’s never any sort of twists in these stories. Justice–or something like it–has been served. But wait!

Thinner’s daughter arrives out of nowhere. She has eaten some pie. She’ll be dead soon. As these stories go, Thinner’s been hoisted with his own petard, or–ahem–foisted with this Roma custard. Happy dieting, everyone! And a happy new year.