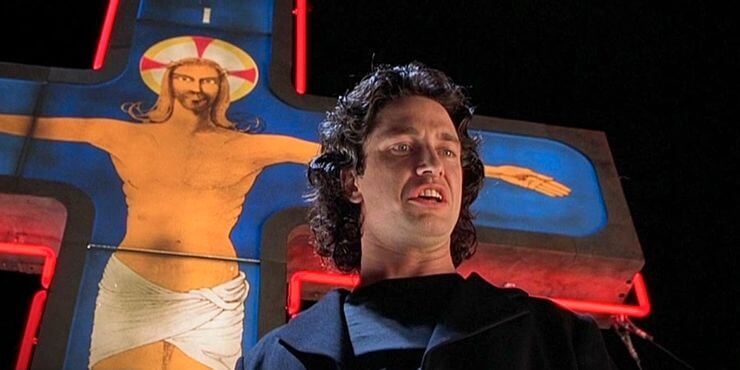 A truism of good mysteries is that the ending should be surprising but inevitable. A truism of the film Dracula 2000 is that the truism about mysteries must have slept with Wes Craven’s girlfriend because it’s the only reasonable explanation for how Dracula 2000 came into existence. It’s a movie that is on its face so hated by its own creators that the movie Prometheus looked at it and was all, “Hey, guys, we get it. Sometimes people regret the things they make.” And it’s fantastic. Somehow the fates aligned back in 2000 to convince the wildest roster of actors ever to team up with producer Wes Craven in making an update on the classic Dracula story. By “update” I mean Gerard Butler plays Dracula eye-banging his way through modern-day New Orleans during Mardi Gras in search of a lost love, and by “wildest roster of actors” I mean the aforementioned Butler, Omar Epps, Jennifer Esposito, Jeri Ryan, Sean Patrick Thomas, and Danny Masterson. Oh, and appearances by Shane West and Lochlyn Munro because the ’90s still had their teeth in this production. But then also the classic acting trio of Jonny Lee Miller, Christopher Plummer, and Nathan Fillion. Because why wouldn’t Christopher Plummer be there? (I’m going to assume it’s some form of blackmail and/or literal black magic because there’s almost no reasonable excuse for why those people would all be at a wrap party together. No reason.)

I’m not going to bore you with things like “analysis” or “critique” or “plot” because literally none of those things matter. Gerard Butler starred as the titular Dracula in Dracula 2000, a movie that in 1999 felt somehow dated. And again, it’s fantastic. If you really need to know what the movie is “about,” watch this trailer.

That’s so, so much more coherent than the actual movie itself. Ok, all on the same page? Awesome. Let’s get to the important part: The Whys.

(This is where I’d usually give a spoiler warning, but I don’t feel comfortable doing that here. For starters, this movie is twenty-one years old. If it’s old enough to drink, it’s old enough for you not to be worried about learning too much about it. Two, implying that not knowing the plot points of this movie would make it better would constitute Internet Writer Malpractice, and I can’t in good conscience do that. Your enjoyment of the movie will not be changed by something like “knowledge.” It simply is.)

Why #1: Why Did You Do This, Christopher Plummer?

Did you catch that Christopher Plummer was in this? Academy Award winner Christopher Plummer? I-Was-In-The Sound Of Music Christopher Plummer? I’m not trying to knock the guy too much, I just want to know what he was thinking. Or what blackmail someone had on him. Sure, when you have a career as long as Plummer’s, you’re going to make a couple of duds, but there are duds and then there’s “playing Matthew Van Helsing, grandson of the famous Abraham Van Helsing, oh wait no, I’m actually Abraham Van Helsing, the guy from Bram Stoker’s book who fought and captured the real-life Dracula, an actual vampire, and now I use Dracula’s blood to stay alive until I can figure out a way to kill him.”

So two things: One, I was right about how the plot doesn’t matter. And two, why, Christopher Plummer?

Now, given the bit of plot I just revealed, you might be thinking the story resolves itself by giving Dracula an overdose of Vitamin C and killing him. Or maybe it’s that they deprive him of Vitamin C, and he dies of scurvy. It does not. What I mean is, the singer of the song “Graduation (Friends Forever)” has a large role in this movie. This woman. But aside from not understanding why singer Vitamin C is in this movie, I don’t understand how the timing worked. “Graduation (Friends Forever)” was released in March 2000. Dracula 2000 was released December 22, 2000 (really getting it in just under the wire, huh?). So why is she here? Did the producers cast a mostly unknown singer to play the female lead’s best friend months before her notable single was released? Or was this movie so wildly rushed that it all took place betwee–oh, it’s the second one?

This is one of those cases where now I know the why, and it’s somehow worse. But actually, since I have the IMDb page open, let’s knock this one out.

Why #2B: Why an Antiques Dealer?

Abraham Van Helsing, accidentally poisoned by some of Dracula’s blood and therefore forced into almost eternal life by his need to finally slay the vampire, uses a cover as an antiques dealer to hide all of his “trying to kill Dracula” needs. He’s helped in this job by an unaware Jonny Lee Miller, who really likes old crossbows but doesn’t know anything about real vampires. Miller’s character, Simon, obviously gets sucked (pun intentional) into the vampire-fight lifestyle and has to kill Omar Epps (at this point, I genuinely cannot believe the number of people with careers who were in this movie). After killing Epps, Miller shouts, “Never, ever f*ck with an antiques dealer.”

So here’s a thing, why? Why wouldn’t you f*ck with an antiques dealer? Are they notoriously known within the dealer community to be the most badass? Is this a thing? And if it is a thing, why?

The reason it’s a thing:

Because this is how Miramax rolled in the early 2000s. Just a ragtag bunch of moviemakers pulling in pop stars for leading roles and rewriting scripts on the fly.

Why #2C: Why So Many Shirts, Jonny Lee Miller? 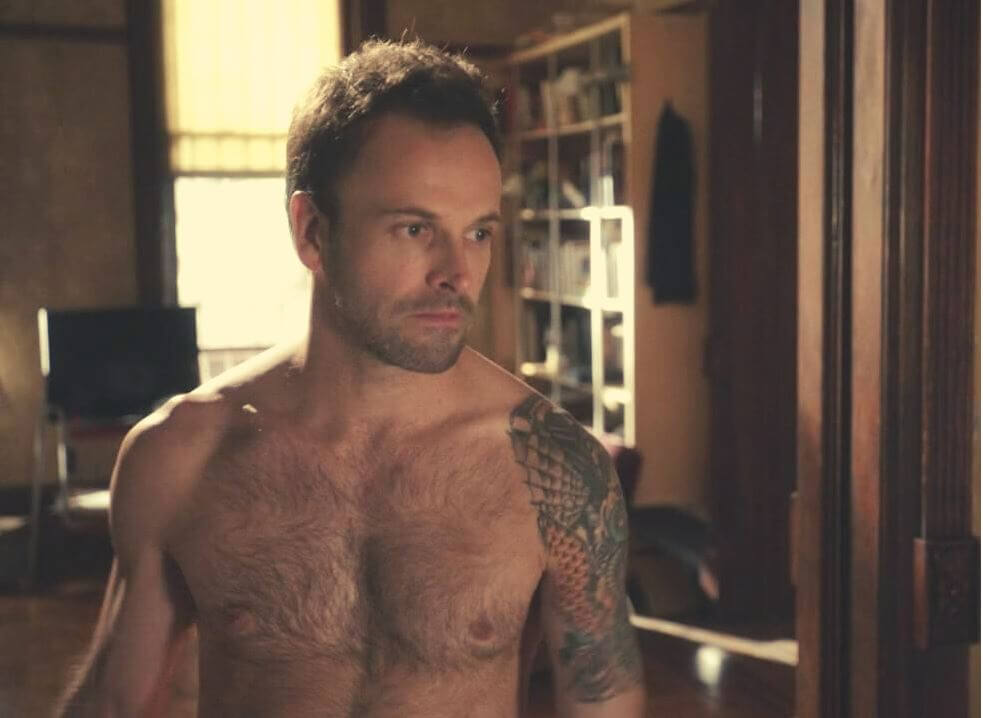 If JLM’s shirtless self is good enough that Angelina kept him on dick-retainer for fifteen solid years, it’s good enough for goddamn Dracula 2000.

Why didn’t I know?

Remember at the beginning of this post where I said that thing about good mysteries being surprising but inevitable? And then I promised you I wasn’t going to talk about the plot? I’m going to talk about the plot, but just a little. At this point, I need to tell you that the entire movie is 99 minutes long. I’m generally a person who feels like even the best movie needs a heavy-handed editor and I can’t believe I’m going to say this, but the movie needed to be longer. Or more accurately, the movie’s timing needed to be drastically reworked. Here’s a rough visual breakdown of the plot of the movie.

You catch that part at the end? Because they spend the first twenty minutes establishing who Van Helsing is and showing us Dracula’s coffin being stolen by a team that includes Sean Patrick Thomas, Danny Masterson, and Jennifer Esposito for the early aughts hat trick; the next sixty minutes in various, terrible, vampire fights; and then, in the closing fifth of the movie, they drop on us that Dracula is Judas Iscariot, the betrayer of Christ Jesus.

I mean, there maybe could be an interesting take on how scholars over the years have interpreted the anti-Christian mythology surrounding vampires as an allegory for how those who are evil will hate good, and the reality is that vampires are just literally spawned from an evil act. Or they could have done a movie about how Judas’s pain and grief over his betrayal made him evil (even though I think that was the whole point of the Bible story about him killing himself). I’ll absolutely allow that there could have existed an interesting movie centered around Judas’s dealing with the fall out of his decisions and the violence that would have inflicted on his soul. But instead we got, “Yo, what up? It’s your boy Judas. Me and JC have been majorly beefing for two millennia!” And then that’s it.

Gerard Butler’s face looks like this in every single scene. Why? Who told him to do that? What made them think that was a good decision? When were they fired? Why?

In closing, I don’t know. I just don’t know. Maybe this was the secret “why” all along? That in order to truly get a modern audience to question the very nature of their existence, you couldn’t rely only on the text of a movie, but needed to get into their very soul by forcing them to ask deeper questions by forcing them to confront the very “why” of who and what they are? Or maybe some jag just thought Dracula 2000 was a funny title. Either way, you should watch it because you cannot reasonably expect me to be alone in this. 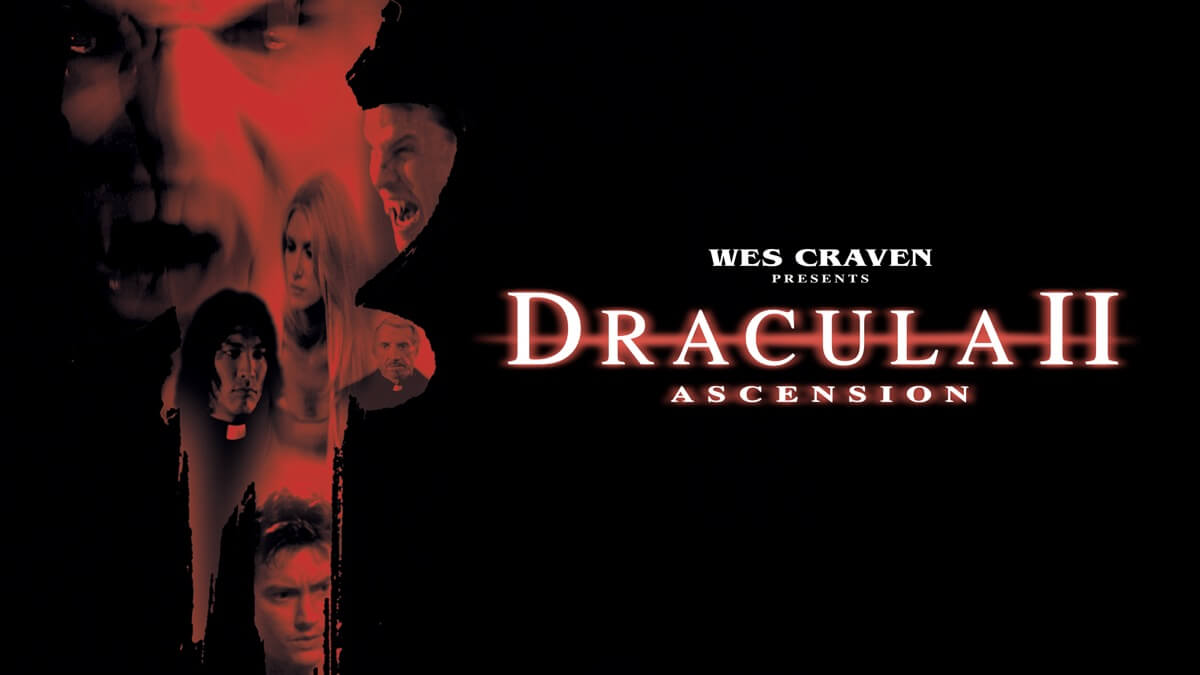 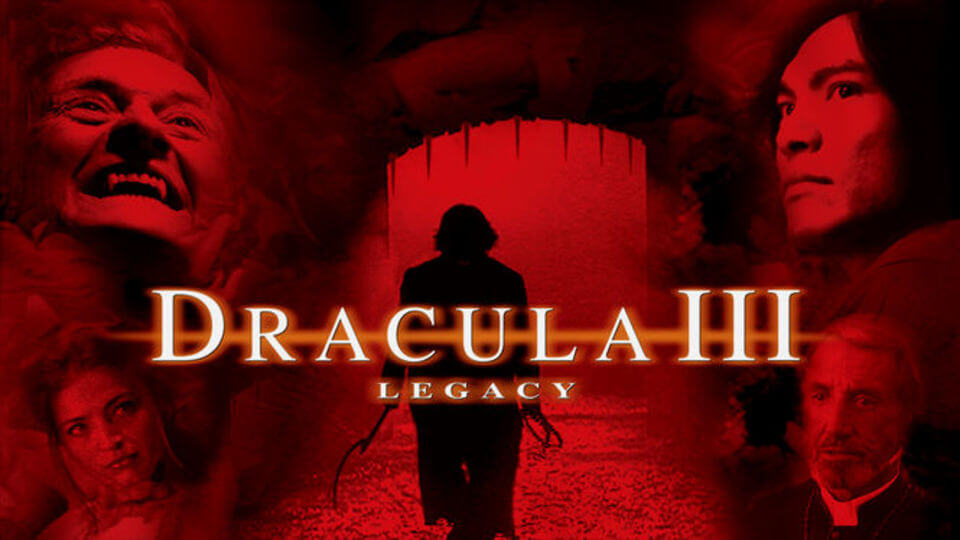