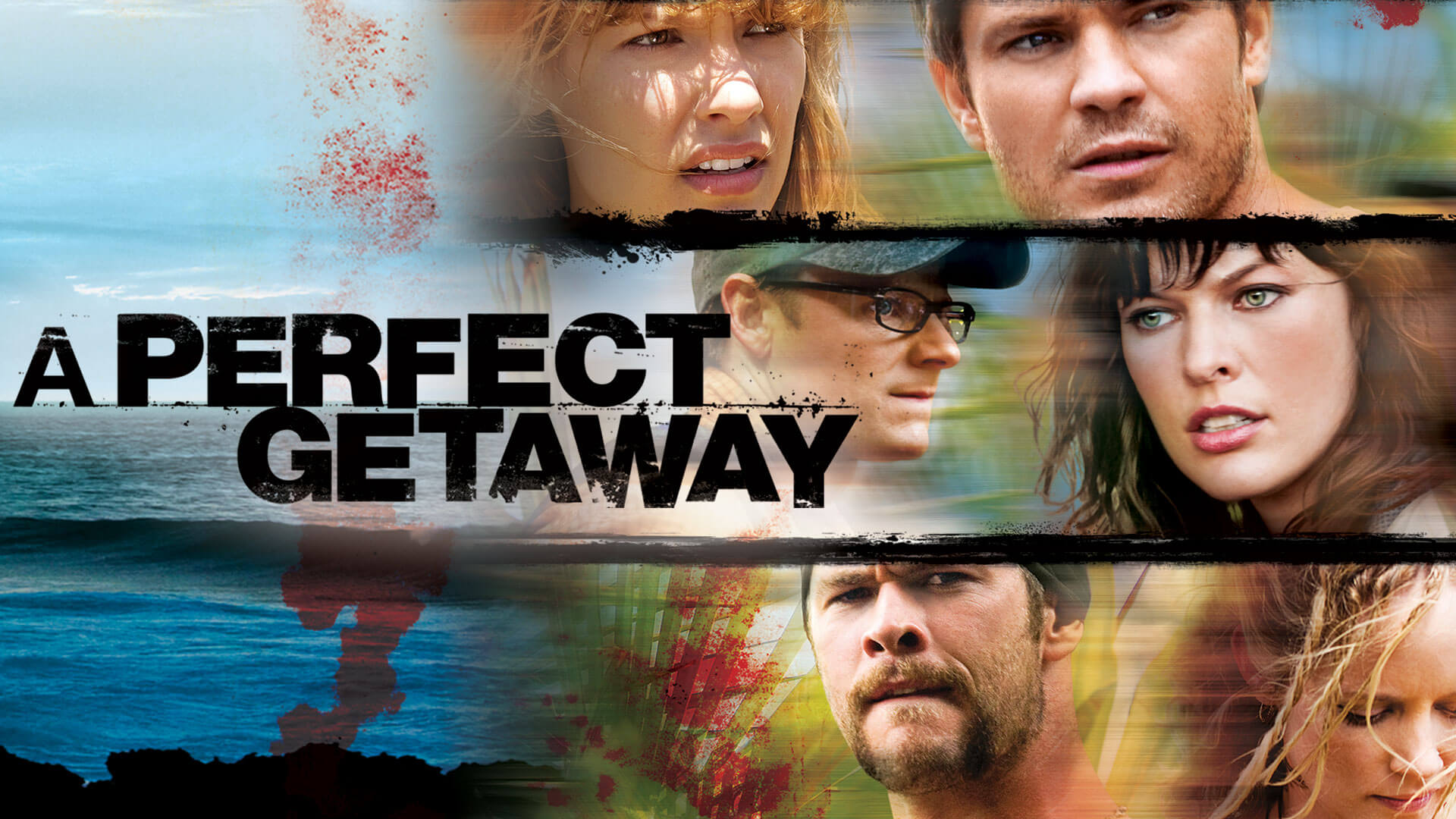 These aren’t really the words we think to use when we talk about things that we enjoy. Yet we still all have a few favorite films that fit these criteria, don’t we? You know the type I’m talking about. We’re perfectly aware of their shortcomings, their ridiculousness, and all the ways we can easily see how they could be better. But we still can’t help but love them. There’s something in their alchemy that makes them sing, with even the dud notes somehow working in harmony with the rest of the piece.

For me, one such film on my mind right now is A Perfect Getaway. A truly ludicrous, not really recommendable, objectively Not Great 2009 movie starring Timothy Olyphant, Milla Jovovich, Steve Zahn, and a pre-mega-fame Chris Hemsworth. This is a movie that, for all its shortcomings, I find literally impossible to turn off if I ever happen upon it playing in the wild. Because you see, “objectively” speaking, A Perfect Getaway is solidly middle-of-the-pile. Some might even say it’s “just” entertaining trash. Rotten Tomatoes scores are a terrible and reductive way of judging any film’s quality–and yet A Perfect Getaway’s 62% critic rating and 52% audience score is right on the money. The funny thing is that all of these things remain true at the same time as A Perfect Getaway being–in its own way–perfect.

A Perfect Getaway was written and directed by David Twohy. Twohy’s credits in Hollywood are a mixed bag. On one hand, he wrote the pulse-pounding Harrison Ford classic, The Fugitive. On the other, he also penned the jingoistic Demi Moore-led dud G.I. Jane. His output tends to vary wildly, sometimes within the same series, responsible as he is for bringing into existence both the fondly remembered space horror Pitch Black and its less well-received sequels, The Chronicles of Riddick and Riddick.

As a writer, Twohy often trades in the pretentious (Waterworld being a notable example) and the trashy. A Perfect Getaway does away with the former and tends more towards the latter tendency, but it manages to keep things on just enough of a restrained leash long enough for a compelling tension to gradually ratchet up, building to a fever pitch that plays out–and I’ll go into no further spoilers here than this–over the course of an extended and bloody climax.

The film follows newlyweds Cydney (Jovovich) and Cliff (Zahn) on a honeymoon trip to Hawaii, specifically the gorgeous island of Kauai, often referred to as “The Garden Island,” which the official Hawaiian website describes–without much hyperbole–as “draped in emerald valleys, sharp mountain spires and jagged cliffs aged by time and the elements. Centuries of growth have formed tropical rainforests, forking rivers and cascading waterfalls!” Kauai is a striking backdrop and Twohy and his cinematographer Mark Plummer make the best use of that verdant landscape, making it shift and pulse with hidden, creeping menace, gradually morphing the idyllic paradise into a depopulated and dangerous killing field as the film goes on. A breadcrumb trail of hints that something is eventually going to go very wrong is dropped throughout, tantalizingly leading us further down the rabbit hole of impending danger.

But things don’t start out that way, of course. Before we reach the chaos, we have to establish what the calm looks like. We have to believe and care about Cydney and Cliff first, and so the movie opens with home footage of a joyous wedding reception followed up by a montage of the pair having fun on their trip. From what we see, they come across as a lovely, grounded couple. He, a little bit insecure and fussy; she, lively and quick to laugh. As part of their romantic getaway, the couple are on their way to what is meant to be a spectacularly beautiful secluded beach at the end of a difficult hiking trail. At its most basic, the film is made up of the interaction between three couples. There’s Cydney and Cliff, of course–both played with total conviction by Milla Jovovich and Steve Zahn–but it’s when the other two pairings are introduced that A Perfect Getaway shifts into another gear.

The lighthearted sheen of the film’s opening drains pretty quickly, as reports of a double homicide of an unidentified couple in the area become inescapable. With a man and woman being suspected as the killers, Cydney and Cliff must contend with the suspicion and fear being cast over the new acquaintances they bump into on their journey. Is there something off about bubbly and overly friendly Cleo (Marley Shelton) and her foul-tempered boyfriend Kale (played by Chris Hemsworth’s handlebar moustache)? Or what about former special ops soldier Nick (Timothy Olyphant, always great), who always seems too keen to reach for his knife, and his girlfriend Gina (Kiele Sanchez)? Why does Nick keep going on about screenplays and red herrings? The joy in A Perfect Getaway lies in being put in Cydney and Cliff’s shoes, nervously trying to suss out which of the strangers you are essentially stranded with might well end up causing your fatal disappearance. None of this would work if the actors didn’t sell it, but happily that is not the case here, with Zahn in particular eating up the role with delectable relish and all the other principal players in fine form throughout.

A Perfect Getaway is nothing like a masterpiece. It doesn’t need to be. What it is, is a delicious little treat, full of clever writing, sweaty menace, sunburned tension, and twists and turns aplenty that make it impossible to look away. It’s trash done right, and there’s a lot to be said for that.

Looking for more from David Twohy? Check out Warlock: The Armageddon on Plex.

Return to the Blue Lagoon