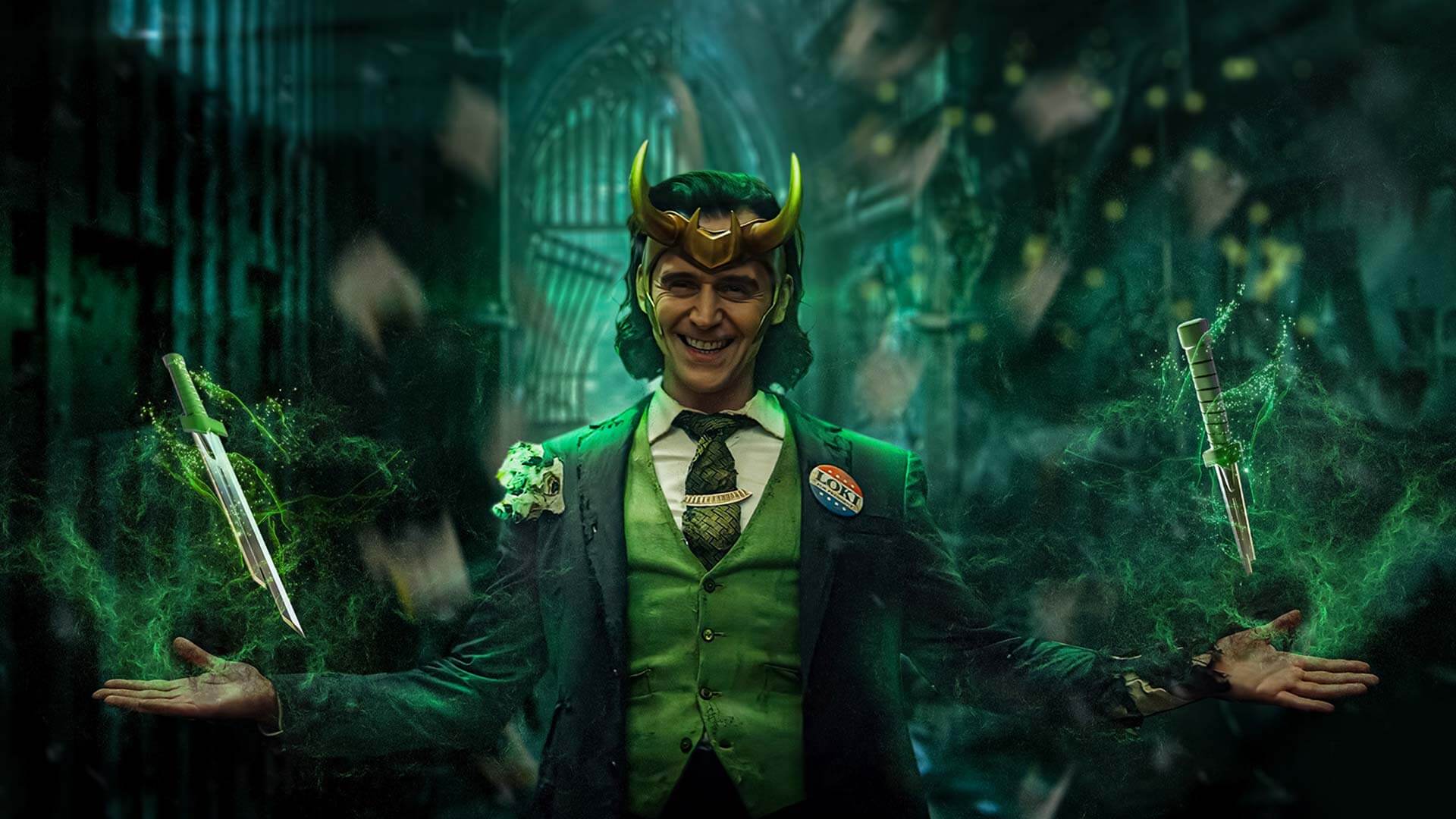 The MCU’s third Phase 4 Disney+ series kicks off this week, and while following huge hits WandaVision and The Falcon and the Winter Soldier might seem daunting, all signs point to Loki being another fantastic show. This time around, their not-so-secret weapon is Tom Hiddleston, whose Loki has captured audiences with his wicked humor and magnificent charm. The series set-up is part buddy-cop comedy and part sci-fi, time-crime, whirlwind adventure series, and before you get started watching, here’s what you need to know.

1. Marvel’s six-part Loki series explores what happens to the alternate (Variant) god of mischief we saw stealing the Tesseract in Avengers: Endgame, which is different from what happened  in 2012’s Avengers (wherein Loki temporarily surrendered to Steve Rogers, Tony Stark, and Natasha Romanoff). Obviously, this Loki is not the one killed by Thanos in 2018’s Infinity War.

2. At the time Endgame was in production, there were no plans for Loki to have a show; the escape setup was only created to force Tony and Cap to have to go further back in time (the 1970s) to obtain the Space Stone. While Marvel Studios head Kevin Feige and former Disney CEO Bob Iger had figured out the idea for the series by the time Endgame was released (it had been filmed back-to-back with Infinity War, starting in 2017), Tom Hiddleston didn’t find out about the series plan until after he’d completed filming in spring 2018.

3. The new timeline does, however, find “Variant” Loki captured again, this time by the notorious Time Variance Authority (TVA). The organization, which operates in the Null Time Zone (outside of time), oversees multiverse realities and strives to keep temporal interferences to a minimum — meaning its members are able to stop others from altering timelines, and can also cut any they deem unnecessary.

4. If you’re wondering why the TVA didn’t stop the Avengers from time-traveling to defeat Thanos, Hiddleston explains: “The TVA has a way of looking at time unlike anybody else. They have something called a sacred timeline. Within that sacred timeline, the TVA has predetermined what has happened in the past, present, and future. And no matter how convoluted this timeline is, the TVA views it as a linear sum of events. It means that even if the sacred timeline has people travelling back in time, the TVA allows it since it is an integral part of that timeline.”

5. The “sacred timeline” was referred to in a 1990s X-Men comic arc; a term used by Rachel Summers, mother of Clan Askani, who said that the timeline must be preserved and nurtured through careful time travel. (Many fans believe the Avengers defeating Thanos is part of the sacred timeline, and therefore protected by the TVA.)

6. There are those (Morlocks, Kang the Conqueror, Alioth) over whom the TVA has no power, but Loki ain’t so lucky. The agency arrests our Asgardian prince in order to help catch a killer and fix all the timelines he’s confused since escaping S.H.I.E.L.D.’s custody. 7. Owen Wilson plays Mobius (Moby) M. Mobius, a TVA analyst who almost lost his middle-management job when he apprehended the Fantastic Four for time crimes and they later escaped his custody. Luckily, the Four didn’t hold a grudge–they helped Moby lock down a better job, causing his boss to counter-offer with a promotion. 8. Kevin Feige believes Loki and Mobius will be “one of the most popular pairings we’ve ever had at Marvel” and Owen Wilson likens their dynamic to “Nick Nolte getting Eddie Murphy out of jail in 48 Hrs [1982] … It’s a little bit of a chess match to gain Loki’s trust, but in that shared endeavor, there’s an interesting dynamic.” Of Mobius, Tom Hiddleston says he holds “the highest academic honors in the studies of Loki.”

9. Other members of the TVA include Gugu Mbatha-Raw (no stranger to timey-wimey shenanigans, she played Tish Jones — Martha’s sister — in Doctor Who) as Judge Ravonna Lexus Renslayer and Wunmi Mosaku (Luther, Lovecraft Country) as Hunter B-15. Interestingly, both actresses have appeared in episodes of Black Mirror (“San Junipero” and “Playtest,” respectively). Note: Ravonna Renslayer is a love interest of Kang the Conqueror, leading to speculation that we may see him before his first scheduled appearance in Ant-Man and the Wasp: Quantumania (played by Jonathan Majors).

10. In the comics, most members of the TVA’s upper management are genetic clones of (as an homage to) Marvel writer and continuity editor Mark Gruenwald.

11. Head writer Michael Waldron (Rick and Morty, Doctor Strange in the Multiverse of Madness) has previewed that each time-jumping episode of Loki will have specific film aesthetic inspirations, such as 1982’s Blade Runner, 1995’s Before Sunrise, and 2002’s Catch Me If You Can.

12. Filming for the TVA headquarters took place at the Marriott Marquis Atlanta, aka “the pregnant building,” where parts of The Hunger Games film series were also shot.

13. To get things started with Loki director Kate Herron (Sex Education), Hiddleston gave her a course in “Loki school,” recounting the character’s ten-year MCU history. “I asked him to basically talk through his 10 years of the MCU — from costumes to stunts, to emotionally how he felt in each movie. It was fantastic.” (Herron)

14. Writer Michael Waldron has affirmed that Loki could easily run into another version of himself, saying “You can literally hold up a mirror to your characters. Perhaps they can encounter other versions of themselves at different points in their lives. In the case of Back to the Future’s Marty McFly, he can encounter versions of his parents, and then he understands himself better… What being is more chaotic than Loki? What do you have to learn from any version of yourself?”

15. Likewise, Tom Hiddleston addressed the nature of Loki and how the series’ logo fonts hold clues to what’s coming: “I want to preserve the freshness of the show for when it emerges, but something to think about is the [show’s] logo, which seems to refresh and restore. The font of how Loki is spelled out seems to keep changing shape. Loki is the quintessential shapeshifter. His mercurial nature is that you don’t know whether, across the MCU, he’s a hero or a villain or an anti-hero. You don’t know whether you can trust him. He literally and physically changes shape into an Asgardian guard, or into Captain America repeatedly. Thor talks about how he could change into a snake… I think that shapeshifting logo might give you an idea that Loki, the show, is about identity, and about integrating the disparate fragments of the many selves that he can be, and perhaps the many selves that we are. I thought it was very exciting because I’ve always found Loki a very complex construct. Who is this character who can wear so many masks, and changes shape, and seems to change his external feeling on a sixpence?” 16. If you hadn’t already noticed, as many of us have, Star Wars/Game of Thrones/Doctor Who actor Richard E. Grant does bear a certain resemblance to Mr. Hiddleston and since Grant’s role has yet to be divulged, theories abound that he may be playing another Loki Variant.

17. In fact, several actors’ roles have not been disclosed, including Sophia di Martino (Into the Badlands, Flowers) who, because of on-set photos and Marvel Comics’ apparent rush to print Loki: Mistress of Mischief, many speculate may be playing Lady Loki. In the comics, our favorite shape-shifting god took on the female form of Lady Sif, thus spawning another alias. 19. Marvel has indicated that unlike WandaVision and The Falcon and the Winter Soldier, Loki is intended to run for multiple seasons; at least three.

20. Expect cameos! As to which other Marvel characters might appear, Michael Waldron says the series had free reign: “If they were within the rights, and legal could clear it, there was no reason we couldn’t try and chase them down… expect the unexpected.” One seemingly high probability for fans — especially after it was revealed that Benedict Cumberbatch was meant to appear on WandaVision — is that Doctor Strange might appear in Loki, and likewise that some Variant of Loki will appear in the upcoming Doctor Strange and the Multiverse of Madness. At this point, I’d be more surprised by who doesn’t show up in that film.

BONUS: Loki seems to have manifested his own cereal! The Suicide Squad Finds Inspiration in Being a Freak

Get your freak on!