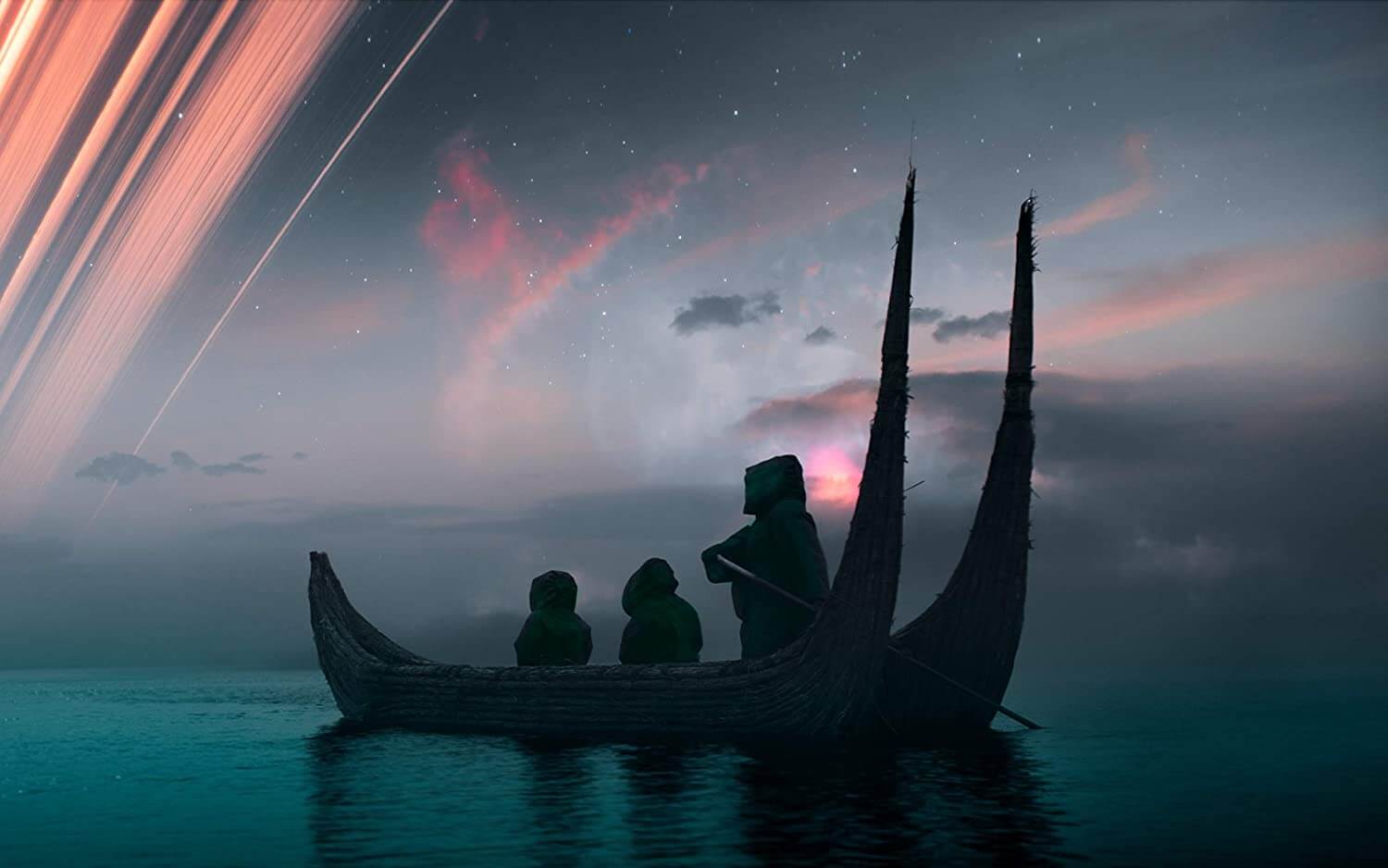 I haven’t read the books. Let’s start there.

Sometimes that’s a terrible thing, because you don’t fully grasp the intention of the material and the literary breadth of the original author’s intent. But for Foundation, now airing on Apple TV+, I suspect that’s actually going to turn out to be a good thing.

For subscribers, Apple TV+ has dropped the first two episodes of the 10-episode first season and I gobbled them up greedily. To qualify: I love science fiction, I consider myself a book person, though I somehow never read Isaac Asimov’s seminal contribution to the genre, and I actively want to be swept away. I can turn off my brain and allow a story to fully take me to a new place. I suspect people like me who are open to the experience and willing to let go will have more success with the series.

But I couldn’t really say why at first. Yes, I enjoy Lee Pace, and it was great to have him there to liven up the otherwise relatively inert empire. But somehow he wasn’t the main draw, despite his borderline offensive handsomeness, excellent acting and this majestic, blue armored dress thingie.

Yes, Jared Harris is always great, but his Hari Seldon wasn’t, somehow, the focal point of my attention.

I’ll say, for sure, that the seemingly bottomless production values absolutely blew my mind. The show is staggeringly beautiful. I’m a huge fan of The Expanse and the vistas and sets and CG of Foundation have the scope and depth and quality that a show like The Expanse could only dream of.

It’s true that, in some cases, some of the locations can feel derivative, but I’d argue that the places you might feel that they’re ripping off were probably written by people who were influenced by the original Foundation texts, so, there’s that.

In any case, if you have the right mindset, you won’t care that Terminus kinda/sorta resembles the barren desert of Tatooine and that certain elements of the design could be from Star Wars or Star Trek. It doesn’t matter. The show is so magnificent and beautiful that you can just exhale and drink it in. People younger than I am don’t have the grainy 80’s CGI pedigree and a childhood of watching remarkable (if jumpy by today’s standards) Ray Harryhausen effects to draw from, but we’re living in an entertainment dream world where anything is possible.

If you can dream it, Hollywood can make it.

Truly, that’s always been the rub for this particular work of fiction: they said it’s unshootable. Too cerebral. Not enough women. Not enough action. All ideas and no heart.

When I had finished the first two episodes, I jumped online to see if other publications shared my excitement, and hopefully to have them tell me what I loved so much about it, because it wasn’t instantly clear. Instead. I was shocked to see that the show hadn’t really landed with some folks. 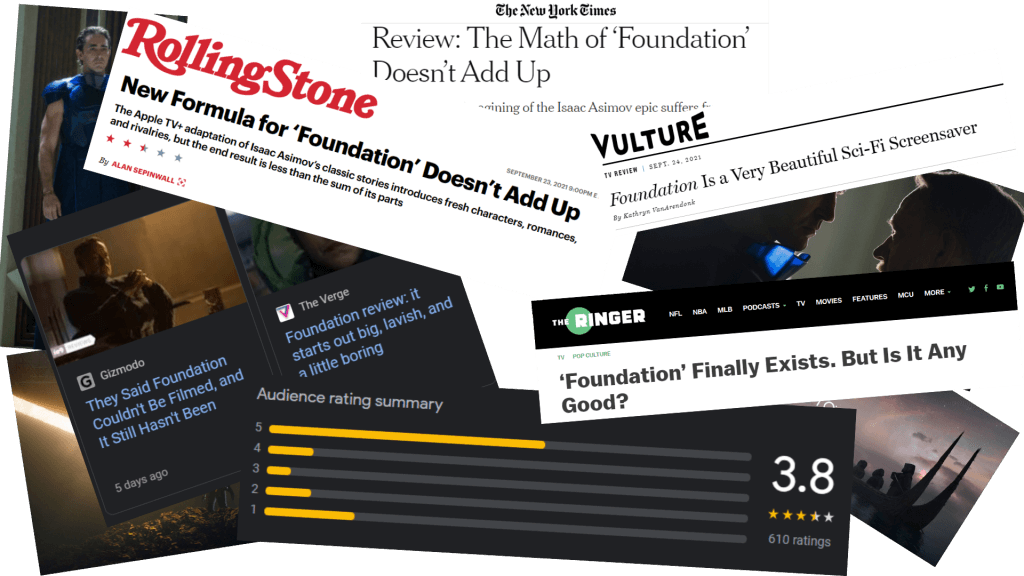 Reading through the various negative reviews was like accidentally stumbling into your opposing political party’s echo chamber. Very much “I do not belong here.”

One oft-trumpeted refrain was that the show is boring. Yep. I can certainly see that, especially in this MCU world where every second of screen time has to be chock full of hypermasculinity, bathos, binary characters and every-act-third-act-set-pieces. People are busy! They have school and work and playdates for their kids and y’know, collecting the various ephemera of a contemporary existence, and every minute of that precious time needs to be chock full of entertainment.

We listen to podcasts while we do dishes. We listen to audiobooks on our commute to work, (if only to distract us from the sheer number of Baby Boomer drivers that probably should think about hanging up their drivin’ spurs). We have low-impact, low commitment TV on while we do dishes or fold laundry. You know the type. Your Iron Chefs and Below Decks and your 11th full rewatch of Grey’s Anatomy or B99. Shows we don’t have to actually have to watch but nevertheless receive the comfort of familiarity from. Time is precious and it damn well better be filled with A+ content, and if Iron Man isn’t crackin’ jokes before he cracks heads then I don’t know what.

That’s not to say that these reviewers are wrong, necessarily, but they clearly hoped for something with more oomph. Something different than what Foundation delivered.

It’s fine! We’re all not going to agree on everything. Foundation is not likely to be “for” everyone.

It’s a slow burn. It’s cerebral. It’s gradual and also skips around the timeline with a disarming joyfulness, hoping against hope that you’ll seek to be invested enough to come along for the ride.

When I realized that other writers weren’t going to do my work for me, I watched the show again and figured out what drew me in. First of all, it was these two actors. And Lou Llobell as Gaal Dornick. 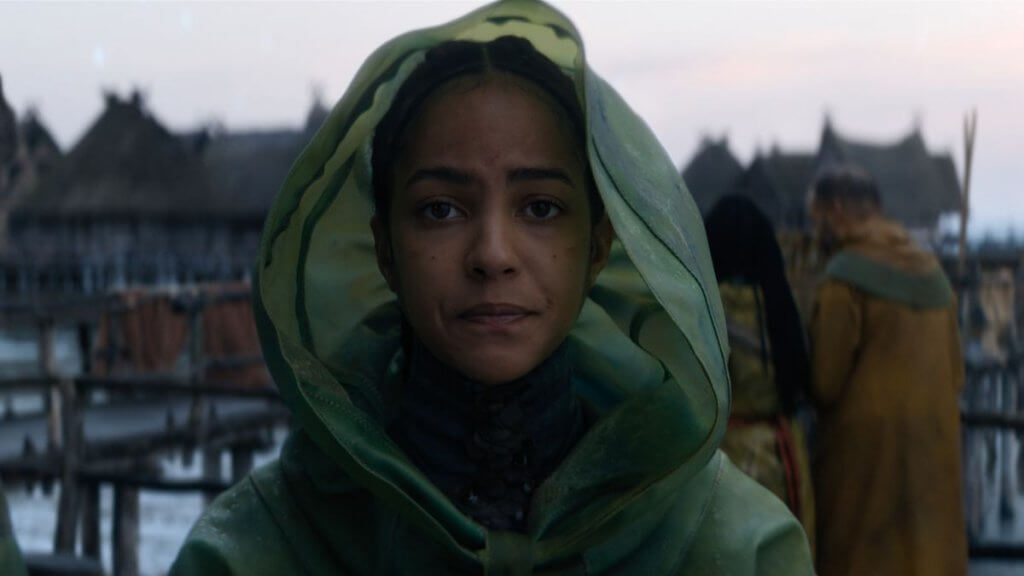 And in both cases, this is their first big gig as actors and the roles they inhabit were originally male in the Asimov text.

For Salvor, there was a certain veteran tone to her performance, a kind of badass sheriff vibe that I hope to see more of. For Gaal, though, I feel like her performance made me fall into an ocean. She’s one of those actors who has deep, soulful eyes and a face that can convey profound emotion with the smallest glances. I heard her voice over the top of the opening of the show, never having laid eyes on her, and by the four minute mark, I was already hooked. 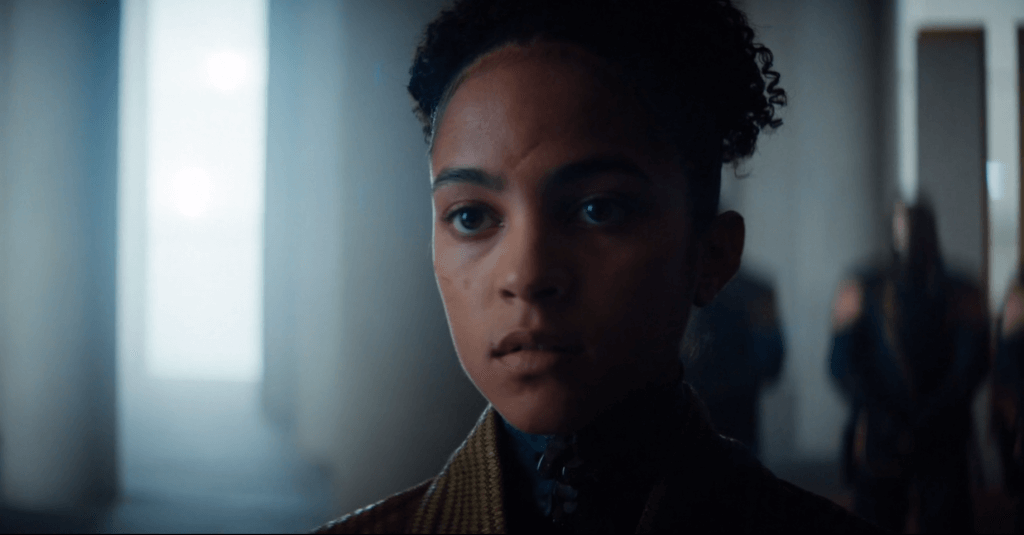 Your mileage may vary.

But what comes across in this iteration of Asimov’s epic is a true love of science fiction, and a team who intends to do right by the material. Thanks to the care and effort of writers David S. Goyer and Josh Friedman, I felt in good hands from the very first beat. The anthropomorphization of the concept of “Empire” into a single emperor who is re-cloned over and over again is a stroke of show-don’t-tell brilliance, and gives the viewer a human face — three human faces, actually — to direct their scorn at. 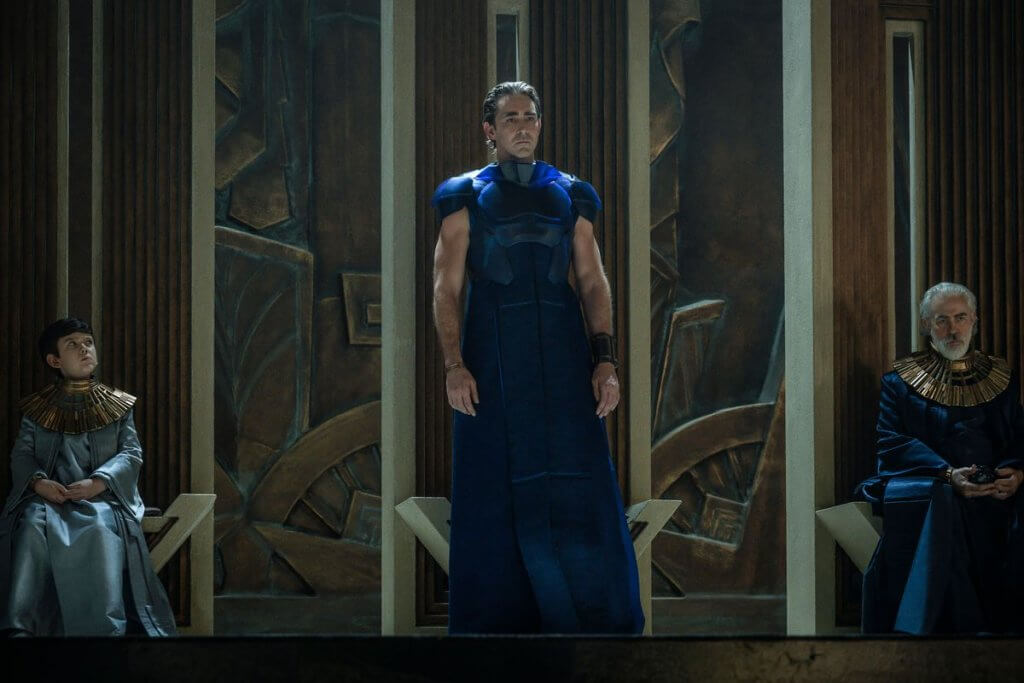 The clones exist in a trifecta of power. Dawn, the youngest clone (Cooper Carter), Day, the most virile and powerful of the clones, played by the smoldering hotness and sentient eyebrows that are Lee Pace, and Dusk, the oldest clone, played in a memorable performance by Terrance Mann. 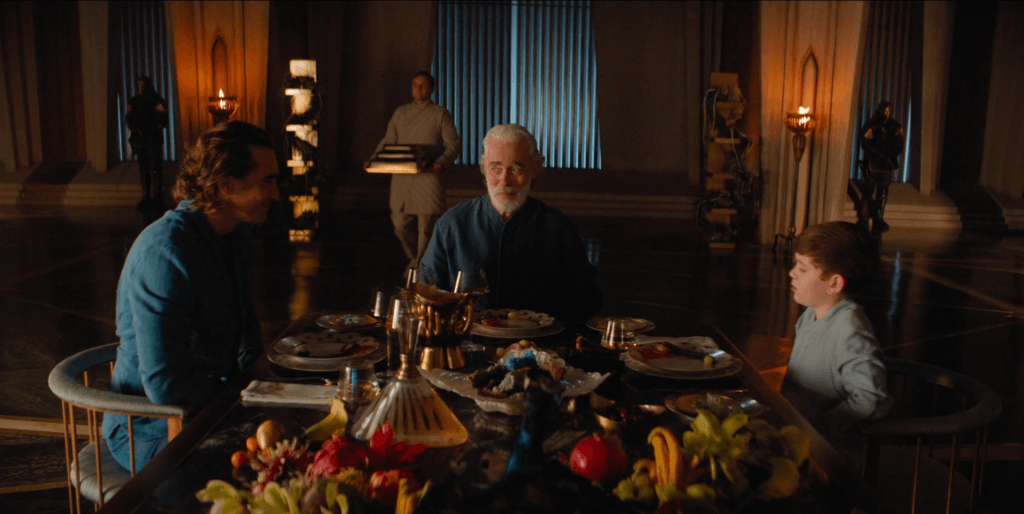 The story, in a nutshell, if a nutshell for a work of this magnitude is even possible, is that a mathematician and psychohistorian named Hari Seldon has read the various math tea leaves at his disposal and found that the empire, a 10,000 year old institution, is on the verge of collapse. Naturally, that message isn’t among the best news for the ruling dynasty.

Lou Llobell’s Gaal Dornick is a math wiz from a dying frontier world who predicted the rise of her planet’s oceans and is rewarded by the people of her planet with scorn and derision. They’re hicks, basically. Hard to trust anyone with book learnin’. She’s then pulled from the closing jaws of malignant stupidity and summoned to the core planet of Trantor, (which sounds like the name of an industrial supply warehouse to me, but whatever) to spot check Hari Seldon’s math.

As you can imagine, shit gets hairy on Trantor, as it is wont to do for visiting mathematicians who may or may not be seers of the future, and Gaal must navigate these new pitfalls.

In addition to the cast I’ve already mentioned, there was also a compelling performance by Laura Birn as Eto Demerzel, who plays the majordomo to the Empire and one of the last surviving androids. I’m all about her backstory. The lines she has in this show are positively bursting with hidden meaning. I can’t wait to see more of her. 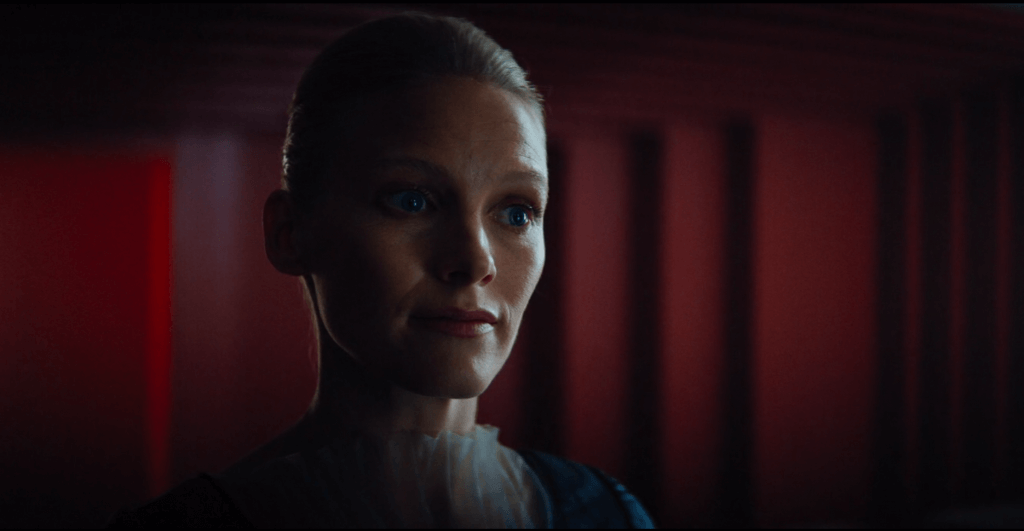 Wait, did I just say my favorite three characters were all women in a series that has been roundly panned for its lack of female characters? Could that be true?

It’s these types of choices that the braintrust behind Foundation makes: inspired, meaningful choices that come from a place of true adoration. If you’re anything like me, they’ll have you hooked on Foundation, too. Watch the first two episodes all the way to the end and if the last thing you see before they roll credits on episode two doesn’t pique your curiosity? Foundation may not be the show for you.

But if it does, if it is your kind of show, Foundation may have the sort of epic feel to it that we haven’t felt since – dare I even speak it aloud – the early days of Game of Thrones. It’s still too soon to say for sure, but I’m counting the minutes to episode three and if you are too, meet me back here and let’s figure out what’s going on together.