There’s a Sex and the City revival in the works, which means it’s time to examine my life.

The fantasy of writing as a profession was that I’d never have to actually talk to anyone or do anything other than write. I’d be alone with my thoughts. A Persian Carrie Bradshaw, sitting in front of my computer in a tulle skirt, typing away my trite observations as deep epiphanies. I couldn’t help but wonder, is love worth sharing your plate of soltani kabob with a side of Shirazi salad for the rest of your life? Then I’d go to brunch with my besties to discuss our aging vaginas very loudly in a packed diner. That was the dream.

I didn’t know that instead of a tulle skirt, I’d be in my PJs staring at a blank word doc, convincing myself that what I need is an “Amazon shopping break.” So I order a Bundt pan just to feel alive again and spend hours Googling recipes I have zero intention of ever attempting. Eventually, somewhere down the rabbit hole of monkey bread and impaling a chicken on the center “spoke” of the Bundt pan to roast, I realize I am wasting my life.

Like everyone else, I’m tired and behind on everything: my career, motherhood, The Crown, dental appointments. Everything.

Turns out, you do have to talk to people these days if you want to build a career. I was fully prepared to do that, learn TikTok, and SEO, and whatever else these very accomplished Generation Z kids are up to.

I even bought a Moleskin planner (one day literally says “make your peace with oatmeal”). My son would have gone to school, I would have reinvented myself, leaned in to whatever Sheryl Sandberg was talking about or shopped around for a new identity like Madonna does every decade.

None of this will happen. Not only do I not see or speak to anyone outside of playdates, but also who has time?

There are some things people don’t tell you about becoming a mother. Like that your nipples will be constantly on fire from breastfeeding, you’ll say things like “don’t put your penis in the freezer,” and you may or may not be trapped at home with said nipple ruiner and penis freezer during a raging pandemic for a whole year, which will make you question all of your life’s decisions as you try to staple a tri-corner hat made from construction paper.

And it always feels like you are the only one not living up to your potential.

I obsess over celebrity moms like Chrissy Teigen, America’s sweetheart and the epitome of the perfect mother, wife, and supermodel who cooks and eats as if she’s immune to calories. Meanwhile I haven’t enjoyed a brownie in 10 years without washing it down with a cup of crushing guilt and self-loathing. Now I’m supposed to aspire to running a business AND cooking lasagna in a sexy robe while my Grammy Award-winning husband dotes on me? Not gonna happen. 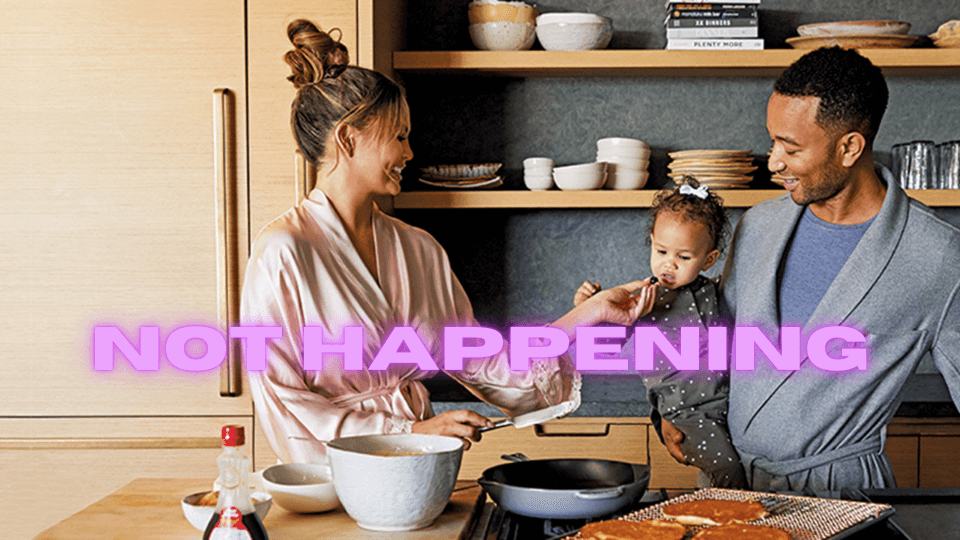 But the worst are the sort of average but famous non-TV celebrity mom influencers who make rainbow waffles for the whole family or run a whole-damn-day daycare, dedicating their lives to their kids. At least with the celebrities you KNOW they have help. Jessica Alba did not just abandon her kids at a fire station so she can go on a vegan hike retreat and Hilaria did not get that body back after five kids (and a mysterious sixth) by using a lavender ointment cream she helped produce. Unless that lavender cream has supernatural powers to undo the damage of these chips I ate, for sure she has help with her village of kids while she does her yoga.

I don’t begrudge anyone with money. If I had that Alec Baldwin cash I’d hire someone for every chore in the house, especially this past year.

On top of already being behind, women are encouraged to practice self-care as if we need another errand. You want me to care for everyone else and myself? That should be someone else’s job. The most self-care I’ll do is watch Runaway Bride while I fold laundry and wonder if Julia Roberts was always this annoying and if Richard Gere knows anything about women. You want a guy to wake you up at dawn, just bursting to talk to you, can’t wait another minute just to find out what you’ll say. No, sir, I do not. If you wake me up at dawn it better be because the house is on fire and we need to evacuate immediately. Honestly, most days I wake up already angry thinking I can’t believe I have to do this shit all over again. But being the optimist I am, I also think, Who knows, maybe we’ll get hit by an asteroid and it’ll all be over.

But after 12 cups of coffee, I perk up and eavesdrop on my son’s Zoom assembly where the principal is teaching a bunch of jittery, uninterested 6-year-olds how to meditate, breathe, and practice gratitude (that’s LA public schools for you). And I really, truly do feel grateful for what I have and the fact that I can come here and complain about celebrity moms. If I just set realistic expectations, I can – at best – be a less sexy version of Carrie Bradshaw and embrace what I do have instead of obsessing over what I don’t.

I couldn’t help but wonder, is the hole in the Bundt pan a representation of the gaping hole in my life that needs to be nurtured by an Italian bundtwich? Think Pieces
In this article: