Episode two of Loki begins with such a small, yet profound, moment that I’m sure I’m reading into it way too much.

The episode opens at a Wisconsin Renaissance fair in the year 1985 (naturally). Troops from the Time Variance Authority (TVA) teleport into the fair, and a nameless woman yells at them for being out of costume.

“Some of us need this, you know,” she continues, her voice withering with a sense of insecurity. 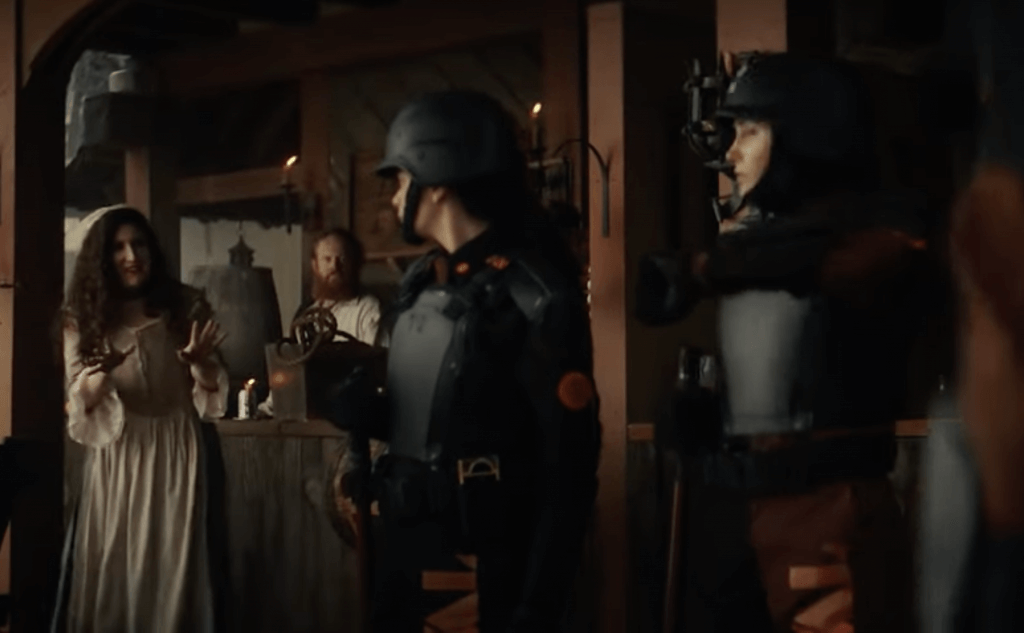 As I said, this is a small moment. A brief joke with no consequences. But it really touches on a major aspect of human nature and the appeal of time-travel fiction.

Perhaps more than anything, you are trapped in the present. This is unfortunate because that also happens to be where all of your shit is located. Everything you have to deal with is here with you now. So it’s reasonable to desire, at least for an afternoon, to escape from your day-to-day everything and go put on a bodice and joust or whatever.

If you really consider it, this perception of time is a coping mechanism on its own. People have to compartmentalize time into these little windows because otherwise the sheer weight and complexity of existence would break your sanity. The best example of this is how everybody acted like 2020 coming to an end would have some definitive effect on all the horribleness that’s come to define it.

So here we have this brief scene with a Wisconsin woman in 1985 (a decade nestled in its own nostalgia), who more than anything needs to pretend she is in a sanitized version of the 15th and 16th centuries. And who watching this show can’t relate? Because as Loki demonstrates, time can be a great place to escape.

After arriving at the Renaissance fair, the TVA agents are quickly felled by the mysterious variant revealed to be an alternate version of the Loki we know and love. For the sake of clarity, we’ll refer to this antagonist as simply the Variant. Aliases aside, the Variant takes a TVA agent hostage before jumping through time. Back at TVA headquarters, we find Loki watching training videos on TVA protocols. Providing the voice of the animated (and apparently sentient) cartoon clock is voice acting legend Tara Strong. She did the voice of Batgirl. She was Bubbles on The Powerpuff Girls. She was Timmy Turner on The Fairly OddParents. Ben 10? She’s Ben 10. Batman video games? She’s Harley Quinn. Such range. Incredible.

Speaking of variants, we are treated to a brief presentation from Agent Mobius showing all the other versions of Loki that the TVA have apprehended in the… past, I guess? The alternative Lokis include Sporty Loki, Hulk Loki, what appears to be Ben Kingsley Loki, and your traditional Norse Loki. That’s fun. TVA sends a search party to track down the rogue Variant (not Rogue from the X-Men). Because character motivation is vital, Loki cooperates with the TVA in hopes of gaining an audience with the all-powerful Time-Keepers. Another good thing about working for the TVA, other than the access to near-godlike abilities, are the sweet windbreakers. 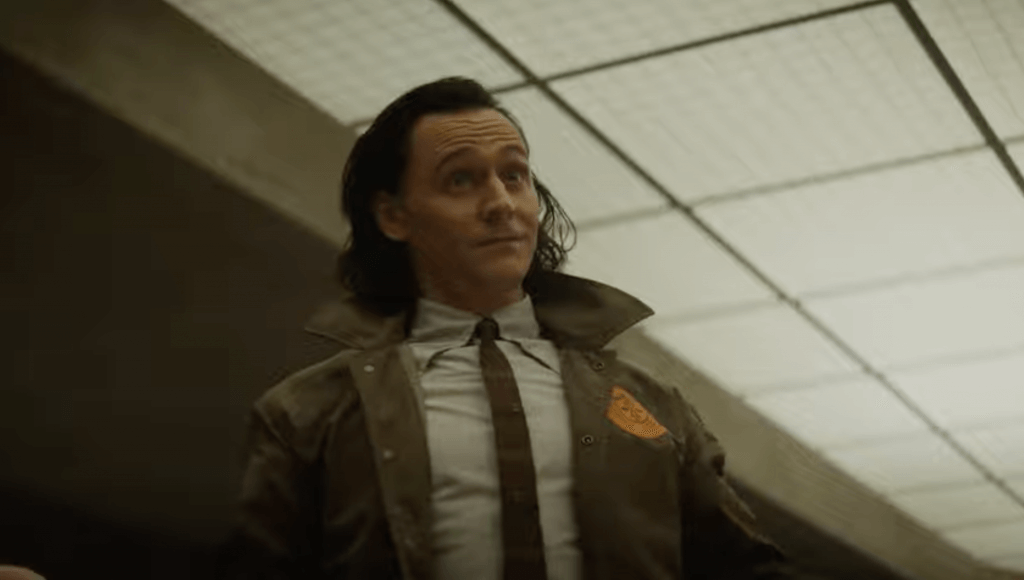 One of the best aspects of this series so far has been the interplay between Mobius and Loki. Loki continues his attempts to manipulate Mobius, who always remains a few steps ahead. Yet, despite being at a disadvantage, you never underestimate Loki’s capabilities. It’s a very narrow lane, but the show manages to remain between the lines.

While researching case files on the Variant’s previous exploits, Loki attempts to do some digging on the TVA. He is denied access to files detailing the TVA’s origin, the beginning of time, and the end of time. Those, of course, are classified.

What Loki does access is his own personal dossier. It’s from this file that he reads about the destruction of Asgard. This leads to the realization that the Variant is hiding inside of apocalypses (not Apocalypse from the X-Men). As far as hiding places go, this is definitely the coolest.

As Loki explains, the Variant is able to hide its actions from the TVA because whatever its actions, everything in that timeline is quickly wiped out by Armageddon. To test this theory, Loki and Mobius head to Pompeii, a place famous for ceasing to be. 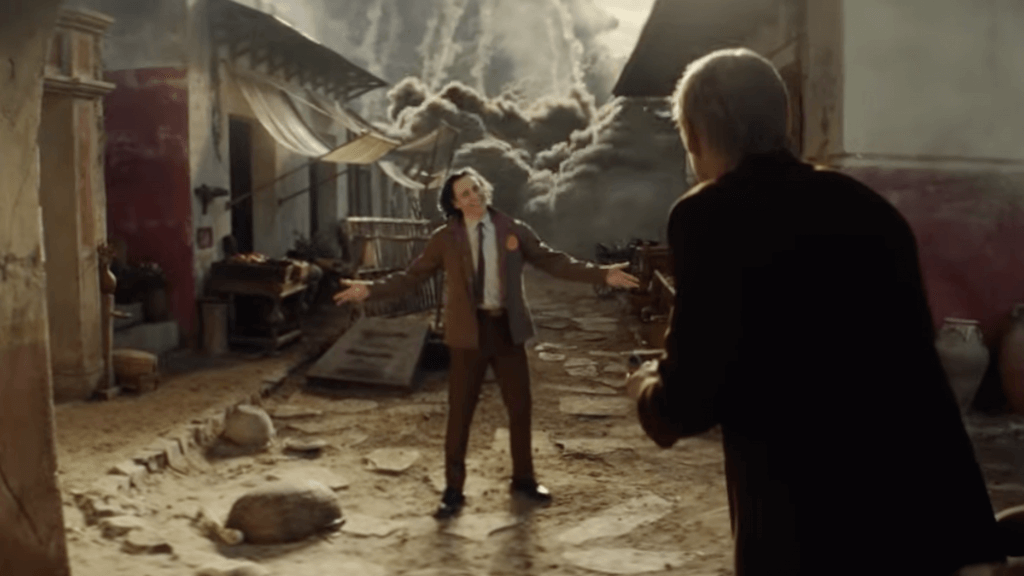 Loki erupts into a boisterous speech in Latin, informing the people of Pompeii of their imminent deaths by volcano. At any other time or place, his actions would cause a noticeable disruption in the timestream. But, proving Loki’s theory, the extinction level event set to occur hides Loki’s shenanigans from the TVA. Mainly because no one from that timeline continues to exist or have any further effect on reality.

While doing some research into doomsdays (not Doomsday from Superman), we learn that Mobius is a big fan of jet skis. He keeps a jet ski magazine on his desk as a reminder of the good in the universe which he serves to protect.

After a lengthy but interesting philosophical discussion with Loki, Mobius recalls an item that the Variant left behind over the course of its time hopping—an anachronistic candy box. We then learn that this treat was only sold on Earth from 2047-2051. Cross-referencing the candy with previously recorded disasters, Loki finds a connection to a catastrophic incident in Alabama, 2050.

Arriving at the corporately owned community of Haven Hills, we find residents attempting to ride out a violent hurricane. They are doing so in a sprawling superstore where the Variant is believed to be hiding.

It’s at this point that we learn that the Variant can transfer its consciousness into other people and control their bodies. The Variant transfers control from person to person while Loki attempts to gain its trust.

Meanwhile, Mobius locates the kidnapped TVA agent, who appears to have had her grip on reality loosened by the Variant. The agent reveals that she disclosed the location of the Time-Keepers to the Variant.

The final beats of the episode give us the big reveal of the Variant. We’ve got Lady Loki, everybody! Fantastic. Lady Loki springs her masterplan. The timeline-manipulating bombs that Lady Loki has been stealing activate all around the superstore before teleporting to various points across the Sacred Timeline. Panic sets in at TVA headquarters as agents try to assess the damage.

Lady Loki opens up another time portal and escapes. Our Loki follows behind her as Mobius screams out, demanding he remain put. Where, or should I say when, are we headed next?

One important thing about this show is that despite all the talk of massive catastrophes and world-ending events, it never becomes dismal or mired in misery. It simply acknowledges the truth: Tragedy is real and often something we are powerless to prevent. The best and most admirable thing we can do is move forward—with jet skis in mind—and try to do better than we did the day before. At the very least, we have time.

But don’t take it from me. Here’s Jack Kirby, the co-creator of Marvel’s biggest characters, describing what his heroes mean to humanity.

The Suicide Squad Finds Inspiration in Being a Freak

Get your freak on!

The best kind of female representation.