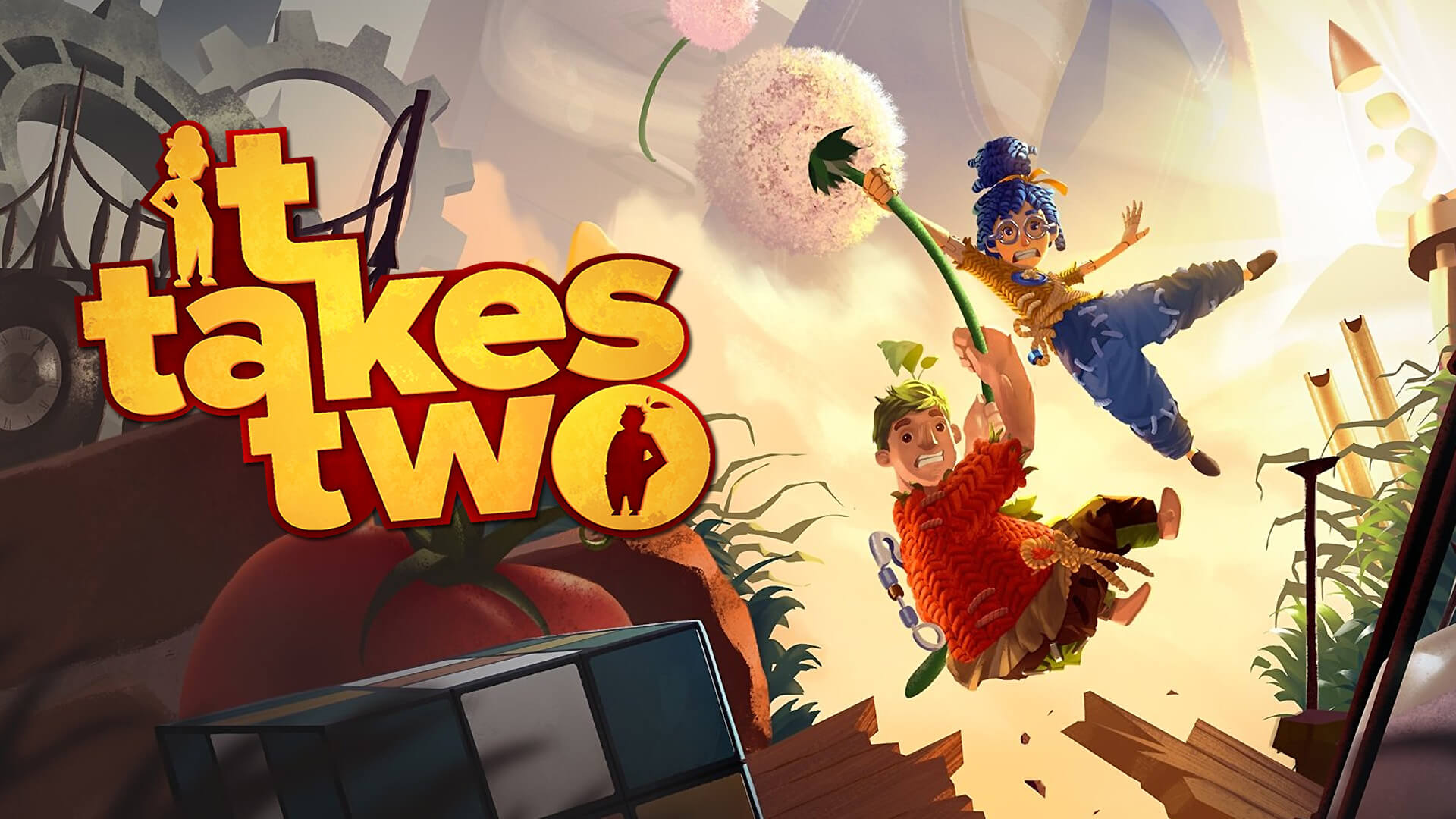 Up until recently, my go-to recommendation for friends that ask about good modern local co-op games has been Overcooked 2. A cartoony and charming package that masks a brutal simulation of the extreme pressures of a professional kitchen, that Team17 title is one that forces players to communicate at lightning speed and cooperate seamlessly. It’s an experience of stress and sweat. To play Overcooked 2 (and the same goes for the game that preceded it) with a partner is to test the bonds of love and patience that bind a relationship. Tenuous couples need not apply, for they will surely be rent asunder by desperate cries of “Cheese! Cheese! Chop the bloody cheese for god’s sake!”

Nevertheless, despite the stress, there’s a state of divine sort of cooperative Zen that can be achieved in the Overcooked games. It’s not long-lasting, and you have to crawl through broken glass to get it, but occasionally–when two players manage to find the right balance, the right work pattern, or in short: When they get into the zone and the operation of the kitchen flows like water–the feeling of cooperative glory is potent indeed. In It Takes Two, an action-adventure game developed by Hazelight Studios, the developers’ aim is to take that feeling of cooperative glory and stretch it out over an entire game. It isn’t perfect, and it doesn’t reach the ecstatic heights that Overcooked can do at its best moments, but it succeeds far more often than not, and it has now become my go-to title whenever I’m asked about games that are fun to play with a friend or, in particular, a partner (the game can be played both online or in person).

Unlike Overcooked, a game in which the story is absolutely minimal, in It Takes Two the narrative is all-important. It’s what drives the action and gives it its thematic heft. The three main characters in the game are a late-thirty/early-forty-something married couple, May and Cody, and their young daughter, Rose. May and Cody’s marriage is on the rocks. As the game opens, they are mid-argument. It’s not long before they tell Rose the bad news: They are planning on divorcing. As often happens with children, Rose blames herself for her parents’ strife. Sneaking away to her room and clutching the two small dolls she had made of her parents out of wood and yarn, she cries as she wishes out loud for them to rescue their love for each other. Naturally, in classic children’s story fashion, the tears fall in slow motion and ominous music plays, and before you know it May and Cody are waking up as the doll versions of themselves. That is where you and a partner come in. I say the word partner again because that’s who I played the game with, and I wholeheartedly recommend the experience. There’s a certain magic and thematic resonance to experiencing It Takes Two with your “other half.” The game is never overly difficult. In fact, parts of it can probably be fairly described as “a little bit too easy.” But it’s consistently fun throughout, with the designers taking a page out of Nintendo’s playbook and introducing new gameplay elements just as the last batch threaten to become stale. As you embark on the odyssey through May and Cody’s garden and house, you will find the two characters equipped with a number of tools, weapons, and powers. The key thing about the mechanics of each, and about the level design that surrounds you, is that in order to succeed you need to work together. One of the earliest abilities you unlock is a throwing nail and swinging string combo. Cody can launch the nail into surfaces, and May can use the string to swing from the newly attached nail. Learning how the game wants you to use the items in conjunction with each other is what gives things its spark. There’s a satisfying balance to the way the game allocates the tools and abilities too. Sometimes May gets the more offensive weaponry, other times it’s Cody. Seeing which new abilities you will unlock in each new level of It Takes Two is a real pleasure, and the vast majority of them are clever and fun and satisfying to use. Cody, carrying a device that squirts sticky beeswax, and May, with a gun that shoots fired up matchsticks that cause Cody’s sticky goo to explode.

Even better is the way the dual use of the game’s various abilities makes you feel empowered as, well, a couple. Learning to use these, first each individually and then–crucially–together, for greater effect, is the game’s greatest treat. It’s also how the game communicates its themes. A relationship ruptured. How might it be fixed? By cooperation and communication of course! Just as you and your game partner have to talk and experiment and trust each other in order to progress, so do May and Cody. It’s a nifty play by the developers, and it works very well. It certainly has more mileage than the game’s script, which doesn’t quite measure up to the wonderful art style and design or the aforementioned gameplay. The actors do their best with it, but there’s an unfortunate preponderance of cliché characterisation and jokes that you have heard a thousand times before. Subtlety, too, isn’t exactly the game’s forte. There are moments of what feel like potential breakthroughs of real quality, but they’re few and far between.

Something must also be said about the somewhat dodgy thesis that (possibly, depending on how you read the ending) lies at the game’s heart. It Takes Two posits that a finished relationship isn’t ever actually finished, merely broken, and that with enough willpower and teamwork it can be patched up and fixed. I’ll be charitable here and say that the game’s ending can be read in one of two ways–but this conclusion (and it’s surely no spoiler, all things considered) is the one that is hinted at more strongly, and it feels reductive and damaging in the way it perpetuates the idea that relationships, and marriages specifically, can always be fixed, if only the people involved remember their good times and realise why they fell for each other in the first place. Sometimes they can’t. Sometimes, in fact, they’re fixed by being broken up. It’s simply a fact that most relationships have to end. There’s wisdom and maturity in recognising that toiling forever in misery is not a healthy road to go down, especially when there might be a child involved.

This is all just a minor stain on It Takes Two’s record, however, as by and large Hazelight Studios have created what I consider one of my most memorable recent gaming experiences. The game is about twenty hours or so of immensely fun, varied gameplay and inventive, gorgeous visuals. The levels that you proceed through aren’t gigantic, but they are excellently designed, with enough nooks and crannies and alternative routes built in to allow for a sense of exploration and wonder aptly suited to May and Cody’s newly shrunken perspective in this half-familiar, half-magical world. There are a healthy number of entirely optional minigames like tug-of-war and ice racing scattered throughout the game that you can partake in that are pretty much all fun too. Special mention must go to the game’s snow level, in which you find yourself in a snowglobe that contains the winter village where the couple spent an early holiday together. One of the more expansive levels in It Takes Two, it’s a genuine wonder to behold. As my partner and I made our way through this world, I kept getting sidetracked and distracted by a picturesque bit of scenery here or a teasing promise of some throwaway mechanic there. Wandering off with a glint in my eye every few minutes, she would indulge me patiently yet teasingly.

This was our dynamic throughout the game, yet it was here in the snow village that my methods were vindicated. In most other levels, my diversions usually led to maybe a curious sight or an interesting bit of level design. But not here. Here I found a pile of snowballs that looked distinctly like they could be interacted with. I approached it tentatively on my ice skates and my eyes lit up when the prompt to interact appeared once I got close. Suddenly an ammo counter appeared on my screen. Five snowballs! Turning around and facing my approaching partner, I instantly took aim and fired without a second thought. Pow! Direct hit. My partner sat bolt upright, whipped her head to look at me, narrowed her eyes, and we spent the next ten or fifteen minutes completely ignoring the game’s main quest by zooming around on ice skates trying to destroy each other with snowballs. That episode served as a testament to the real magic of It Takes Two: Good local co-op games sometimes feel like an endangered species these days, yet here is one that hearkens back to the golden era of previous console generations, and that taps into the mischief and the electricity that arises when two players sit next to each other on the sofa, both clutching a controller.