When one watches Birdgirl one might not think of a character study on what is essentially a silly animated show character. However, I have fifteen hundred words to write and so we’re going on a deep dive here about Judy Ken Sebben, aka, Birdgirl.

I was a huge fan of Harvey Birdman, Attorney at Law back when it was on the air in the early- to mid-2000s. So I was excited to hear about a spinoff that brought back the original creators Michael Ouweleen and Erik Richter. The show was developed by Erik Richter and Christina Miller.

First of all, the intro song slaps. There’s an underlying “ohmygodohmygodohmygodohmygod” which fits perfectly with the Birdgirl character as she’s frantic and constantly goes a hundred miles an hour. At the same time, she’s unsure of herself as her alter ego, Judy.

Birdgirl is about, well, it’s about Birdgirl, aka Judy Ken Sebben (Paget Brewster), a haphazard superhero who finds herself splitting her time between saving the city by night and being a corporate lawyer by day.

We start with Birdgirl lamenting the fact she has “volunteer work” to do instead of going out for drinks with her coworkers. That’s not to say she doesn’t enjoy being a superhero. She says she often sits in the office watching the time tick away until she can throw on her suit and go bust some ass. After all, she’s got a city to save.

A city that’s apparently under constant assault. Birdgirl kicks ass no less than nine times and yet no one comments on the scourge of rampaging criminals. I didn’t even see any cops in the whole show so one can only assume that every cop in the city is busy busting crooks. In short, the city is stupid with crime. But that’s OK because Birdgirl’s a legit superhero. 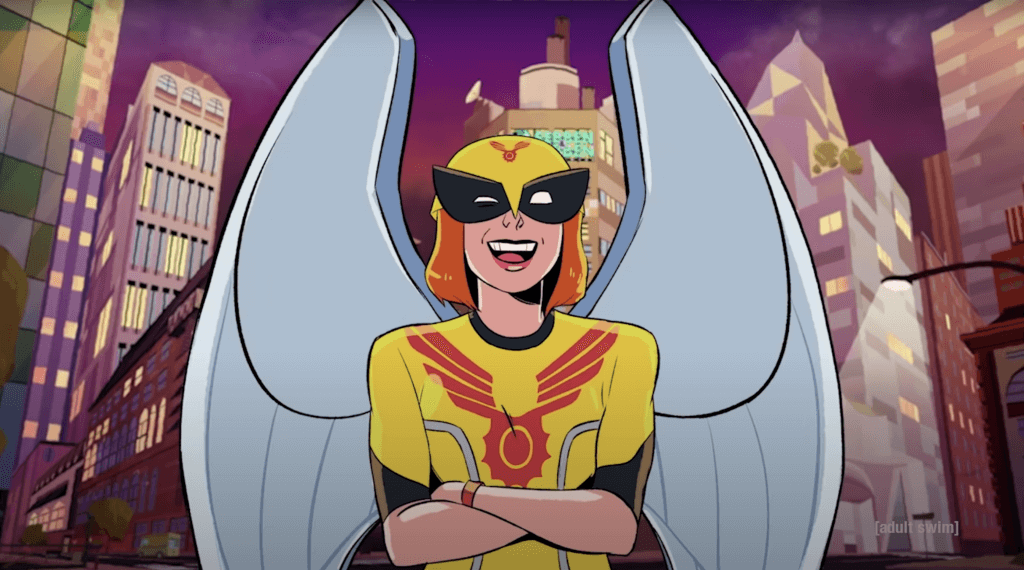 In typical storytelling, the hero is selfless and courageous. Running into danger without giving it a second thought. In fact, Birdgirl doesn’t give many things a second thought, often crashing through windows and busting down doors for no other reason than she can. In the opening few minutes she thwarts a mugging, saves a cat from a burning building, and stops a kidnapping before it becomes a murder. Not bad for fifteen seconds of screen time.

However, Birdgirl leaves a mass of destruction in her wake. For instance…

She causes a desk to fall on the mugger, narrowly missing and potentially killing the victim. The fact she stopped the mugging was purely accidental. Sure, she saves the cat from a burning building but she does so by blowing up a massive water tank to put the fire out. And she distracts the would-be kidnapper which ends in what appears to be a head-on collision. She’s a mess but she’s confident and despite her anti-Midas touch, she’s competent also.

She’s less confident or competent as Judy Ken Sebben, daughter of Phil Ken Sebben, CEO of Sebben & Sebben, a conglomerate that “makes all the things no one else will”. You see, as Judy, her father never paid her any attention. And she craved it. She longed for it. She was desperate to capture her father’s attention and so she started doing crazy things as Birdgirl. And her dad loved it. Birdgirl got the attention and love that Judy so deeply desired. So Judy dove headfirst into Birdgirl, losing her own identity in the process. She was less and less Judy and more and more Birdgirl.

This is probably why when her father dies, he leaves the company to his most favorite person in the world, the one who most embodies who Phil Ken Sebben was… his daughter, Judy Ken Sebben.

No, I’m sorry, he leaves the company to Birdgirl. The morning before learning of her father’s death, Judy tries to pick the right outfit that says “confident and decisive.” The options for the right color of outfit runs the gamut from harbor gray to slate gray to campfire smoke to thunder sky. So, you know… gray. Her entire life is shades of gray, whereas Birdgirl is black and white. Good and evil. Cause and effect. This kind of attitude is what endeared Birdgirl to Phil Ken Sebben in the first place.

Let’s dig in deeper here because this is fucked up. Imagine the body blow it must have been to learn that your father had zero trust in you as a person and instead thought the idea of a bird-brained (sorry) superhero would be the better fit for his multi-billion dollar company. Why? In the words of Birdgirl, Judy doesn’t have a “big, swinging dick.” And let’s face it, Birdgirl definitely has big dick energy.

Unfortunately, putting Birdgirl in charge of the company was a colossally bad idea. Her destructive presence causes the stock to plummet, putting everyone’s jobs at risk. So, why doesn’t Judy just run the company behind the scenes? She can’t. She can’t get rid of her Birdgirl persona. It’s like when Daniel Day-Lewis has to go to therapy after making a movie because he has become the character. In my professional opinion (not a professional), Judy has dissociative identity disorder stemming from the childhood trauma of her father not hugging her enough (or at all) and is going to need years of therapeutic intervention in order to become her true self again.

Dissociative identity disorder (DID) or split personality disorder, is a mental disorder “where a person has two or more distinct personalities. The thoughts, actions, and behaviors of each personality may be completely different.” If that doesn’t describe Birdgirl, I’ll eat my hat. (I won’t.)

To further bolster this argument, Judy’s best friend, Meredith the Mind Taker, (Negin Farsad) is able to tap into Birdgirl’s mind and turn a dial so that she can speak to Judy in those moments where Birdgirl is, you know, running around breaking shit. It’s a literal, visual representation of Judy’s two clear-cut personalities. This shift between personalities is usually caused by a stressor or a trigger. Like, say, your father refusing to acknowledge or dare I say (I dare) love her in any real, fatherly way. A person with DID may harm themselves or put themselves in harm’s way. Sort of like putting your life on the line daily by being a superhero. At times, it seems like Judy is unable to turn Birdgirl off once she’s in the throes of it. Probably because it’s easier to distract herself with work than to acknowledge the fact that her father saw Birdgirl as executive material but not his own daughter. After all, at the end of the day, it isn’t Birdgirl who lays down in bed feeling the weight of paternal expectations, it’s Judy.

People who fall into the category of Chaotic Good are often described as acting as their conscience directs them with little regard for what others expect. They believe in goodness and right but have little use for laws and regulations. They follow their own moral compass, which may not agree with that of society. Good heart, free spirit but can disrupt the order of society.

This is Birdgirl to a T. She’ll catch the criminal all right but at the cost of millions of dollars worth of damage to the city. And she doesn’t much care. Or at the very least, it doesn’t much bother her. Judy and Birdgirl are both deeply flawed individuals who struggle to find their way in the world. But their journey is just beginning.

Since Bird-Judy is a literal hero, it might seem logical that the journey she takes is that of the hero’s journey. I’d argue it’s more about initiation. Initiation is commonly described as making the transition from adolescence into adulthood. The adolescent comes into their maturity with new awareness and problems along with new hope for the community.

For Bird-Judy, this comes after she greenlights a terrible project. A toilet that turns your feces into compostable discs that get sent back to the farm to be used as fertilizer. Alas, the vegetables grown from it literally taste like shit. That’s not the problem, however. The problem comes when the toilet gets a taste for human flesh and goes on a rampage throughout the city. Judy realizes SHE would never greenlight such a terrible project and further realizes Birdgirl is an awful CEO. So, “Birdgirl” announces that “Judy” is taking over as CEO. Judy has come to accept her responsibilities and is ready to move forward into that new adventure.

And you can bet there will be plenty of adventures to come. At the end of the pilot, a team has been formed. A “Birdteam” as it’s been dubbed, made up of Judy and several of her coworkers we meet along the way. Can the rebellious hero tame her ways and bear the weight of two incredibly daunting responsibilities? Or will she fail spectacularly on both fronts? I’ll be tuning in to find out. 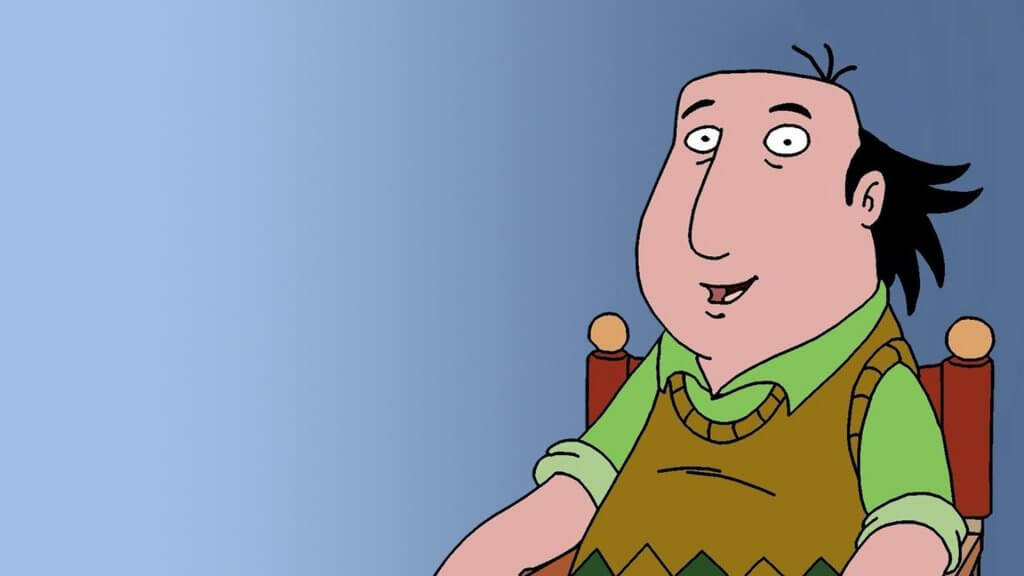