If you haven’t yet watched Ted Lasso on Apple TV+, I would encourage you to do so and tell you I’m insanely jealous you get to experience it for the first time. It’s tremendous. It’s smart and funny and heart-warming, and that last one is usually not something I look for in a show. Ted Lasso is so good that I don’t still like it in spite of its ability to warm organs but because of it. It makes me feel actual joy and hopefulness to such a degree that not even my cynicism can compete, and my cynicism is pretty tough. Which is why this tweet/interview thrilled me to my very (usually frozen) core.

🎵Can you tell @BrettGoldstein how to get, how to get to Sesame Street? 🎵Because he’s got an idea for a 10-season crossover arc between the casts of @SesameStreet and @TedLasso—just watch! #FromADistance pic.twitter.com/3baKNiAOGk

First off, this is more Ted Lasso content which is a thing you need when you’ve lost count of how many times you’ve watched the show all the way through. (Seriously, if anyone can point me to a Ted Lasso trivia contest, I’d be forever grateful. There has to be some use for all of the facts I have floating around my brain, taking up space where important things like “my best friend’s birthday” should live.) The second reason? 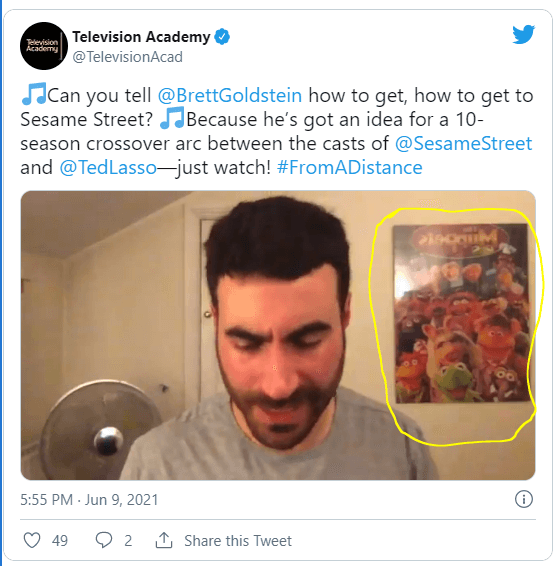 Now technically, I know this actually means that Brett Goldstein, the Ted Lasso writer/actor who plays Roy Kent, loves The Muppets. And further technically, I know that his answer about which show he’d like to do a crossover with was Sesame Street, but that has to only be because The Muppets aren’t currently on the air. Roy Kent loves The Muppets, and so do I. The Muppets are also a heartwarming, smart, funny entertainment property that I love enthusiastically and with my whole being. I’ve seen everything, I regularly listen to the soundtrack, and I cry every time I hear the “Rainbow Connection.” Meaning my sentiments on the topic are identical to Roy Kent’s.

This also means that I decided the answer on the crossover couldn’t stand as Sesame Street even if it’s a lovely show with some muppets. It has to be the cast of Ted Lasso and The Muppets. Think about how great they’d be together. They’d help each other grow and become better people or maybe just have the chillest hang, and I want to imagine it’d be awesome.  It has to be because: I know I might have misled you with the header, and I apologize. It’s not that I don’t think Kermit and Ted, the two mild-mannered, unassuming leaders of each group, wouldn’t get along; I just think they’re better used elsewhere. Ted is the guy who’s always trying to make the people around him better, but who coaches the coach? (The answer is Coach Beard, but that’s sort of beside the point.) Ted does for everyone around him so often that I feel like the guy just needs a chance to cut loose. Enter completely cool but also entirely self-situated Scooter. These two could just *be*, you know? Imagine them very causally splitting a joint and then talking about their shared love of Joni Mitchell. Are you really happy now? Me too. I don’t know how to explain that I know that Coach Beard would have the hots for Miss Piggy, I just do. Beard doesn’t believe relationships should last longer than it takes to cook a steak, and Piggy would absolutely ruin him. Piggy, used to being the pursuer and not the pursued, would be cautious at first, but Beard would easily be able to woo her away from that skinny little frog. Beard would get what kind of woman she is, and Piggy would love him for seeing her. I expect to be invited to the wedding. Rebecca has had such a hard year, worked so much on herself, and seemed to have fully returned to form but now she has half of Rupert’s money. She deserves to have Janice offer her some acid and then act as her drug sherpa. They deserve to plan a trip to the New Mexico desert together. They deserve to get whatever they want.

Keeley and Dr. Teeth and the Electric Mayhem Minus Janice I’m sorry, Janice. There will come a time when you, Rebecca, Keeley, and Sassy all go to Vegas for a girls’ trip and I will write fanfic about it, but right now you get to hang out with Rebecca and Keeley gets to fill in for you in your band. Fun fact, Keeley had never picked up a bass before tonight, and she now has a recoding contract. Because she’s magic, and exactly what the band needs to rediscover their sound. Listen, I really wanted to make it a Nate the Great meets Gonzo the Great thing, but that’s not the answer. The answer is that the weirdo, “sort of like a turkey” entertainer has a lot to teach Roy. In the same way Ted taught Roy that he can be a kind, protective teammate and still be tough, Gonzo can teach Roy that he can be gruff and angry sometimes and be silly and wacky at others. It’ll help Roy loosen the grip that traditional masculinity has on him. Also Gonzo would have a lot to say about Roy’s transitioning out of football. Who better to give the former star tips on staying hopeful and continuing to dream even after you’ve seemingly been cast of out the place you felt most alive – dammit, I made myself cry. I thought about it too long, and now I’m picturing Roy opening up about being afraid of moving on and Gonzo telling him he has to keep believing and then everything from Ted and Gonzo clicks into place for him and I’m crying. Jesus. So here’s the thing: I don’t think Jamie’s ever had friends. I think he’s had teammates and lackeys and he’s had girlfriends who he trusts enough to be emotional around, but I don’t think he’s actually had an equal, close relationship with a non-romantic partner before. Which is why when he tries to tell Rowlf and Fozzie that they should go mess with Nate, they’ll look puzzled at him and then ask why they’d do that. After he’d have to explain “You know, because it’s funny to laugh at other people’s pain,” they’d gently tell him that’s not how they do things and then introduce him to the wild world of “being a good friend.” They’re cool enough that they wouldn’t care how uncool they are, and that’s exactly what Jamie needs. Nate Shelley has a dangerous side. I want to see it. Likewise, I’ve seen Higgins’ Van Dyke. I want to see these two get down. Simply unmatched in terms of unadulterated enthusiasm and physical prowess. There isn’t a doggo in the neighborhood who is safe from their belly rubs and ear scratches. Your beer pong game is about to get destroyed, and it’s going to be a joy to watch.

Baz and Paul and Jeremy and Statler and Waldorf Sams: Obisanya and the Eagle First, there’s literally nothing I want more in this world than good things for Sam Obisanya. Nothing. Look at him. He’s the most pure thing in the universe, and I just want him to be happy and light. You know who needs a little lightness and happiness? Sourpuss over here. It’s not just that I finally got my naming convention down (although *fist pump* gif on that one), it’s also that Sam can teach Sam the value of being a goldfish. Sam the Eagle majorly needs to forget whatever it is that’s making him scowl like that all the time, and then maybe non-Eagle Sam can slip in a quick reminder about American Imperialism and how it’s a bad thing. But then it’s gone! You’re a goldfish! We’re all goldfish! Smile! You cannot tell me you don’t want to see it. The Rodin sculpture and the sock puppet. The veteran leader and the newly appointed. Isaac, reformed bully, hanging out with Kermit, reformed nothing because he’s never once done a single thing he wasn’t supposed to. Isaac has so much to learn from Kermit! Because in the nicest way possible, Isaac is very easily influenced. When Jamie was telling him to beat up on Nate, he just did. When Nate told him to be intimidating without being physical, he did. And when Roy told him to never stop breaking TVs, you have to imagine not a TV in all of London was safe. Not that Isaac will mindlessly follow whoever tells him to do something, but he’s great at taking lessons other people have had to learn. He’s got enough heart and, let’s admit it, temper to be an amazing player, and now could have the combined resources of Ted Lasso and Kermit the Frog to teach him about being a great captain. AND Beard is there! Forget team captain, Isaac for President.