We Are Lady Parts is a six-part British series about an all-girl Muslim uber-feminist punk band determined to make it big without selling out their art or their identity. You may be asking yourself, how do you reconcile being good practicing Muslim woman with the hardcore liberating fury of punk subculture? Very easily actually thanks to writer, creator, (and song-writer), Nida Manzoor who’s packed so much comedy, rage, heart, and–dare I say–horniness in this incredible series airing on Peacock now.

If you don’t fall in love with Amina Hussein (Anjana Vasan) from the first scene you’re nothing but a heartless cyborg and should go off into space with Jeff Bezos next month. It’s an incredible opening scene watching Amina on a “husband quest” with her parents (who deserve their own spin off by the way). It’s not going well. Despite the “shoulders of a Mesopotamian warlord,” her potential husband and his parents are an uptight, humorless bunch who consider Amina’s outfit immodest (she’s wearing a hijab) and music haram, or “forbidden.” Amina, however, is delightfully awkward, earnest and quixotic. She breaks out into fantasies of singing (really well) with sock puppets in her closet that is as heartfelt as it is absurd. But even her imagination didn’t prepare her for Lady Parts. What you have to understand is, I’ve never met girls like this before.

The brilliant part of this show is not just the prejudices Lady Parts experience from nonMuslims. They’re an anomaly even to their “own kind.” Amina’s quest for a husband who shares her culture and religion is not going to work if she plans on being in a punk band (at least not with the men she’s meeting) and even her newly engaged best friend Noor (Aishay Hart) is not having any of it though we do see her coming around a bit at the end.

While Amina is determined to find a husband on a Muslim dating app, Saira (Sarah Kameela Impey) lead singer of Lady Parts is determined to avoid marriage at all costs. Tatted up, hair uncovered, jeans ripped, she’s the polar opposite of Amina with zero intentions of raising a family of her own. The band is her family; Ayesha (Juliette Motamed) the properly angry drummer who has zero fucks to give, Bisma (Faith Omole) the zen bassist who’s authored a comic book about homicidal girls on their periods (my biography basically). And the band manager, Momtaz (Lucie Shorthouse) whose background is a mystery (she may or may not have done time for arson and/or divorced some sheikh) but presently she sells lingerie for all sorts of sexual needs, from “shag me kindly” to “shag me hard” and everything in between. 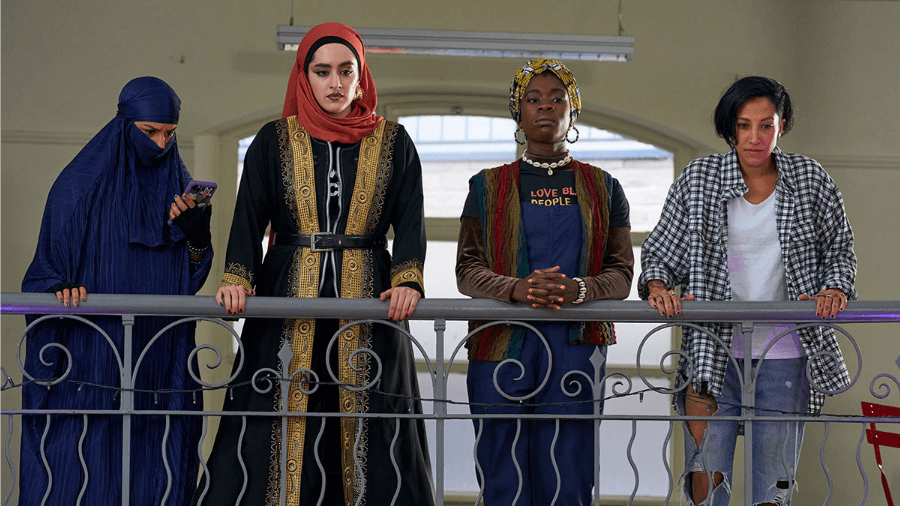 Despite their day jobs, they’re ride or dies for each other and this band. We’re sisters who pray together, play together. If they want to have a chance at the Music Smash competition, they need a lead guitarist. Ayesha uses her handsome brother with “eyebrows you can hang onto” Ahsan (Zaqi Ismail) to pass out flyers in the hopes of reeling in “a thirsty bitch with a shred of talent.” That thirsty bitch turns out to be Amina, a PhD student in microbiology with big dreamy eyes who’s obsessed with Don McLean and happens to have a huge crush on Ahsan (who doesn’t though, amirite?) The only one who’s convinced Amina is the right fit for Lady Parts despite the fact that her “nervy disposition induces diarrhea and vomiting” is Saira and us. Her potential for greatness is evident from the beginning and all you want to do is yell You are too good to settle. Dream bigger! Which is essentially–and to my surprise–what Amina’s parents are telling her.

Usually the brown immigrant parents are the ones fueling the urgency for their kids to get married. My mother aged a good fifty years while I was in my twenties dating randos who did not meet her Iranian immigrant parent criteria. So Amina’s lighthearted, hilarious parents advocating for their daughter’s happiness despite what was culturally expected of her was a breath of fresh air I did not know I needed. I related to We Are Lady Parts in ways I didn’t expect. Not so much the religion part. I’m Jewish and not a very good one at that. The last time I prayed was to fit into a size 2 dress, so such commitment to worship and God is not my jam (unless of course, it gets me into a size 2 dress which it did not). But for Lady Parts, prayer is as big a part of their ritual as rehearsing “Voldemort Under My Headscarf.” The quiet and peaceful time spent praying together side by side on their rugs is kind of enviable, a much needed meditation after an overwhelming day of dealing with personal dramas that just crowd and overwhelm your brain and heart. Praying is as cathartic for them as their insanely intense, indignant, and loud music.

Because I have a complicated relationship with my own faith, I completely get and appreciate how different each one interprets hers. I’m a big believer in cherry picking. If I didn’t cherry pick and adhered to every single rule I’d have to smear the blood of a sacrificed lamb on my door. But can you imagine the HOA fees? What the women of Lady Parts accommodated are teachings of Islam to meet their modern values and are not blindly following anything they don’t believe. I get this. In their estimation, being punk, getting high, exploring their sexuality, and raging against every “Bashir With the Good Beard” does not make them shoddy Muslims. And wearing hijabs, praying, and having traditional families also does not make them hack punks.

And speaking of Bashirs with a good beard, the men’s facial hair game in this show is off the charts. I’m not sure if this was on purpose (thanks to the seamless craftsmanship of Manzoor), but not only does We Are Lady Parts pay homage to the incredible diversity of Muslim women, but also gives a much needed and overdue shout out to Middle Eastern and Muslim men’s hotness. Look at Ahsan and Abudullah (David Avery) and tell me you couldn’t find someone more qualified to play Prince of Persia than Jake Gyllenhaal. (Not hating on Gyllenhaal but come on, it’s not Prince of Sweden.)

Even more importantly, they’re not depicted as angry terrorists, wife beaters, or falafel truck guys, but just young men who are adorable simps or devoted husbands like Wasim (Demmy Ladipo), who runs a poetry night at a bar. You can’t help but root for everyone on this show, not just Lady Parts. Their chemistry is so infectious and real, especially Ahsan and Amina who I swear if they don’t hook up by season 2 I’m going to burst into the writer’s room and – very respectfully – demand my needs are met.

That’s not true. You could not root for Zarina (Sofia Barclay) a millennial influencer, and new modern day villain, who wants to feature the band in an online magazine. Once again, Saira’s instinct is correct. Zarina ends up being a “snake” and not only breaking Ayesha’s heart but almost sabotaging the band by making them out to be some sort of anti-Islam feminist band when they’re a pro-Muslim feminist band.

Zarina did ask all the questions we have to admit we’d also been thinking, like why does Momtaz (“feminism, innit?”) wear a niqab and how does Ayesha’s homosexuality fit in with her faith, except instead of sincerely asking and understanding, Zarina manipulates and misrepresents them for clickbait. The internet mob acts accordingly and they were met with a lot of angry backlash which led to an obvious breakdown and break up of the group.

The upside of the internet is that for every ignorant troll there is an insightful pixie (that’s the opposite of a troll, right?) who connects deeply with the music and message. And that’s exactly what happened. There were a profound number of pixies who’d been waiting for Lady Parts in their lives and didn’t even know it. Like us.

If there’s one thing you can learn from this ensemble is that there is no shortage of Middle Eastern, African, or South Asian talent out there. From the writing, to the acting and the music, this show is all around as much fun to watch as it is mind opening.

A big “mubarak ho” to Manzoor and the incredible cast. 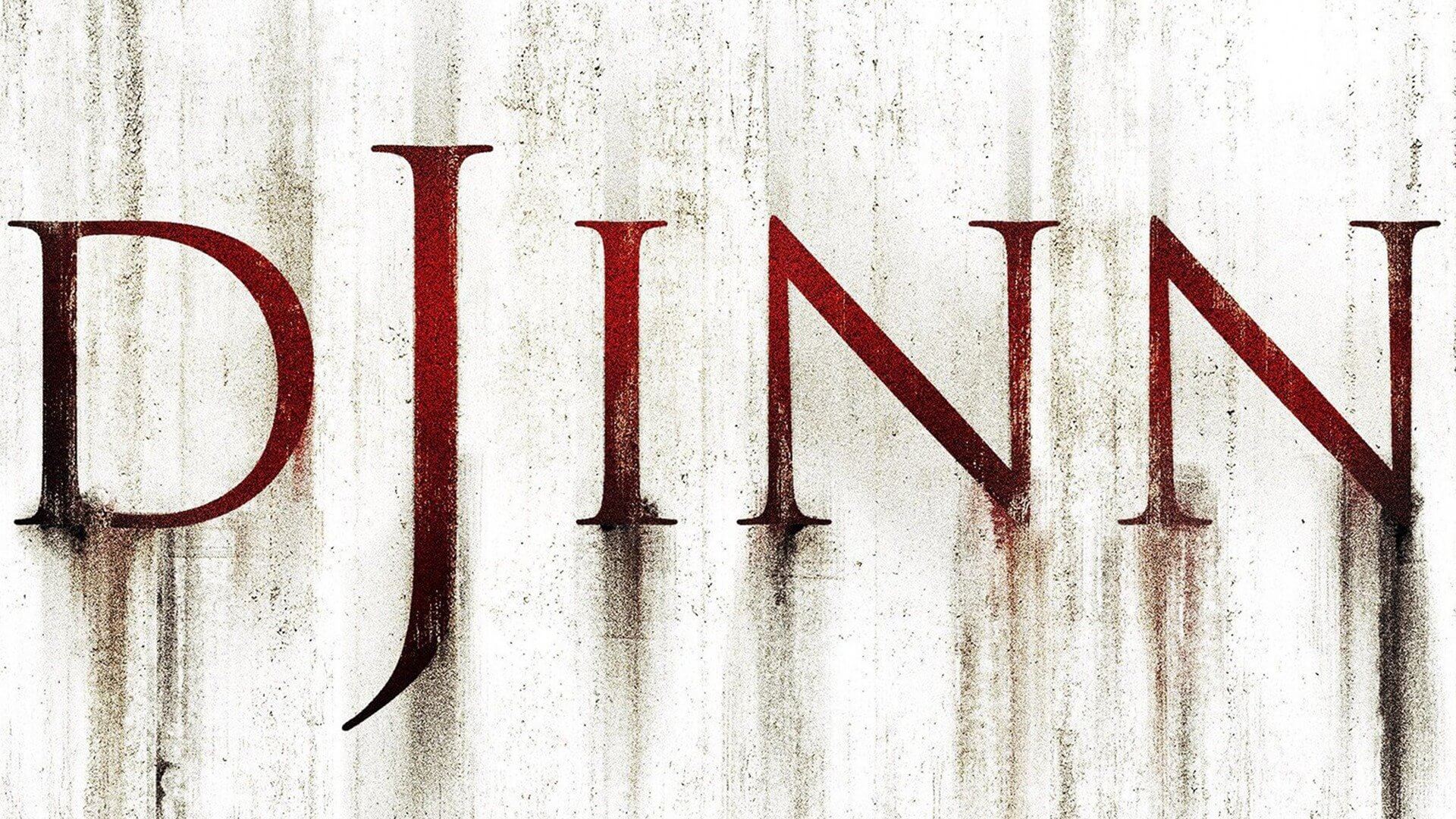