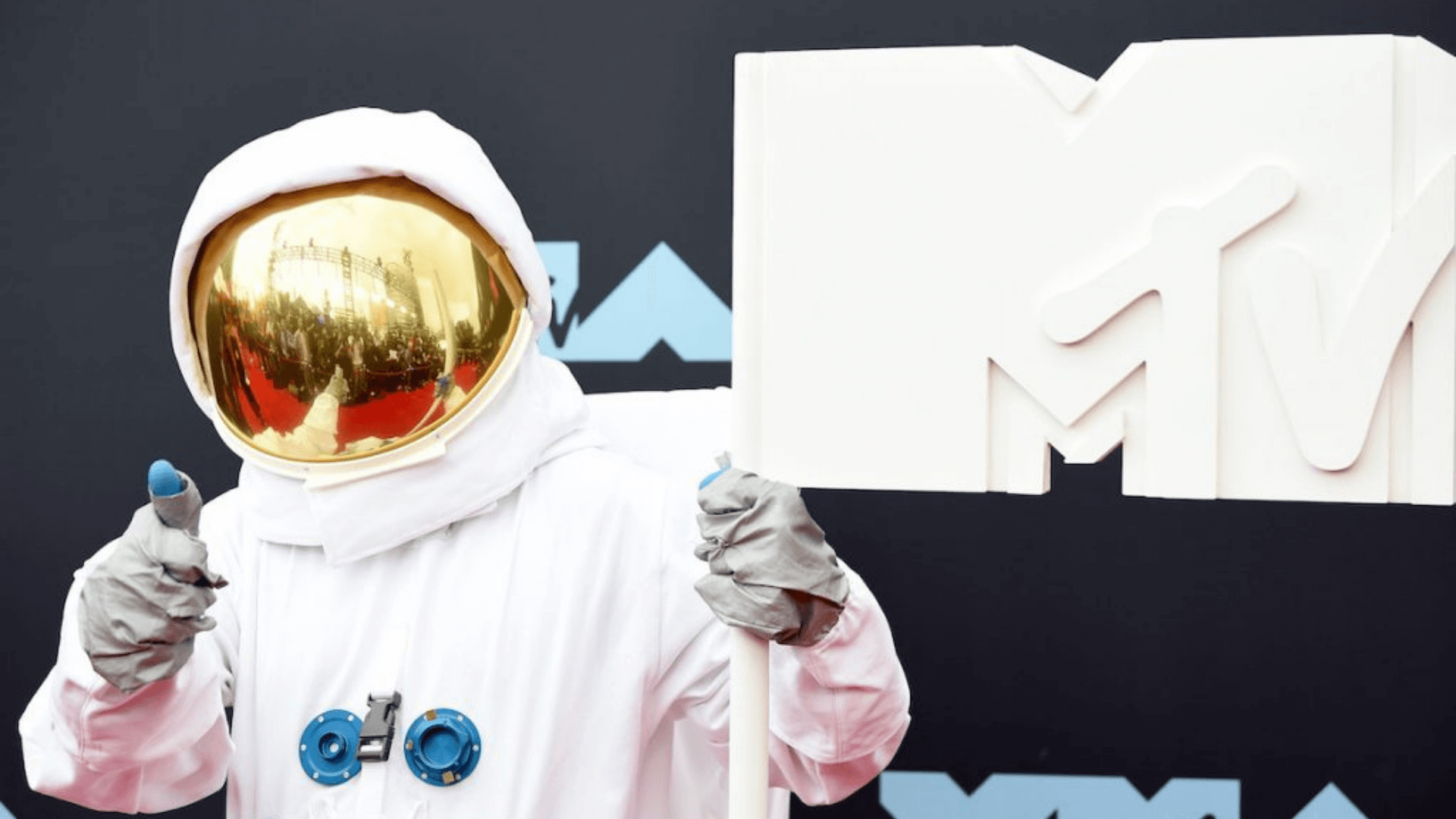 The VMAs were back in person on Sunday to celebrate music videos, the artists who make them, and the butt cheeks who appear in them.

Doja Cat hosted the event and had an interesting collection of ensembles throughout the night. She started off looking stunning in a corseted black gown, then a beautiful red jumpsuit for her performance, and then it was downhill after that in a weird quilted rainbow worm suit which she was wearing when she accepted an award for Best Collaboration. (I never thought I’d be dressed as a worm while accepting an award.) And then she moved on to another gown in which she also look great, except for the chair hat on her head, which she later used to sit on. I guess that’s functional fashion? And finally she came out as an Amish duck? I don’t know. I’m not mad at any of this. She’s Doja Cat and I’m here in my PJs trying not to fall asleep during this three-hour show on a school night.

Doja Cat, she's the #VMAs hostess with the mostest outfit changes of the night. (📷: Getty) pic.twitter.com/WyQYHD0MM2

I hate to not enjoy award shows. Seems like there’s an amazing amount of hard work and creativity that goes into making a giant astronaut stage and heartfelt performances and what looks to me like backbreaking choreography, but as usual, by the end I felt like I wasted three hours of my life.

One solution is to make these shows shorter. Actually, that’s the only solution. For the love of God make them shorter. I’ll buy all the Doritos and Extra gum you want if you’d also just cut down on the commercials. I get it, Burger King makes food for real people.

Though there were a lot of ghosts of VMAs past, like Cyndi Lauper (who won the first VMA in 1984); boy band relics like Lance Bass, Nick Lachey, and AJ McLean; R&B icons Ashanti, Ciara, Wyclef Jean, and Fat Joe; and even a performance by Busta Rhymes, who went on a weirdass rant recently but I had to put my rage on hold because I love every one of the songs he performed. I’m curious if kids these days know who all these people are. They definitely know VMA icon Britney Spears, who was not there but still got a spotlight when she announced on Twitter her engagement to her trainer, my fellow Iranian, Sam Asghari. (One word for you Britney: prenup. I love my people, but we all agree, something about him just doesn’t sit well with us.)

vmas: "we are the biggest night in pop culture"
britney: hold my snake pic.twitter.com/MARZhBkeET

It was nearly 11 pm when almost-naked Megan Fox and Kourtney Kardashian introduced their “future baby daddies,” Machine Gun Kelly and Travis Barker, respectively, who performed “Papercuts.” Nothing personal against these couples, but I think the couple of the night was Justin and Hailey Bieber. I think those two kids are gonna make it.

Justin had been MIA from the VMAs for six years but had a successful homecoming tonight, taking home awards for Artist of the Year and Best Pop for “Peaches” while looking like a toddler lost in his father’s suit jacket.

Congrats to @JustinBieber for winning Artist Of The Year at the 2021 #VMAs! pic.twitter.com/taTycEqyNJ

Personally the night could have ended for me after Olivia Rodrigo’s performance for “Good 4 U.” She is a goddamn treasure and deserved her three moon men for Song of the Year, Best New Artist, and Push Performance of the Year. I’ll admit when she blew up at first I was skeptical about a teenager knowing so much about heartbreak. I thought she was melodramatic, but she won me over because she is actually truly talented and no amount of cynicism can make me deny that. Also, she gives me major 90s vibes and as a millennial I appreciate the homage she pays to the greatest era of all time.

Another artist I looked forward to seeing was Lil Nas X, whose videos are just visually stunning and he never disappoints on stage–and didn’t this time either. Billy Porter gave a short but very meaningful intro and welcomed all the “Black boy joy” on stage.

However, I did not like his sparkly purple outfit. Everything about it–including the hair–looked like what an old Persian mother would wear at her son’s wedding. I say this out of love. He could have done better.

In the outfit category, Olivia Rodrigo nailed it with her pink-orangish Atelier Versace gown. She looked like a dream.

Olivia Rodrigo in Versace at the 2021 MTV #VMAs! pic.twitter.com/7kv4zXCtN0

In honor of MTV’s 40th birthday, Madonna, the queen and VMA veteran, opened the show by reliving her arrival in New York City 40 years ago when she was “19 and terrified.” Around the same time, a channel dedicated solely to music was born (and then died and was reincarnated as a channel that airs reality shows like Floribama Shore).

“They said we wouldn’t last, but we’re still here motherfuckers.” I mean, technically you are. But MTV isn’t really the MTV of the past. Back in the day, that was the only place to go for music videos. I remember staying up late waiting for the premiere of Michael Jackson’s “Remember the Time.” Back in my day, we earned our music videos. Now you can enjoy them anytime/anywhere, like some sort of hedonist.

SURPRISE! The #VMAs begin with an introduction from the one and only @Madonna pic.twitter.com/YmWtjabVJ7

Kacey Musgraves gave her first VMA performance, which doesn’t sound right. How’s this her first? Like Rodrigo, she’s another fierce woman who evokes a lot of feelings I try to suppress on a daily basis. Also, as recently discovered by diligent TikTokers, she may have had her marriage potentially ruined by Olivia Munn, but let’s not let that cast a shadow on her incredible performance of “Star-Crossed.” The stage looked like a combo of Madonna’s “Like a Prayer” video and the Phantom of the Opera’s underground lair. Very emo.

There was a category this year called “Video for Good” that started years ago as “Best Video with a Message” to highlight artists whose music and video are about social change or an important message. Billie Eilish took that award for “Your Power,” and during her thank you speech added, “we need to protect our young women at all costs.”

We can’t wrap this up without mentioning that BTS won for Best Group and had there been a category for skincare goals, they would have won that too. Those boys are flawless and dewy at all times. And the GOAT band, the Foo Fighters, are now officially Global Icons and no longer just global icons in our hearts.

Even with all the highlights, and Doja Cat’s eccentric wardrobe, the VMAs were just OK. I wish this show would stop trying so hard and just be itself, the way the Burger King commercial kept preaching. The 51 Best TV References in Hip-Hop

Let’s look at some of the best times TV and rap overlapped!