I can recall a specific period of my teenage years when I would spend a lot of time on file-sharing sites searching for uncensored copies of Cannibal Holocaust and other video nasties. These were the last days for Kazaa and Limewire, and it’d take a full day to download a full feature-length film. It was also before you could acquire practically any film at the click of a button.

But as anyone who recalls this era of file sharing will tell you, you were never quite sure what you would see when you pressed play. It could be the grotesque Italian found footage film you were in search of. Or it could be something much, much worse. And that brings me to V/H/S/94.

As the fourth installment in the V/H/S found footage anthology series, V/H/S/94 is a return to form after a dismal third outing. As always, each installment features a handful of short films in the form of newly discovered videotapes wrapped inside a frame narrative.

For V/H/S/94, that frame narrative is a crew of SWAT team members discover a cult compound filled with disturbing imagery and monitors all playing various grainy and distorted videos. It’s from these monitors that we are swept into the worlds of our four short films all set in the year 1994. The first of which — “Storm Drain,” written and directed by Chloe Okuno — follows a TV news reporter and her cameraman as they record a segment on local legend the Ratman. At the urging of their producer, the news team ventures further into the storm drain said to house the mythical human-rodent hybrid.

“Storm Drain” and its following short — “The Empty Wake” — both make the most of the inherent creepiness of their settings. Trading out dark and dingy sewer tunnels for an empty funeral home, “The Empty Wake” documents a mortuary worker tasked with spending the night alone alongside a coffin containing a man who recently passed under grizzly and peculiar circumstances. While recording the dead man’s wake, our protagonist deals with power outages and odd noises as a worsening storm nears and things take a gruesome turn. 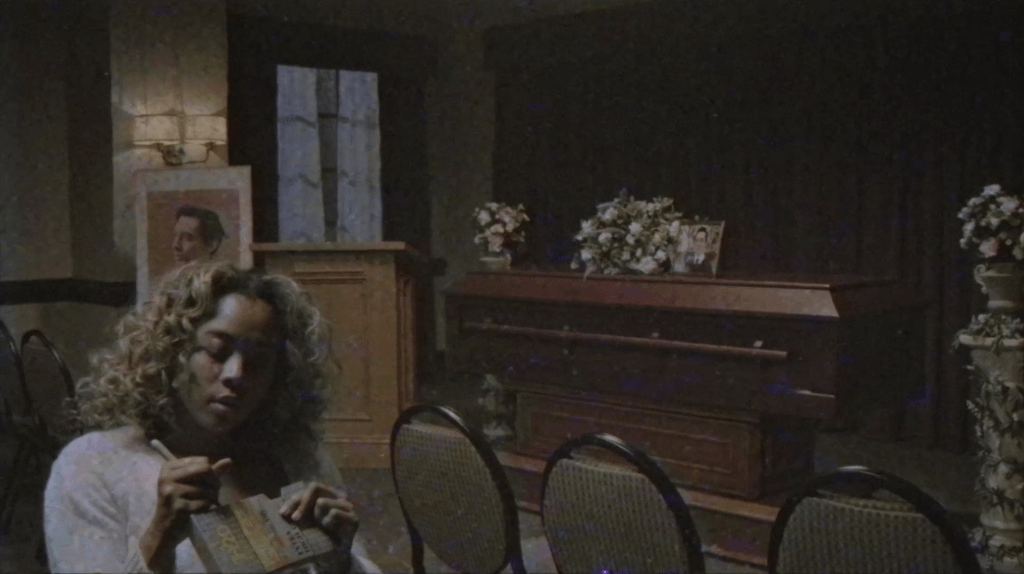 “The Empty Wake” is written and directed by V/H/S alum Simon Barrett. Barrett is probably best known for writing You’re Next and the woefully under-appreciated hybrid action/horror The Guest. Also returning to the franchise is Timo Tjahjanto, who brings us our next entry, “The Subject.”

“The Subject” plays the fastest and loosest with the found footage structure. Whereas all the other shorts in this installment of V/H/S are shown from the perspective of mid-90s video cameras, “The Subject” is shown from the perspective of a young woman who has been abducted by a disgraced scientist obsessed with upgrading his unwilling patients with mechanically augmented body parts. In this case, the young woman’s eyes and most of her head have been swapped out for a mechanical recording device. As the action unfolds and an elite police squad invades the medical compound, we view the chaos from this patient’s perspective. The action is kinetic and gruesome, but don’t think that this short is lacking in heart. The main characters earn plenty of sympathy by the end of what I think could be expanded into a full-length adaptation.

V/H/S/94’s final entry (aside from wrapping up the frame narrative) is perhaps its most currently relevant despite being set almost 30 years ago. “The Terror” comes from writer/director Ryan Prows and follows an incompetent, yet dangerous militia looking to carry out a domestic terrorist attack in hopes of restoring America to its “former glory.” At the heart of their plan is a mysterious, bloodlike chemical that the men mine from the body of their prisoner. I won’t reveal the twist ending, mainly because it’s one of the rare twists that actually improves upon everything that precedes it. The ending of “The Terror” serves to recontextualize the short and manages not to be a twist for twist’s sake.

Watching V/H/S/94 was a bit of a relief. The first two installments in the franchise were welcome entries into the popular horror subgenres of anthology films and found footage. Unfortunately, these were followed by V/H/S: Viral. Even coming in with a lot of goodwill from the first two films and an admitted bias for found footage horror, I could not have been more disappointed by this third installment.

I was worried that this meant the demise of a film franchise that I really enjoyed. Luckily, it seems that it may just go down as a low point in an otherwise fun series of horror films. While framing your film around video cassettes and the year of 1994 may seem overly nostalgic or even a bit antiquated, there’s something enjoyable about looking back on the world through that grainy lens. Especially when everything else we see comes to us in dazzling 4K.

There is something thrilling about trying to peer through grainy images, glitchy pixels, and low-resolution film to find what’s lurking beneath. There’s a certain style to all the blemishes. And it reminds you of a time right before everything became so accessible. A time when you’d go looking for something, not knowing what you’d find. It’s the same reason that I still hold onto this.