We start Ted Lasso’s third episode of the second season with the quiet return of Sassy Smurf! Who’s Sassy? Rebecca’s best friend, who Ted slept with last season while they were on the road in Liverpool. And she’s not alone. She’s got her thirteen-year-old daughter, Nora, in tow. Rebecca is babysitting for the weekend while Sassy speaks at a work conference.

There is essentially zero awkwardness between Ted and Sassy, which is a breath of fresh air. Leave it to Ted Lasso to constantly break the ingrained drama expectations we all have from years of watching the same cliché TV storylines played out again and again, even on our favorite shows. Instead, Sassy and Ted hug and joke; they’re chill and Ted is normal, happy-go-lucky Ted.

When Ted leaves with one of his signature one-liners (“What do you say we do what the man says and make today our masterpiece?”), Rebecca can’t help but ask Sassy if Ted talked like that the entire time, to which Sassy replies: “The whole time. He’s so eager to please. It was fabulous.” *cue Rebecca choking up her biscuit* I’ll be honest, I really wasn’t a fan of Sassy last season. She just seemed a little too acerbic for Ted. But I’m open to having my mind changed.

At a press conference, Trent Crimm presses Ted, asking if the return of Jamie Tartt will shake up the “vibe” in the locker room. But Ted doesn’t think so. He thinks Jamie’s on a path to becoming a better man and Ted thinks of himself as Jamie’s “own Mr. Miyagi. Except without all that extra yard work.”

Down in said locker room, the vibe is great! But Jamie is not a part of it. Keeley does her PR thing and encourages the boys to join this new dating app she’s promoting called Bantr. The app has no pictures and encourages people to connect with their words. What a novel idea! The boys agree to join.

While they banter back and forth about it, Jamie sits off to the side like the uncool kid on the playground. And it’s kind of sad. Jamie might be great at scoring goals out on the pitch, but he’s not scoring any goals with the guys, who ignore him whenever he speaks. So, Jamie decides to call a spade a spade and gives a little speech. He says he knows he was a shitty teammate, but he’s a new man now and he’s sorry. He promises to make it up to them. But the guys are not going to be so quick to forgive, especially Colin, who reminds Jamie that, “You called me a jaundiced worm. In a profile for my hometown paper.” Okay, that’s hilarious. But fair point. The guys won’t be forgiving Jamie anytime soon.

Sam’s got bigger problems than Jamie though. He’s the new face of Dubai Air and after the first print ad drops, he’s excited to show his parents and score them free tickets to come to his next match. But Sam’s usually supportive father is upset to see his son as the face of a corporation that’s caused so much hardship and corruption back in their home country of Nigeria. It’s a much deeper chord than this show typically strikes, and that’s the entire theme of this week’s episode.

Meanwhile, Rebecca’s having a hard time connecting with Nora. Things are a little awkward since she ditched Nora and Sassy for six years. Rebecca’s not sure what to do with a thirteen-year-old, but luckily, she’s not the only one stuck babysitting for the day. She and Nora run into Roy and Phoebe, and if there’s anyone who’s great at connecting with little girls, it’s Roy Kent. That’s the eighth time I re-wrote that last sentence and it still sounds super creepy, but you know what I mean! Roy is like the little girl whisperer… Dammit, that sounds worse. Whatever. He’s good with kids! 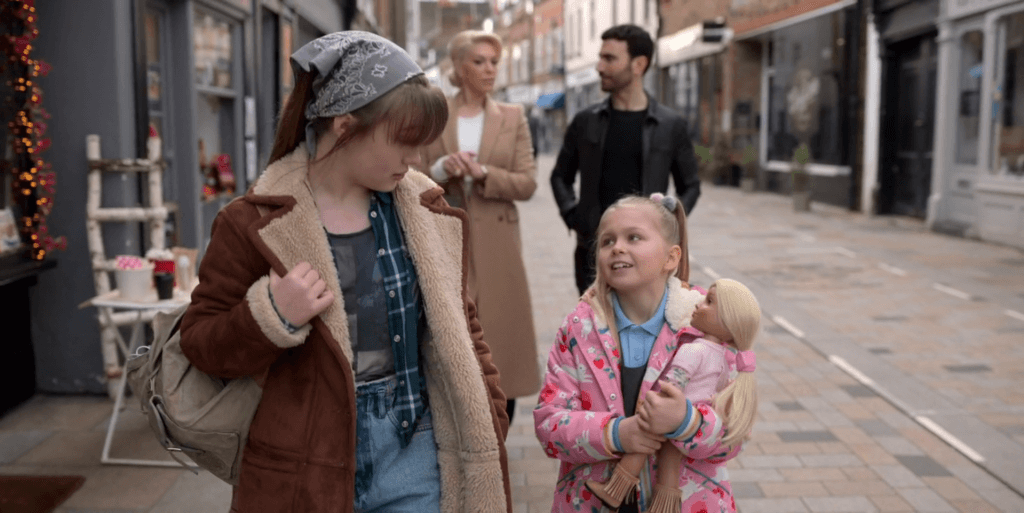 Roy offers Rebecca some wisdom: Stop trying so hard. Kids don’t need a parade every day. Just make Nora feel like she’s part of your life. Rebecca decides to listen to him and stops trying to impress with fancy tea parties and shopping excursions. Instead, she just invites Nora to shadow her at work.

And it turns out the kid’s got hustle. Nora plays up the “little kid way wiser than her years that has no real basis in reality but is still fun to watch” trope perfectly. Sam interrupts her pow wow with Keeley and Higgins and tells everyone he wants to pull out of the Dubai Air ad because of their environmental meddling in Nigeria. It’s a financial blow and puts the team in a tough spot.

Rebecca weighs her decision about how they can keep Sam happy without losing Dubai Air as their biggest sponsor. Nora hits her with the global truth: “Sometimes you have to do the right thing, even if you lose.” So, Rebecca plays hardball with the CEO of Dubai Air’s parent company and tells him Sam won’t do the ad. Said CEO then demands that she gets rid of Sam, but with some encouragement from Nora, Rebecca plays her “boss ass bitch” card and refuses. And it works! The CEO caves. Sweet victory… for now. Back in the locker room, Jamie’s still having a hard time connecting with the guys, which leads Ted to pull out the biggest stop he has: Led Tasso. Who is Led Tasso? As Beard puts it: “A last resort.”

Led Tasso is essentially Ted’s evil twin. He screams and yells and forces the players to run thousands of laps for no reason. It’s all a ploy to make him the team’s common enemy instead of Jamie. Ted thinks he’s pretty clever, but Doc Sharon’s not particularly impressed. She asks Ted if the Led Tasso routine has ever worked. And he admits that no… it hasn’t. Except for one time at Chuck E. Cheese, but that does little to convince Sharon.

Since Led Tasso didn’t help matters much (surprise surprise!), Jamie is still sulking about being on the outs with the guys. He tries to confide in Keeley about how he’s really feeling. Keeley’s not having it, though, and marches Jamie to Sharon’s office so he can talk to someone who actually gets paid to listen to him complain. We don’t know what she says to him, but she must have gotten through somehow.

Before their big match, Sam decides that pulling out of the Dubai Air campaign isn’t good enough. He’s still running around the pitch with their name plastered across his chest. So, he takes black tape and covers the logo on his chest. In a show of solidarity (and to get back on the team’s good side), Jamie does the same, and the whole team follows suit.

Richmond ends up losing, but their protest is the talk of the town. During the post-game press conference, Ted lets Sam do all the talking, but Sam doesn’t want to talk about football. He takes to the mic to accuse the Nigerian government of corruption, which is definitely going to make some waves. Dubai Air is pretty pissed off about the stunt, but Rebecca’s ignoring their phone calls.

There might be rough seas ahead, but it’s all calm waters back in the locker room. In fact, it’s a party! The boys aren’t upset about the loss because they finally broke their tie streak. It’s especially a win for Jamie, who’s finally back in everyone’s good graces. This week’s episode was different than the standard Lasso fare, but I think the show is stretching its legs a bit, offering Lasso-y commentary on the current state of the world while still showering us with all the same one-liners, quips, and heartfelt moments we’ve come to expect and love about this show. They’re letting us know that while there will be darker moments, it’ll always be Ted Lasso, so we shouldn’t worry. Let’s hope that continues to be true next week when it looks like Richmond may very well be sponsorless!

Comedy
Jason Sudeikis
In this article: