A large portion of the overall-slightly-underwhelming-for-me second season of Ted Lasso has been focused on what happened in Ted’s past that would be causing his panic attacks and his eventual ability to accept that he needed professional help. Last week’s “No Weddings and a Funeral” gave us a much deeper look at Ted’s dad’s death, including the heartbreaking acknowledgment that he was the one who found his dad, and gave us an insight into how Ted could simultaneously be the optimistic beacon of hope trying to help people become the best versions of themselves and be completely unbearable at times. (Also his line to Michelle in “Tan Lines” about how he promised himself he would never quit anything in his life just got, somehow, significantly sadder. Oh, Ted, it’s OK.) Ted is the way he is, both good and bad, in large part because he’s stunted. In a lot of very real ways, Ted is the sixteen-year-old boy still angry at his dad for letting him down, and it was wonderful to see Dr. Fieldstone finally make some progress on getting Ted to process through that.

And I hope Dr. Fieldstone has an empty schedule because now it’s Rebecca Time.

You might remember back in episode two (the second-best episode of the season so far) that Ted asked Rebecca if she’d ever been to therapy, and she answered “What for?” Oh, but then she accidentally immediately answered her own question by stating:

I can diagnose myself in a heartbeat. I thought being invulnerable would protect me so I pushed people away for years leading directly to my greatest fear: being alone.

I want to make sure that I treat both the fictional mental health issues these two characters are experiencing and a real-life reader’s possible aversion to therapy with respect, but when she says that, what I hear is, “Why would I need a doctor? I just have cancer.” And, well, you need the doctor for the cancer. The show even made it clear that “yes, this is the kind of unresolved trauma you talk to a therapist about” by intercutting the scene where Ted talks to Dr. Fieldstone with the scene of Rebecca talking to Deborah. Because Rebecca seeing her dad’s infidelity and having to keep his secret has, in therapy terms, completely jacked her up. I’ll now be accepting my therapist licenses, thank you.

Not that Rebecca isn’t a strong, successful, powerful woman who has people that love her. You can be all of those things and somehow still be jacked up because people are magnificent in their complexity. Mostly what I’m talking about is that Rebecca Goddamn Welton, Woman of Football, Invader of France, said this: 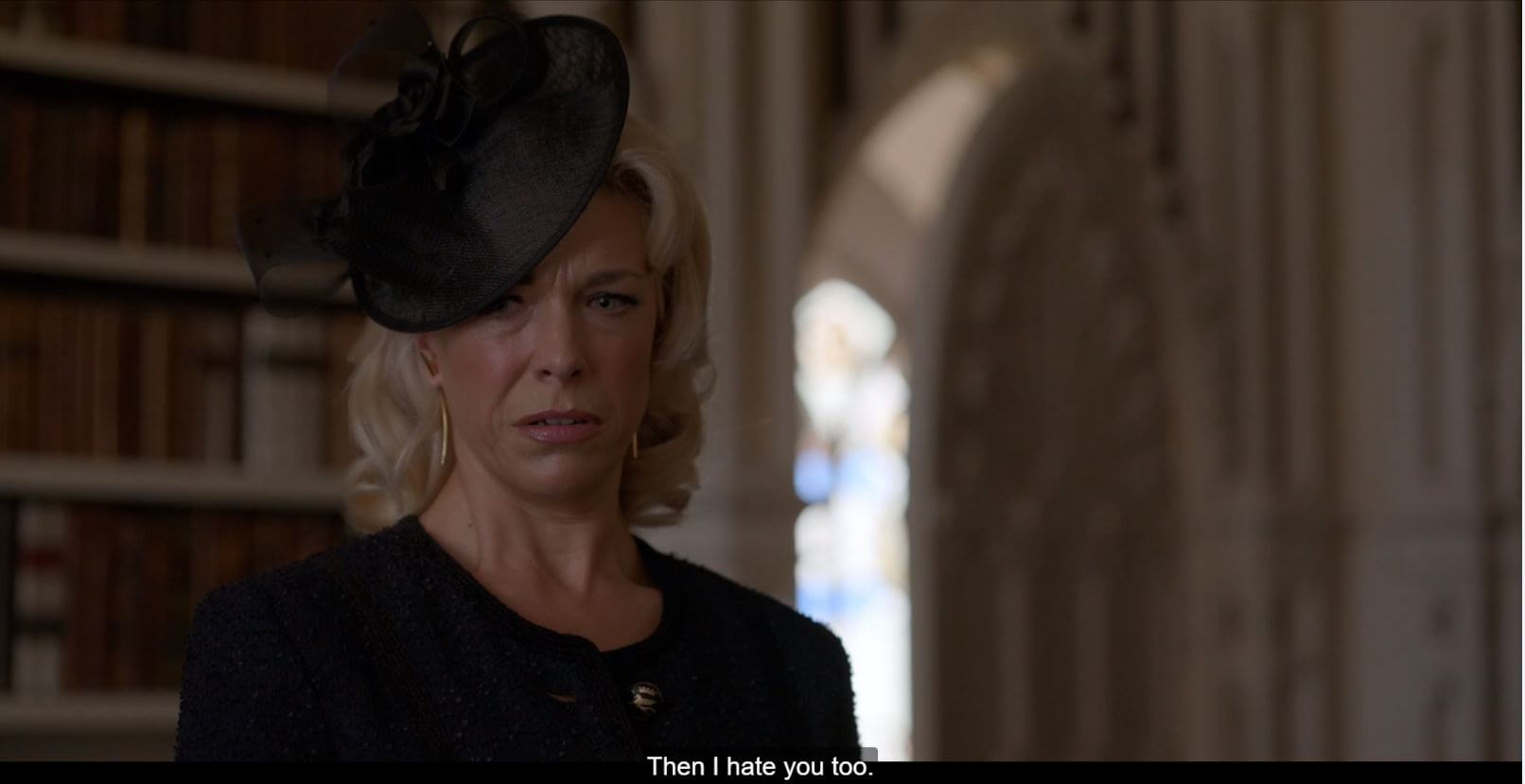 to her mother on the day they buried her husband.  That’s not a thing that well-adjusted adults do, Rebecca.

Again, it makes sense. Rebecca has been carrying around the damage of her father’s betrayal and the burden of needing to keep it from her mother. I have to imagine that Deborah treating Rebecca like less of a daughter and more of a confidant later in life probably didn’t help much. Actually, let’s spend a second on that. Rebecca was probably around sixteen when she caught her father cheating? Then a few years later, Deborah tells her she’s leaving Paul causing what I’m sure would have been a tremendous relief for Rebecca because she’d no longer have to carry that secret? Only to have Deborah go back to Paul and stop speaking to Rebecca for “a bit.” I’m starting to come around on that whole “I hate you too line” up there.

Catching her father with Mrs. Reynolds was such a huge moment for Rebecca that she spent her life hating her father and being unable to move past it. It did not, however, stop her from marrying someone exactly like him. I don’t feel comfortable enough stating that Rebecca married Rupert out of a misguided sense of fixing her parents’ marriage, but she did tell us that she felt she handled her marriage better than Deborah handled hers. When Deborah tells her that she knew about Paul’s cheating, Rebecca’s response is “You knew, and you did nothing?” Because in Rebecca’s mind, divorce is the only acceptable form of “doing something.”

Quick tangent here where I get dangerously close to defending Rupert Mannion *shudders,* but I would like to point out cheating wasn’t what made Rupert terrible. Not great, sure. It’s a shitty thing to do and no one should be expected to stay with a cheating partner. But (and yes, I like big “Buts” and I cannot lie) Rupert cheating was really only like the eighth shittiest thing we know he’s done. A List of Rupert’s Greatest Hits:

And, sure, we have to assume that Rupert probably wasn’t doing a lot of those specific things to Rebecca while they were married, but that kind of behavior doesn’t come out of nowhere. Rupert’s problem isn’t that he’s unfaithful, it’s that he’s an unrepentant dick who feels entitled to whatever he wants including vindictiveness if he doesn’t get it. Rebecca was so focused on just the cheating, she doesn’t seem to have noticed that she was married to an abusive asshole.

The saddest part about that? Rebecca actually knows that it wasn’t her father’s cheating exactly that hurt her, but the secrecy that it forced her into. She doesn’t say that she hated her father because she caught him in a compromising position. She says she hated him because when she came back the next day, he refused to talk to her about it. Paul’s unforgivable sin wasn’t doing Mrs. Reynolds, it was failing to protect his daughter from the pain of it. It wasn’t the sex, it was the shame. Good news though? There’s a whole industry dedicated to helping you get rid of those secrets! Not the good kind like Rebecca and Sam that she was secretly (punintentional) psyched to share, but the painful kind that make you push people away or have panic attacks or behave like a teenager having a tantrum because moms make you do that sometimes. There’s even someone who works in your building who can help you figure out how to overcome the shame and anger that you’ve been carrying around for years! It’ll be great! But seriously, Rebecca, stop diagnosing yourself and go talk to someone.  You deserve it.