As per the usual disclaimers:

I loved it completely and without reservation. Including reservations on Beard and Jane’s seeming reconciliation at the end of the episode. I understand some have raised concerns over how the reconciliation happened and others have even been wrong enough to say Beard and Jane need to break up altogether, but here’s why Four Weeks Ago Me and they are wrong.

For starters, I need to state that I don’t think Beard and Jane’s relationship is perfect. Aside from the fact that nothing in this world is perfect (save Brendan Hunt’s delivery of the line “To make it easier for people to kiss my ass”), it’d be a mistake to assume a perfect relationship could exist that would satisfy everyone’s definition of perfect. Different people want different things (revolutionary idea, I know), but we still, as a society, have defaulted to a specific kind of relationship that we think is ideal, usually involving marriage and children. It’s so ubiquitous that one time a friend told me I should date a man I wasn’t interested in because he “seems like he’d be a good dad.” When I pointed out to her that I don’t want children, she said, “Yeah. But still.”

It’s in that same line of thinking that a lot of people have adopted what I refer to as the Optimization Relationship as the best possible. It mainly involves the other person continuing to make you better and a more alive person in every conceivable way, and super, completely, one-hundred percent is not for me. The closest example on the show being the Higgins. Leslie and Julie Higgins seem to love each other a tremendous amount and I’m happy for them, but I’m not interested in my relationship being the oxygen that gives me life. It sounds exhausting. Even if you could describe their relationship as “perfect,” it’s not what a lot of people want, so I don’t know how we could say it’s ideal.

While we’re here though, can we have a quick tangent on if their relationship is “perfect”? Because I’m having a hard time getting a few facts I know about Leslie Higgins to square with what he and the show have told us about his marriage. Namely this: I understand why Julie would dislike Rebecca since, at the time, Rebecca was making Higgins’s life a nightmare, but does she not know why Rebecca was being horrible to Higgins? Meaning, did Higgins hide from his wife the fact that he was actively helping his boss cheat on Rebecca, or is Julie willing to excuse her husband’s betrayal of someone he had a close enough relationship with that he literally picked her in the divorce? My point being, even in relationships as good as the Higgins’, things are never perfect.

Which brings us back to Beard and Jane. It’d be foolish-bordering-on-lying to say that they don’t have issues, but those issues aren’t necessarily insurmountable. Also, unlike my friend, colleague, and sometimes rival Thor, I don’t think the problems are all on Jane’s side. So now, let’s talk about what we know about Beard.

This again is not a shocking revelation, but it needs to be highlighted. Remember back in “Tan Lines” from season one when Nate asked Ted why he moved to London if he was worried about his marriage? Specifically why Ted flew 4,438 miles away from his wife? And his answer was that Michelle needed space? Ok, so what the hell was Beard doing there? Beard didn’t have a wife he was trying to give space to, but he also seemingly didn’t have any roots strong enough to keep him from packing up his life and moving to another continent because his friend needed him to. Yes, I get that it might have been a great career opportunity and maybe he just thought it would be fun to live in England for a bit, but it’s been established that no one gets Beard. Ted gets him a little (although not completely, hence Beard’s eye roll after Ted’s “bird by bird”), and Beard, despite his protests about the usefulness of long relationships, decided that was enough to make a commitment to. Beard isn’t a loner because he prefers to be alone; he’s a loner because he has trouble finding people who don’t make him feel lonely.

One of the biggest arguments in favor of Beard and Jane breaking up was Higgins’s line to Beard that Jane wasn’t making him a greater man. It was an instance of Higgins being completely right to say something to Beard, and Ted being completely wrong for arguing that they shouldn’t. But not because it convinced Beard to break up with Jane. This wasn’t just a matter of Higgins saying, “your relationship’s shit,” and the scales fell from Beard’s eyes. It was about figuring out what Beard did and didn’t know.

That scene, along with “BAH,” gave the audience a chance to expel the awkwardness of knowing someone’s thing sucks when they don’t know it. A lot of the information we got about Jane and Beard’s relationship seemed intent on making it look bad. They broke up and got back together, there was fighting, Jane threw Beard’s keys in the river (still not cool, Jane), but the worst part was how Beard seemed to be oblivious to it. Everyone cringed when he said Jane was moving in with him, and he continued smiling like a happy idiot. It’s like that Thanksgiving episode of Friends where Rachel screws up the trifle, and everyone has to pretend it isn’t garbage? But how the second Joey was like, “custard and meat are good,” no one was embarrassed for him that he was eating it? I don’t know why exactly, but knowing that someone is consciously choosing to do something, even if I wouldn’t do it, makes it easier to accept. Like, would I decide to watch Love Actually because it’s an Emma Thompson rom-com? No, I would not. But if you want to watch it knowing that Sense and Sensibility is right there? You do you, kid.

It was also a chance for Beard to objectively assess his relationship, and decide what he could live with and what he couldn’t. What he decided he couldn’t live with wasn’t Jane’s outbursts, but the fact that Jane wouldn’t say she loved him. He wasn’t asking her to act differently; he was asking her to commit more to him. She wasn’t making him a great man not because of what she was doing, but because of what she wasn’t. Which actually makes a lot of sense because  . . .

3) Beard Sees More When Jane’s Around

One of the benefits of being a loner/alone is that you’re often able to pick up on things that others might not have noticed (you know, since you’re not distracted by things like “people talking to and interacting with you”). Beard picks up a lot. It’s not just that he’s reading something new nearly every time we see him or that he’s able to hustle a trio of Oxford alumni based on what he picked up from dating a professor there. It’s that he’s also usually the first one to see something before others do. Beard brings Ted a beer exactly on cue and sits down on the bench with him after Michelle and Henry leave. Beard was the one to tell Ted that Roy needed to be benched in “All Apologies,” and he was the one that noticed Jamie sprinting downfield in “The Hope That Kills You.” He’s uniquely proficient at seeing. Also here’s a picture of his happy, beautiful face when he’s seeing her

And Jane makes him better at it. Way back when we first met Jane in “For the Children,” Beard liked that she could play chess without a board with him, but he fucked it up by ignoring what she was telling him about wanting to go dance. Not that he didn’t hear her, but that he heard her and ignored it. He didn’t see her at all. It’s why their scene in “All Apologies” acts as such a great foil to their earlier scene. When Ted comes into the bar that night, Beard can read him well enough to know what Ted wants (to be told that it’s fine if Roy plays) and what Ted needs (to be yelled at and told he’s being a selfish prick). That level of perception (in conjunction with the self-righteous yelling because Jane loves a scene but she’s not wrong about how hot that was) was what drew Jane back to Beard. Following it up with the “she’s been toying with you” line was just so Beard could show off at how well he could see her. He was hearing what she was telling him. He was picking up what she was throwing down. And when she said “that was the sexiest fucking thing I’ve ever seen,” he met her at “get your things.”

Before anyone tries to argue that I’m reading too much into what attracts Beard to Jane, I’ll remind you we got that answer from the man himself. 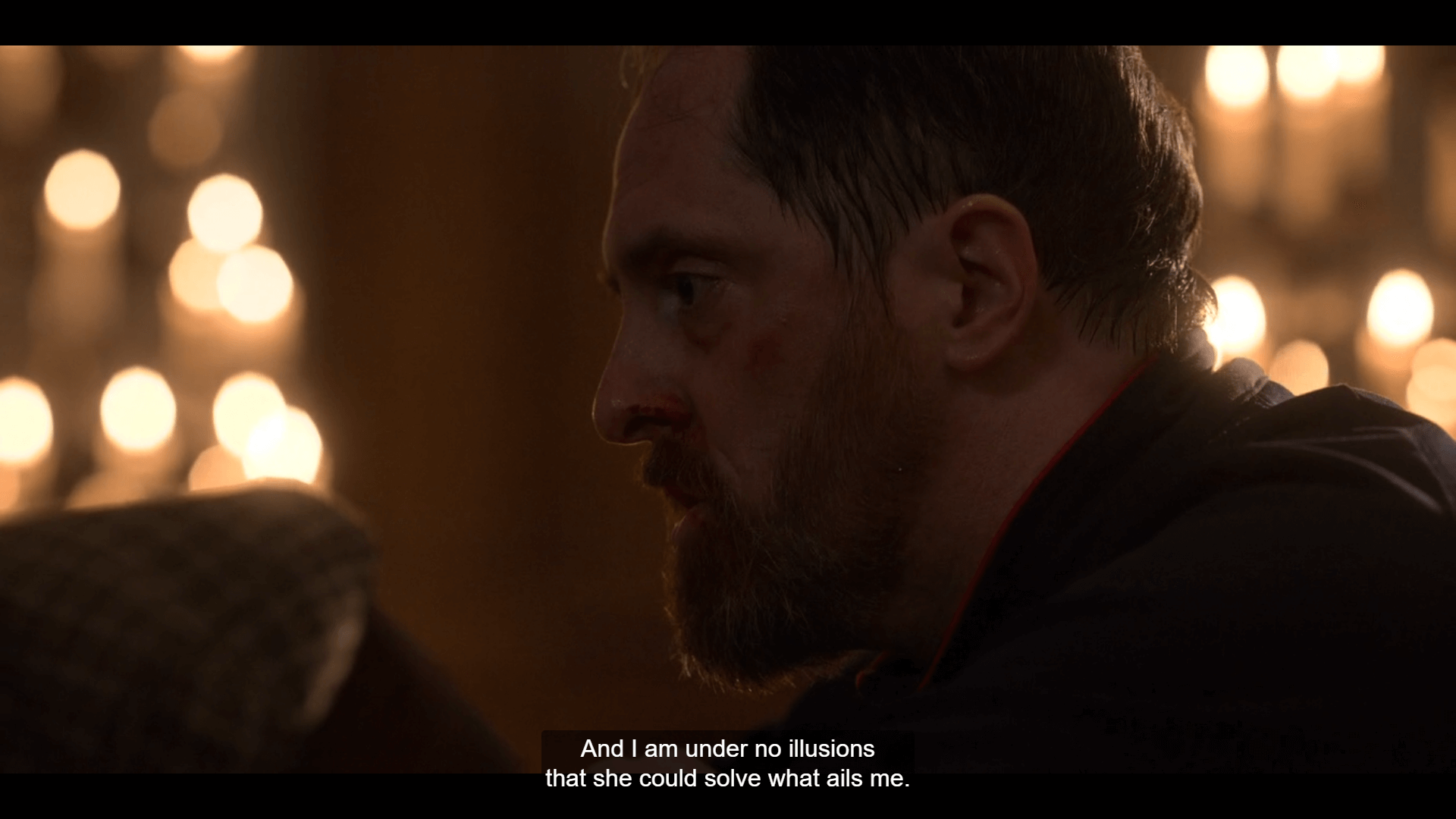 I might be able to someday read the words “more interesting” and not cry, but today is not that day. Because Beard’s admission right here pretty perfectly sums up exactly why he and Jane are good together. When you have a hard time connecting to people, as Beard’s ailments suggest he does, your best bet is to connect with things. You learn how to play games really well, you absorb as much knowledge of things as you can, you travel so you can experience places even on your own, and you hope that that’ll fill enough of your life to make it interesting and a little less lonely. And when you find someone who says, “here’s this entirely new world of interesting stuff that you’ll like because I get you”? Well, yeah, you put up with 72 missed calls for that.