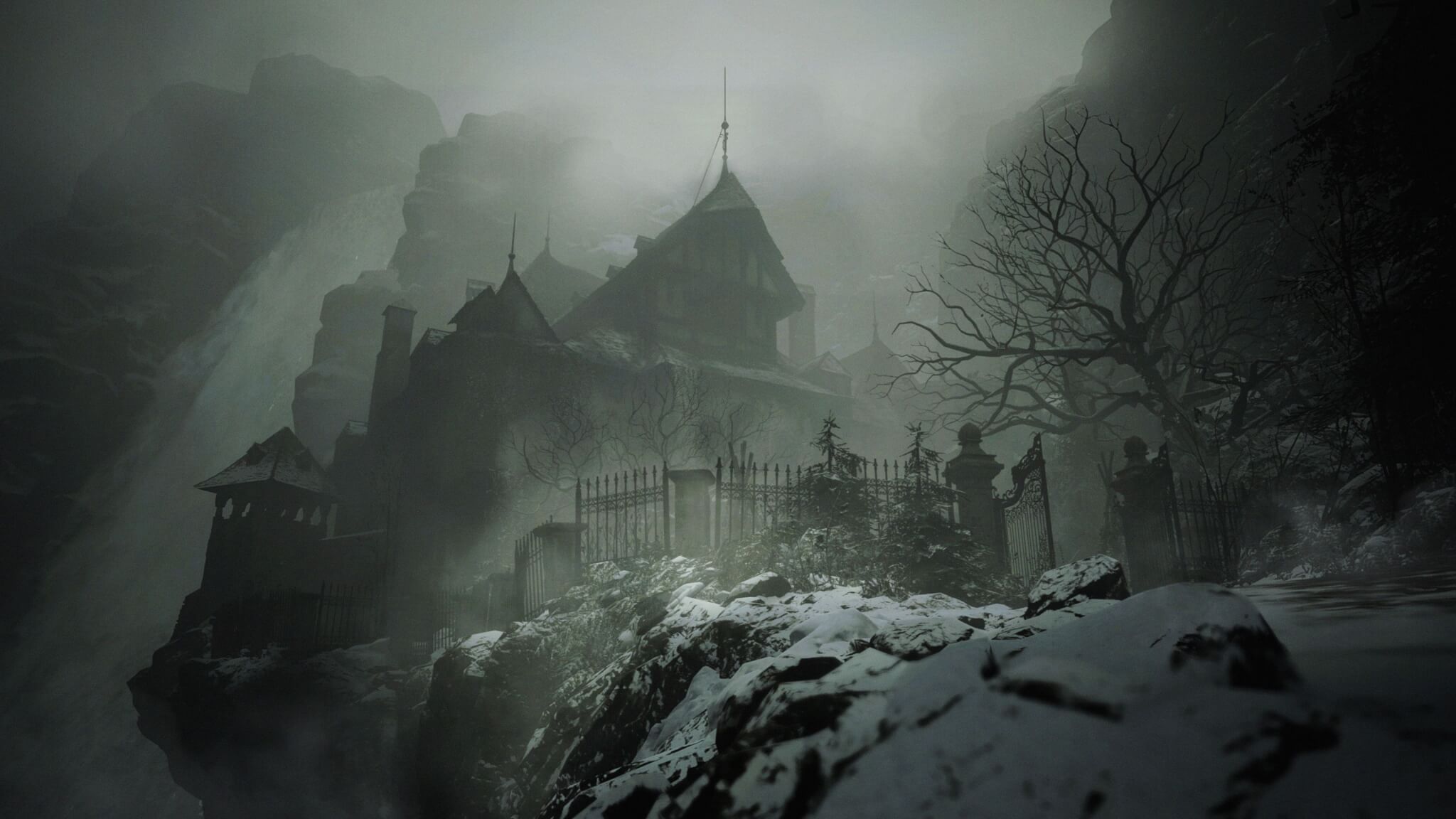 What if I dared to declare that the scariest experience any horror fan could endure this year comes from a video game? Capcom’s Resident Evil franchise has been spooking players for decades (since the late 90s), and 2021’s Resident Evil Village introduces a new horde of villains including Lycans, fleshy machine peoplebots, sexualized Amazonian winemakers (calm down, internet)—far more than biohazard zombies. It’s a rewarding campaign that’s drawn praise from franchise fans and copyright lawsuits from filmmakers (re: Frankenstein’s Army), with a sequence that’s become an infamous source of gothic terror as protagonist Ethan Winters attempts to reassemble his kidnapped daughter Rose. The scene in question? A gloomy and morbid estate known as House Beneviento, where the Cadou-possessed and mentally ill dollmaker Donna Beneviento resides with her porcelain puppet companion Angie.

Sparing all the backstory for those not interested in the title’s mythology, Ethan’s forced to investigate House Beneviento without any weapons or items due to a pitch-black turn of events. Donna Beneviento has gained the ability to excrete a hallucinatory substance that haunts Ethan as he explores the two-story manor. Memories of a murdered wife (Mia) and his abducted—now revealed to be sectioned in flasks—daughter (Rose) become the monsters that attack Ethan throughout a boss-level succession of puzzles. It’s gut-wrenching as Ethan’s intimate remembrances become taunts over radio waves and horrifying as Donna communicates through the squeaky, high-pitched cackle of a chattering Angie dolly. I often lament the Resident Evil movies that could have been if Paul W.S. Anderson adapted games based on their existing narratives and how the Capcom franchise is already so inherently cinematic—blueprints need no doctoring nor embellishment. Ethan’s descent into the traumatic nightmare that is House Beneviento transcends horror simulations, whether that be emotional torture, straightforward creature evasion, or the hide-and-seek that follows after Donna demands Ethan stay and play after avoiding the infantile wails of his fetal pursuer. Atmosphere and mood play an integral part in Resident Evil games, and Village does well to amplify dread in these signature milestone challenges. House Beneviento is a crowning achievement.

It’s a bit like a “Greatest Hits” compilation of horror cinema, as frights escalate with each completed task. A cliffside house with no visible owner is creepy enough, as Ethan wanders without protection (gimme back my shotgun) until discovering Donna’s workshop, littered with replacement limbs and a life-size mannequin of Mia on the table. You pull apart the Mia lookalike to dislodge a key, a wind-up mechanism, and other necessary clues that will eventually help Ethan return power to the elevator that’s currently inoperable. It’s Donna’s way of eating away at Ethan’s psyche from the start, which includes a basement room with a well straight out of The Ring. As a horror fan and player, my hands froze seeing the circular stone formation—I know what happens when people climb into wells in horror cinema, or worse, what ventures back out. Village does a remarkable job stopping me in my tracks, pausing because I know nothing good comes next, and yet, there’s no path but forward.

Once the required inventory objects are collected and proper doors are unlocked, Ethan returns to the workshop only for wooden Mia to have vanished from the room now soaked in bright crimson hues. Panic set in as I angled Ethan’s vision downward to glimpse a trail of blood leading back towards the elevator’s lobby. My first inclination presumed the faux Mia would now be lurking in the libraries and hallways along my retraced steps to “safety” because, duh. Ethan versus Ghastly Mia. Only a flashlight illuminates the darkened corridors, and sound design ensures players feel the loneliest sense of helplessness trapped in a madwoman’s dungeon. All the credit goes towards Village developers for House Beneviento because it’s such a maniacal appropriation of expectations that understands not only the haunted house architecture’s worth quivering hands around a controller, but the true core of emotional and corrosive fears. Here I am, inching Ethan past shadowy nooks, expecting this hollow-inside Mia to pop around any corner—but that isn’t what happens. First, a faint growl breaks the silence except for audibly sporadic children’s excitement and Ethan’s footsteps. Then the elongated turtle’s neck of this fetal abomination enters frame, wholly ready to devour Ethan like Snake Freddy in A Nightmare On Elm Street 3: Dream Warriors.

With the lights off and volume blasted, it’s a knee-buckling, run-for-your-life horror highlight. Cue a frantic escape as Ethan must traverse the basement area for a missing fuse while avoiding this summoned abomination that thuds and crawls with a slimy slug-like trail left behind. Players can hear a newborn’s hysterical sobs or joyous laughter as the creature rumbles closer; “DA-DA, DA-DA” forced through a tonal distorter like an air-raid horn. If you’re caught, Ethan’s view sees the oblong, snake-meets-tunnel mouth devouring his person from the feet to head. No fighting, only fleeing. It’s a relentless combination of unsettling noise effects and a perceivably unwinnable scenario that’s punctuated by monster design that would make John Carpenter blush. Oh yeah, and it’s a bastardization of Ethan’s parental paranoias now turned into the ultimate evil? Victory brings one final jolt as Ethan awaits his elevator chariot and Ba-Ba Nah-Nah comes thundering into the room, bashing against the steel grates as you wave goodbye.

All that and Donna still won’t let Ethan exit, so we play “Find The Angie” as the entire household above is now littered with dolls—who wield hidden weapons Puppet Master style if you fail to locate Angie quick enough. Where down below emphasizes ominous supernatural threats, unnerving lengths of isolation, and an outstanding prenatal aberration, Donna’s last-ditch effort to best Ethan is more Child’s Play. Donna’s chuckles through her vessel get louder as you race bedroom-to-closet trying to find Angie amidst the clutter of dollhouse compatriots. It takes three successful gotchas until you realize you’ve been stabbing Donna herself in the skull, not her porcelain miniature. It’s far more fundamental than the previous drooling demon, but a ticking clock and henchdolls with hidden blades reminiscent of Krampus in some ways—this entire level does so well damning innocence. I never found respite in House Beneviento, nor a chance to catch my breath. It’s a wonder why you’d ignore any of the elements above—indeed, not the first time Resident Evil has chilled players to their bones—in favor of manufactured blockbuster action. Don’t get me wrong; I’ll defend my trashy Resident Evil sequels to a degree. It becomes tricky when I fondly ponder how effortlessly a stretch like the masterful malevolence of House Beneviento can become such a celebration of horror and why studios wouldn’t simply translate that to screen. There is a possibility that one of the newer adaptations answers my question for the better or worse. Until then, I’ll happily find more horror in my Resident Evil playthroughs (well, maybe not Resident Evil 6) than watching Resident Evil: Afterlife on Netflix again.

As is, House Beneviento is all-timer level navigation throughout the history of horror video games. It’s an adrenaline rush, anxiety spiker, and compelling narrative devastator in pristine pixelization. Resident Evil Village may have its shortcomings—I find Heisenberg’s finale a bit exhausting—but House Beneviento is the stuff of legends. You can even develop a bit of sympathy reading into Donna’s loveless backstory and agoraphobic mutation under Mother Miranda, which only heaps on an added sting as you drive a pair of scissors through Angie’s snow-white veil. Not that we should lament the eradication of a reclusive lord who just unleashed a blasphemous babe generated from Ethan’s—our—memories, I guess. In another world? House Beneviento could be a much different place. In Village? It’s the closest entryway you’ll find into Hell, with Lady Beneviento playing the role of Reaper.