The 1974 version of Murder on the Orient Express is one of the strangest films I’ve ever seen. It’s an exceptionally orderly mess, like watching a child decide which toys to toss about their room and in which order to toss them. And it’s a monotonous, clunky collection of set pieces lifted more or less wholesale from Agatha Christie’s novel — this is fortuitous, as you couldn’t conceive of a simpler formula for such a gaudily lauded cast to act out its string of spotlight performances. Yet somehow Sidney Lumet’s adaptation is also the kind of movie you really owe it to yourself to watch: not because it’s so bad it’s good, but because of just how completely Murder on the Orient Express overlooks, overrides, defies, and otherwise ignores almost every expectation you might have for how a movie should function.

The plot, straightforward, is this. World-famous Belgian detective Hercule Poirot is returning from Istanbul to London via the titular train line. In what was then Yugoslavia and is now Croatia, the train is stopped by an impassable snowbank. Then, in the night, one of the passengers is murdered. Poirot, after interviewing all thirteen passengers in the victim’s train car, solves the murder. If that sounds easy enough, let me assure you that my fascination with Murder on the Orient Express comes from the sheer vigor with which it presents thirteen consecutive interrogations. That’s thirteen different stories: thirteen presentations of discrete information, a concatenation of alibis so dense and specific it may as well be another language. The first time I watched Murder on the Orient Express straight through, I fell asleep at four separate points. This isn’t a condemnation of the movie. As I think about it in hindsight, I’m reminded of my childhood’s thousand wintertime visits to family on the other side of the state. Put me in a heavy coat and then buckle me in the backseat of a car moving across an unbroken plain of crisp snow and dirty freeway snow, with the heater on full blast and the adults discussing adult things, and I will fall asleep. So it is with these characters. Without being allowed much interplay with one another — they interact with Poirot and almost no one else — their explanations for who they are and where they were and how they might have known the dead man stack up like hot air in a closed space. “Poirot will solve it,” you find yourself thinking, “and so I’ll just rest my eyes.”

And so we come to Poirot himself: the cause of all that vigor, the beating heart at the dozing body’s center. I knew Albert Finney was in this movie, and I saw his name in the opening credits. But it was about twenty minutes before I realized (is relief required, or can epiphanies be embarrassing?), Oh, Poirot is Finney. This performance goes far beyond good acting or transforming oneself to play a character, though Finney deserves credit for both. This goes past Susan Sontag’s campiest daydreams, headlong into bizarre new territory. Finney is barely recognizable even after you reconcile his presence with his character. Or maybe it’s that the two are irreconcilable. It’s not that his slicked hair, or his immaculately faffish mustache, or his slouched demeanor are too goofy to take seriously. Nor is it Poirot’s most noticeable feature: his neck, squashed down upon its shoulders like a turkey trying to avoid the knife. Nor is it even his Belgian accent, which sounds more than anything else like a sentient wink. It’s the audacity of combining all of these things for anything longer than sketch comedy. Albert Finney’s Hercule Poirot is Marlene Dietrich’s Cockney disguise in Witness for the Prosecution or Meryl Streep’s rabbi in Angels in America, but for the length of an entire movie. Part of the joy of a world-famous actor disguised as an unusual character is the blink-and-you’ll-miss-it nature of the trick. Murder on the Orient Express takes this conceit and stretches it so far past “by contrast” I’m tempted to learn German just to find out if they’ve got a word for what comes after that.

Because Hercule Poirot isn’t just a character in this movie, whose cast boasted seventeen Academy Award nominations and six wins by the conclusion of the 1975 ceremony. He is the character. After the murder, everything that happens in Murder on the Orient Express happens because Poirot sets it in motion. He combs the victim’s room for clues while singing a song about it (“Has it occurred to you that / there are too many clu-ues / in this ro-o-m”). He organizes the interrogations. He goads the suspects into revealing more than they want to, think they are, or realize they know. He tricks James Bond into punching a train line employee. And then, at the denouement, Finney gets a collection of some of the most decorated actors on the planet to sit still and shut up for a full half-hour, whirling and gesticulating about the dining car like an outtake from The Music Man as he unravels the entire intricate plot. 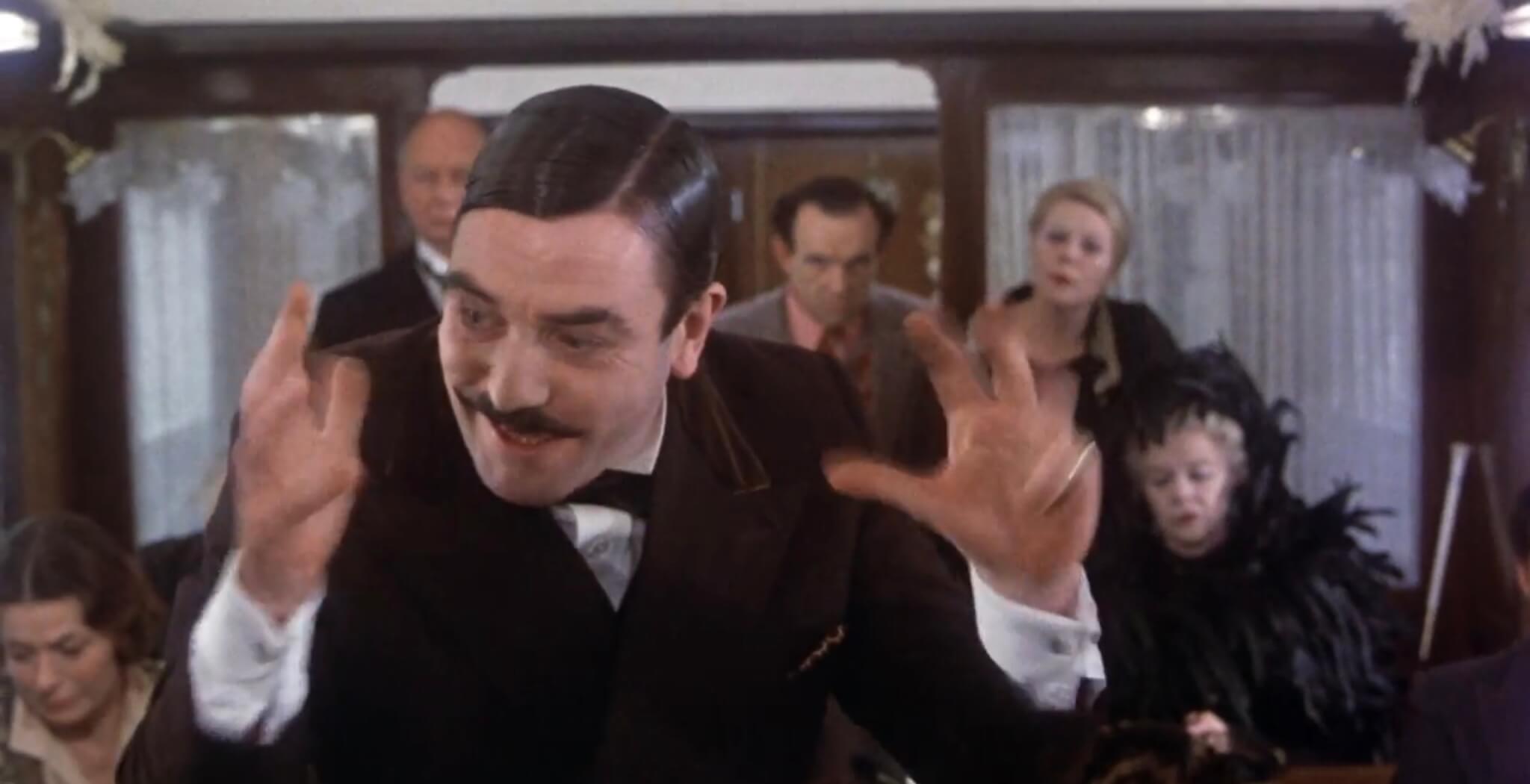 Roger Ebert, praising Finney’s performance upon Murder on the Orient Express‘s release, called him “the most impressive” actor in the cast, adding that he “scurries up and down the train like a paranoid crab.” Ebert also says that Finney is as impressive as he is “largely because we can never for a moment forget that he is Finney.” I think that pretty much gets to the heart of it. There are plenty of reasons I can’t get lost in this movie, and the biggest one is I can’t for a second believe that Albert Finney is not telling a joke at the audience’s expense. But I’m also not bothered by my inability to forget that I’m watching a movie, because I can’t believe what I’m watching, I can’t believe this movie got made. The fact that it exists in the world is a triumph of strangeness, as singular and grand as the movie itself. I should restate one thing. Murder on the Orient Express is decidedly not so bad it’s good. It’s not The Room; it’s not Manos: The Hands of Fate; it’s not Gigli. And it isn’t the cinematic equivalent of watching a train wreck. It’s like watching a train being built. Except you’ve just arrived on a foreign planet, and you’re tired and you’re frizzy, and you want food and sleep but you don’t know which to get first or how to get either, and after debarking from the still-steaming interstellar travel vehicle you instead just stand there, staring across a spaceport so wide open and vast you can see this planet’s curvature on its eerily familiar horizon, as a crew of humanoid beings engages in the methodical and rhythmic construction of what looks to be a large, metal puzzle box of some kind, their efforts at first illuminated by the setting sun and then by floodlights so precise you can’t see anything beyond them in this planet’s dense evening dark. And then at last, after losing all track of time and self in their steady clanging, clonging, clanging, clunking, clanging, something about the construction’s shape or direction or framework or assemblage or essence simply clicks into place for you too, and you find yourself saying “Hey. That’s a train.”

Tales From the Crypt