My wife and I are big fans of the Law & Order franchise.

So, we were extra excited when we heard about a new installment in the Dick Wolf money printing franchise… Law & Order: Organized Crime. Not only that, but the show will feature the highly anticipated return of Christopher Meloni as one Elliot Stabler.

The biggest complaint I’ve heard about the show, both from reading about it online and from my own household, is that it doesn’t FEEL like a Law & Order show. And I agree, it doesn’t. There’s a moment where Stabler goes to visit a hacker friend in order to break into a suspect’s phone that feels much more like CSI than L&O.

But I think that’s okay. It’s a new show and it should have a new feel. Maybe they’ll find their groove. Maybe they’re trying out something new. But give it a chance. In Dick Wolf we trust.

Of course, you know they didn’t JUST give us the pilot for Organized Crime. No, they made it the crossover event of the pandemic by having a two-hour Stabler-athon starting first with his appearance in Law & Order: SVU Season 22 (22!?) Episode 9: “The Prodigal Son Returns.” As such, one can’t talk about Organized Crime without first taking a look at the preceding episode of SVU. We start off with Olivia Benson (Mariska Hargitay) going on a car-bombing call. The victim of which is none other than Kathy Stabler, Elliot’s wife.

It’s there that Olivia Benson and Elliot Stabler reunite. Together again.

Ready to take down crooks just like old times. And just like old times, Stabler is as unhinged as ever. He was never what one would call “chill” before, but now that his wife, the mother of his five children, has been the victim of a car bombing, he’s the opposite of chill. He’s hot. He’s red hot and looking to find answers the only way he knows how… threatening to beat the shit out of a suspect.

This is Stabler’s thing. He’s often rolling up his sleeves in the interrogation room as a not too subtle threat. Once those sleeves start rolling, there’s pain coming. Which is what almost happens when a guy is arrested for burning down two cop cars during some nearby protests. Stabler thinks this guy’s good for the bombing of his wife as well and so… cue the sleeves. There’s an important piece of information here, hidden in the macho testosterone-drenched interrogation scene. The suspect tells Stabler, “Instead of asking who, you should be asking why.” I’ve a feeling this is prescient information. But Stabler’s too keyed into his rage to listen. He even goes so far as to charge the guy before Olivia Benson steps in and literally body blocks him.

(Sidenote: I can’t help but wonder if this is the right time for Elliot Stabler to return to television. Does America really want to see a hothead cop threaten to pummel people? Is a police officer who breaks the rules with wild abandon really the hero we need on network TV? Only time will tell if Organized Crime becomes the next SVU, or if it becomes the next Law & Order: LA.)

Pretty soon, crash carts start flying and nurses rush into Kathy’s room as she goes into cardiac arrest. Stabler and Benson are forced to stay outside, impotent to help her.

Among the theories flying about how it happened, one of those theories is that the bombing was really meant for Elliot. Benson can’t help but wonder aloud… “Maybe the question isn’t who paid [the bomber], but why.”

Just then, we get some bad news about Kathy.

With Stabler’s wife securely in the refrigerator, it’s time to get this here crime a little more organized.

Exciting to hear a new intro after all these years. Let’s get into it!

We open on Stabler… jeopardizing a case by breaking the rules. He left all his fucks in the hospital room where his wife died. He’s looking for information about who gave the order to blow her up. (Conveniently missing the “why” question repeatedly posed in the previous episode.)

He badges his way into a courthouse jail cell and threatens a couple mobsters from the Iron Triangle (Russian, Italian, and Albanian mob) and is properly ejected from the building after the other cops get wise to what he’s doing there. Stabler leaves, but not before giving the mobsters a throat slitting gesture on his way out.

Then we go into the new opening credits song and friends, it slaps. It’s edgy, with an international feel. And when the familiar Law & Order tunes kick in… man, good stuff.

Stabler meets with Benson so she can hand over her case files since SVU was kicked off the case in the previous episode. Now, it’s this newfangled organized crime unit that’s taking over the case. Stabler hands Benson a letter, a letter which he wrote in lieu of giving a speech at an awards ceremony for Olivia that was supposed to take place prior to Kathy’s death. Is it an apology letter? A love letter? We’ll have to wait and see.

Stabler knocks around the city finding information and busting down warehouse doors looking for suspects. What he comes up with is a link between the person who killed his wife and the big time gangster, Manfredi Sinatra (Chazz Palminteri). Stabler sets up a meet with the big man by going through a lawyer friend of Sinatra’s who’s currently doing time upstate.

Then, there’s the funeral. Benson is there to pay her respects. We see here that Elliot’s barely holding his family together with both hands as they grapple with their huge loss. Now is a time for healing. For togetherness. To be there for your family. 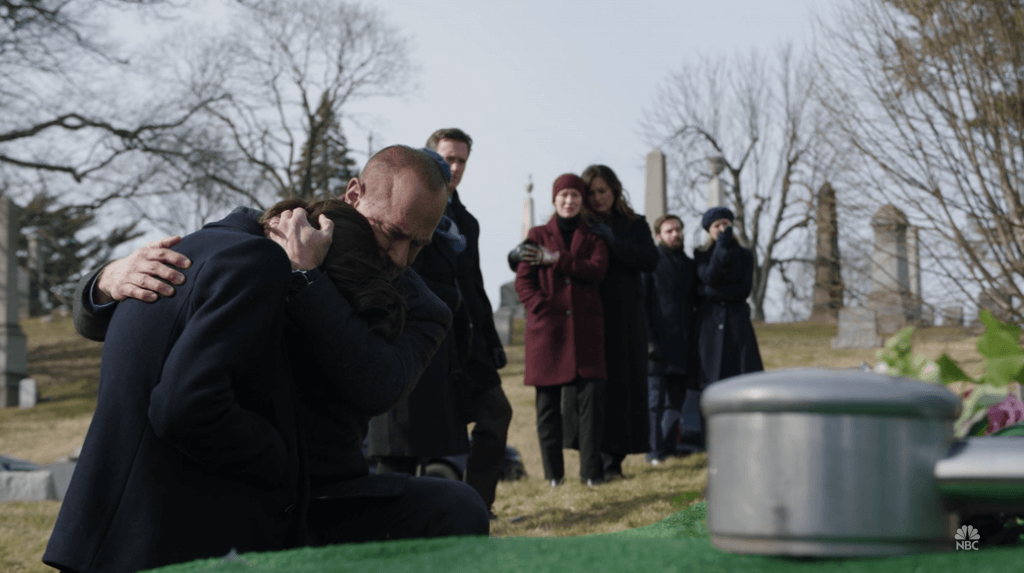 Which is why Stabler cuts out on family dinner and goes to follow up on the case instead. He meets with Sinatra and grills him about the evidence found in his warehouse. Sinatra gives his best impression of Unfrozen Caveman Lawyer. “What do I know about crime… I’m just a building contractor.”

This building contractor then goes to see his son, one Richard Wheatley (Dylan McDermott). (It’s explained that the reason why Richard has a different last name is he took the last name of his first wife, a Black woman, because he knew it would make his racist dad furious.)

Once there, he asks his son WTF about Stabler coming to see him and the allegations he made. He wants to know how the hell evidence of Kathy’s bombing was found in one of his warehouses. Richard basically tells his father to get bent after Sinatra calls Richard’s adopted son a “flat-nosed thug.”

Back at the precinct, good news! “Upstairs” is giving them the task force to look into Sinatra and his son. Bad news! Elliot’s not in charge. Desperate to get on the case, he makes his plea to the woman in charge of the task force, Ayanna Bell, to allow him to come aboard. She agrees… reluctantly. Elliot’s then brought up to speed on who Sinatra’s son, Richard Wheatley, really is. He claims to be a legit businessman but he’s actually one of the world’s biggest distributors of illegal narcotics.

Big fish to say the least.

Stabler goes to talk to Wheatley’s ex-wife, Angela Wheatley (Tamara Taylor), when a gunman fires on them during a motorcycle drive-by. Stabler saves Angela’s life before trying to get a shot off at the fleeing perpetrators, only to lose them in traffic.

The next day, Elliot’s in the office for his first day on the new task force. He’s told by Bell, under no uncertain terms, that this case is about Wheatley, NOT Stabler’s wife. There will be some crossover, but Stabler needs to keep his eye on the ball. He promises he will.

He gets an encrypted message to meet him at the Wonder Wheel at Coney Island. It’s from Sinatra. He waits by the Wonder Wheel and when he hears footsteps behind him, he turns, expecting to see Stabler. Instead, it’s his son.

They have a conversation about how it’s a different world now. (A theme running through this episode, both in Stabler’s struggle to not dangle suspects from the balcony by their feet, and in the generation gap between how gangsters ruled things then and now.)

Sinatra tries to walk back some of the horribly racist things he said about his own grandchildren in the past, but Richard can’t abide that kind of talk. And so by the time Stabler shows up, he finds Sinatra alone on the Ferris wheel with a bullet in his head. So, Stabler calls the murder in and tells his superiors exactly what he was doing there, doing everything by the book.

No, wait a second, hang on. Let me check my notes. It’s hard to read my own handwriting sometimes. Ah, yes, here it is. He steals Sinatra’s phone and opens his dead eyes so he can use the facial recognition to gain access. He then goes back to his place, panicked and sweaty, only to run into Benson.

She read his note and wants to talk about it. But Stabler doesn’t have time. He’s already in too deep, doing things behind people’s backs. Keeping secrets, telling lies.

He makes his exit, leaving Benson in the lurch. Just like he did all those years ago when he left the force without telling her.

Guess he hasn’t changed much after all.