If there’s one thing to be learned from watching historical dramas about women, it’s that being a woman sucked. There’s no escaping the fact that marriage was a woman’s only choice, and that even the wealthiest women had no real agency. The Duchess, starring Keira Knightley, isn’t a frothy Bridgerton-esque romp, nor is it a civilized Austen Regency romance. As filled with curtseys and formal dining tables and ballgowns as it is, it isn’t a romantic fantasy. Rather, it tells the story of a real woman, Georgiana Cavendish, Duchess of Devonshire…and because it’s based on truth, it hits much harder than period pieces usually do. Georgiana, the actual person, was a very influential woman in both eighteenth century politics and society. She was a looker and started fashion trends like that of wearing birds and small structures in your hair (which I say we don’t do enough of today). In short, she was an Influencer. She was also possibly an alcoholic and a compulsive gambler, frequently in debt. While all of that is flirted with–or at least hinted at–in The Duchess, the film pays most of its attention to her marriage. This is typical of how a woman’s story is told, unfortunately. Think about the life story of Georgiana’s four-times-great-niece, Lady Diana Spencer, another teenager whose influence and rosy outlook was ultimately overshadowed by her marriage.

There are several movies that tell a story along these lines–a hopeful young girl is married off to a man she barely knows, one who turns out to view her as a broodmare and nothing more. In some cases (like this one) she’s unable to have a boy, which makes her a failure. Girls don’t count, and are considered to be worthless, almost an insult to their fathers. The husbands–unfaithful, all–range from murderous, like Henry VIII, to just blandly terrible, like the Duke of Devonshire in The Duchess.

Ralph Fiennes can play monsters. He came to prominence portraying one in Schindler’s List, in fact. But he doesn’t play the Duke as a monster–quite the opposite. Fiennes’s duke seems genuinely sad that his wife is miserable because he raped her, made her best friend his mistress, threatened to keep her from seeing her children, and forced her to give up her baby. He doesn’t understand why she can’t just do as she’s told. He points out that his “harsh” treatment, as he calls it, always has a purpose. He’s not being abusive just to be abusive–by his logic, that’s all that should matter. He’s in charge, he gets to do whatever makes him happy, and she’s thwarting him. That’s why he’s harsh.

It’s chilling. The perfect distillation of male privilege, in a society that revolved around privilege. There are moments when we almost sympathize with the Duke, because the entire world takes his side–that men can sleep around but women can’t, that boys are all-important but girls are meaningless. That men can rape their wives while every servant in the manor house ignores her screams. In a culture so enamored with maleness, even Georgiana’s mother and her only friend, Lady Bess, sympathize with the duke–the epitome of Stockholm Syndrome. It’s Georgiana who’s the weird one, clearly. Why can’t she just behave? Who does she think she is, expecting equal treatment with her husband? Keira Knightley’s Georgiana is high-spirited, comfortable in her own skin, curious about the world…and beaten down to the point that it’s astonishing she didn’t simply refuse to get out of bed for the rest of her life. There’s no happy ending. There’s barely any happiness at all–her confidante becomes her sister-wife, against Georgiana’s will. She finally finds a man who actually loves her, only to be forced by the Duke to choose between him and her children. Her own mother, having put her into this awful marriage, consistently enforces all the rules of the patriarchy that is destroying poor Georgiana.

In the end, utterly trapped, she’s left to make the best of her misery, to raise her daughters in this world that will ruin them. And that’s it. All the lavish production values–the excellent acting, incredible sets, lush cinematography, Oscar-winning costume design, beautiful score–do nothing to soften the blow. The Duke gets what he wants, and The Duchess gets to do what he wants. 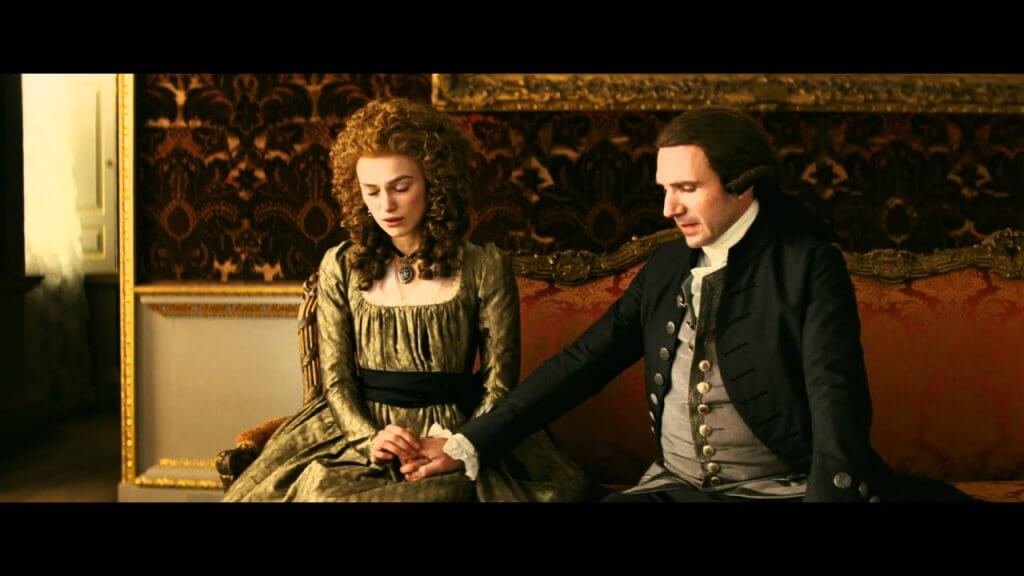 It’s enough to make you long for the silly sexiness of Bridgerton, a period piece that allows us to pretend that the past wasn’t brutal for women–even wealthy women–and that the present isn’t still brutal in a lot of ways for a lot of women. But I, for one, am glad that somebody made a fancy, award-winning historical drama about the truth beneath the corsets.

Georgiana Cavendish deserved that much, at least.