And gave her mother forty whacks

When she saw what she had done

She gave her father forty-one

Fall River, Massachusetts was the hometown to one of the most notorious murders turned nursery rhymes, that of Lizzie Borden. Though Borden was eventually acquitted of the charges brought against her, that little ditty would live on for generations, sending chills down spines and conjuring up images of rabid, bloody axe murderers.

However, since then, a new set of murders has taken center stage in Fall River. And according to a detective who investigated the crimes, “Lizzie Borden has nothing on the Fall River cult murders.”

Fall River on Epix is a true crime docuseries that has all the hallmarks of a culturally iconic murder. It’s got gruesome deaths, Satan worshippers, decapitations… the only thing missing is a clever rhyme.

A woman was found under bleachers

Her body was bruised, beaten, abused

And can’t be ID’d by her features

In the fall of 1979, Fall River was a hotbed of sex work. Women from Providence and the surrounding areas all flocked to Fall River. There were so many working girls roaming the streets, it would cause a traffic jam on Friday and Saturday nights. All this was happening a block and a half from the police station. Some cops even picked the girls up for services.

One such sex worker who made her living on the streets of Fall River was an as-yet-unidentified 17-year-old woman. Her body was found under the bleachers of Diman Vocational High School. Among other things too horrific to repeat, her head had been crushed with a rock.

After a composite drawing was circulated of the victim, she was identified as Doreen Levesque. The cops found out that when Doreen came to Fall River, she met a man named Carl Drew. People claimed Satan ruled the streets of Fall River. And when asked who Satan was, all fingers pointed to Carl. 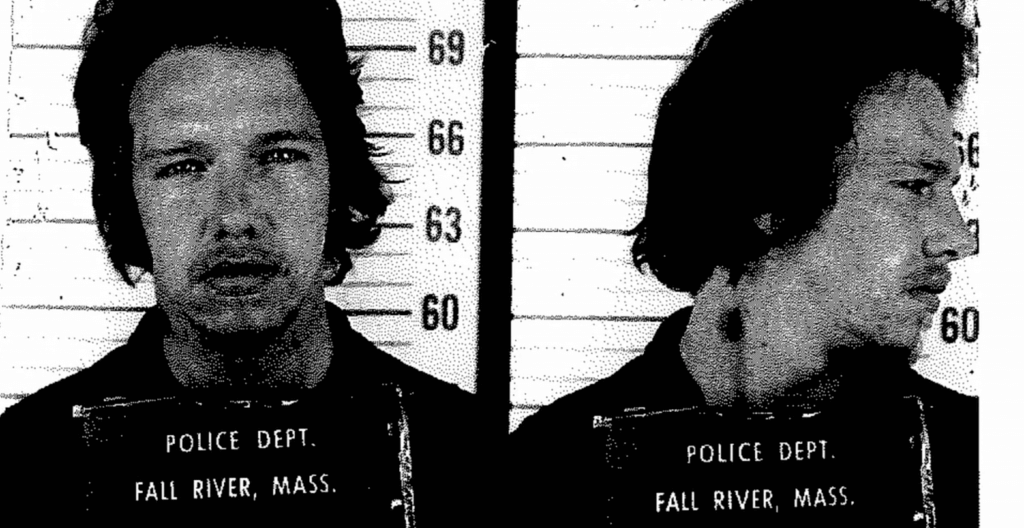 Her head was crushed and blood was spilled

The man Carl Drew was someone she knew

But “Satan” was how he was billed

Carl Drew came to Fall River via New Hampshire. He came from an abusive family, sometimes being beaten into unconsciousness by his father. When he turned 14, Carl left and lived on the streets. He was described as a violent thug. After getting six years in prison for a convenience store robbery, Carl took to pimping. His reputation as a hard man led most people to give him a wide berth.

Around this time, a woman named Robin Murphy came to Fall River to try her hand at the pimp game. Though they hated each other, Carl and Robin worked together. Between the two of them they controlled most of the sex work in the area and actively discouraged others from doing the same.

Robin herself had a rough upbringing including allegations of sexual assault. Violence was part of her life from an early age and so she took that violence to the streets, getting in physical altercations with anyone who crossed her path. Men twice her size were afraid of her.

Doreen Levesque worked two blocks away. Carl and Robin reportedly both warned Doreen to stay off the streets because she was cutting into their money. She didn’t listen and kept working her corner.

Caught in the crossfire of Carl, Robin, and Doreen was a woman named Karen Marsden. Friends tried to talk her out of working the streets, but it seemed to fall on deaf ears. Karen eventually struck up a relationship with Robin Murphy and the two became lovers. 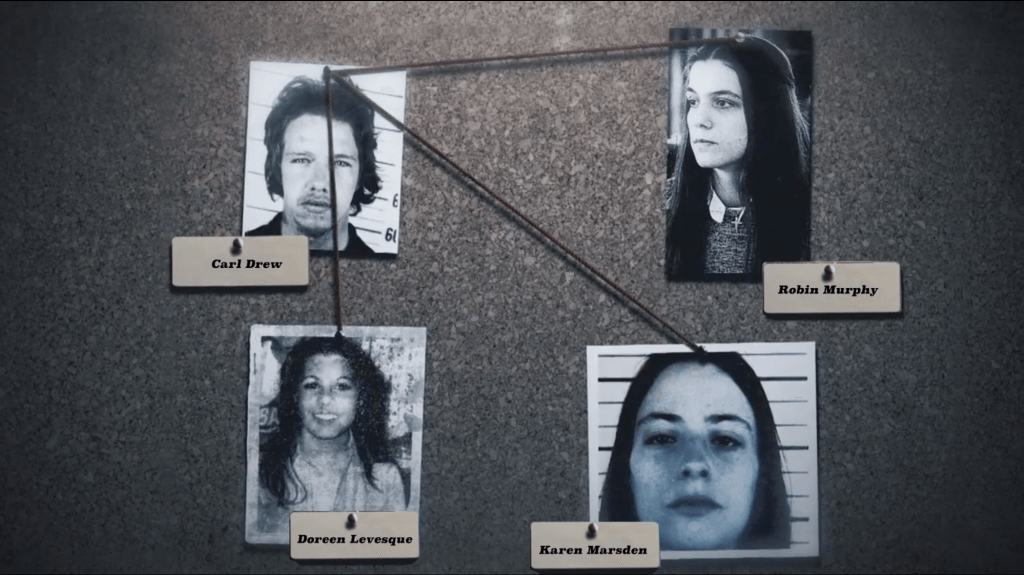 One night, Karen told the father of her child that there was a body under the Diman High School bleachers, claiming Carl Drew beat her head in with a rock. Karen was terrified that Carl would end up killing her as well. Carl even threatened to “party” with Karen’s two-year-old son if she ever left.

Karen believed Carl Drew to be Satan himself.

In the forest, a group of adults

Who gathered out there to exult

The claims at the time, they’re out doing crimes

What we have here, friends, is a cult

As police continued to investigate, they heard the words “Satan” and “cult” for the first time in Fall River. Karen, along with other women, claimed Carl would take them out to the woods and worship Satan. Upside down crosses and animals with the blood drained out of them were said to have been found in the forest.

Karen had wanted to get away from Carl and “Satan” altogether. Problem was, she was a witness to Doreen’s murder and Carl was afraid Karen might go to the cops. The police offered to put Karen in protective custody after Carl threatened to kill her baby. Karen refused. She wanted to see a priest. The cops dropped her off at the local church and left.

That was the last time anyone saw her alive.

Robin Murphy incriminated herself on a phone call to a friend, saying she participated in the Karen Marsden murder. A phone call the police just happened to be listening in on. This led to her arrest. Robin agreed to cooperate in order to cut a deal. Robin stated that Carl had forced these women to worship Satan as a way to control them and that she was forced into it as well.

Were blamed on blood spilling pacts

They said “Let’s all panic, this crime is satanic”

With little regard for the facts

From the 1980s until about 1995, according to author Seth Andrews, Satanic Panic was in full effect. People were kicking over every rock, looking for the devil. And when all you have is a hammer, everything looks like a nail.

Back then, there were people who thought, “80 percent of all cartoons deal directly with the occult” and that by playing with the toys, children were imagining having these same occult powers, thus indoctrinating the children into these satanic cults.

But then something else started happening. Cases across the country that were originally brought about due to Satanic Panic were starting to fall apart because they were fundamentally built on myths and lies.

Like a lot of incarcerated people, Carl Drew claimed his innocence. The difference between Carl and a lot of other people was that Carl had an alibi for both murders. The night Doreen Levesque was killed, Carl was at a relative’s wedding and he had pictures to prove it. The night of Karen Marsden’s murder, Carl had been drinking at a bar with several people who could corroborate. So, what happened?

In short, the photos of the wedding were suppressed by the prosecution and Carl had a “grossly inexperienced attorney defending him.” His lawyer had never tried a murder case before (or since).

Furthermore, Carl claims the whole Satan-worshipping thing was made up. Robin herself later came out and said she gave false testimony and was coached. Despite all this, Carl Drew has remained in prison for the last 41 years.

Carl was arrested for murders completed

But the prosecution against him proceeded

This is wild to me. The prosecution is allowed to bring up a murder, for which there has been no trial, and use it as motivation for an entirely separate murder case. It’s submitted as fact that Carl killed Doreen Levesque with no evidence and no due process.

In addition, the prosecution had what it perceived to be the smoking gun: the testimony of a woman who claimed to be Carl’s girlfriend. The day after Karen Marsden was murdered, Carl gave this woman a ring that was later identified as belonging to Karen. The prosecution claimed that the ring placed Carl at the scene of the homicide.

The jury was out for a short time before returning a guilty verdict.

The state believes they were just

Arresting Carl, a must

But as the truth comes out of the witnesses mouths

The state’s story’s just not holding up

That’s when Paul Carey, a former police sergeant turned private investigator, enters the story. He believed Carl Drew to be innocent. First, he contacted the prosecution’s witnesses, Carol Fletcher and Lea Johnson. Fletcher was reportedly there the night Karen Marsden was killed and Johnson was the one who wound up with Karen’s ring.

He found Lea Johnson first, who immediately said she was coerced and coached to give her testimony incriminating Carl. She was working the streets when she got busted by the cops and they “pinned her in” by threatening her with a long prison sentence if she didn’t lie on the stand. When asked who told her that, she dared not elaborate.

Upon locating Carol Fletcher, she also admits her trial testimony was false. She claims Karen’s murder took place, not in the woods, but on the roof of Harvard Terrace, a nearby apartment complex. Not only that, but she states Carl Drew wasn’t even there. Who was there? It’s said every dog has its day

With people’s lives she did play

Robin, she yells, “I’ve got stories to tell”

Let’s see what she has to say

In 2004, Robin came up for parole. She admitted to the parole board that she gave false testimony against Carl Drew but denied having killed anyone herself. Despite this confession of perjury, Robin Murphy was granted parole. But then, in 2011, Robin got into a relationship with another felon, which violated her parole. She went back to prison and remains there as of the time of this writing.

Alas, but the story’s not over yet. As episode two wraps up, we see microphones and audio devices being set up.

Robin’s about to go on the record.

To see what happens next, tune into Fall River on Epix.