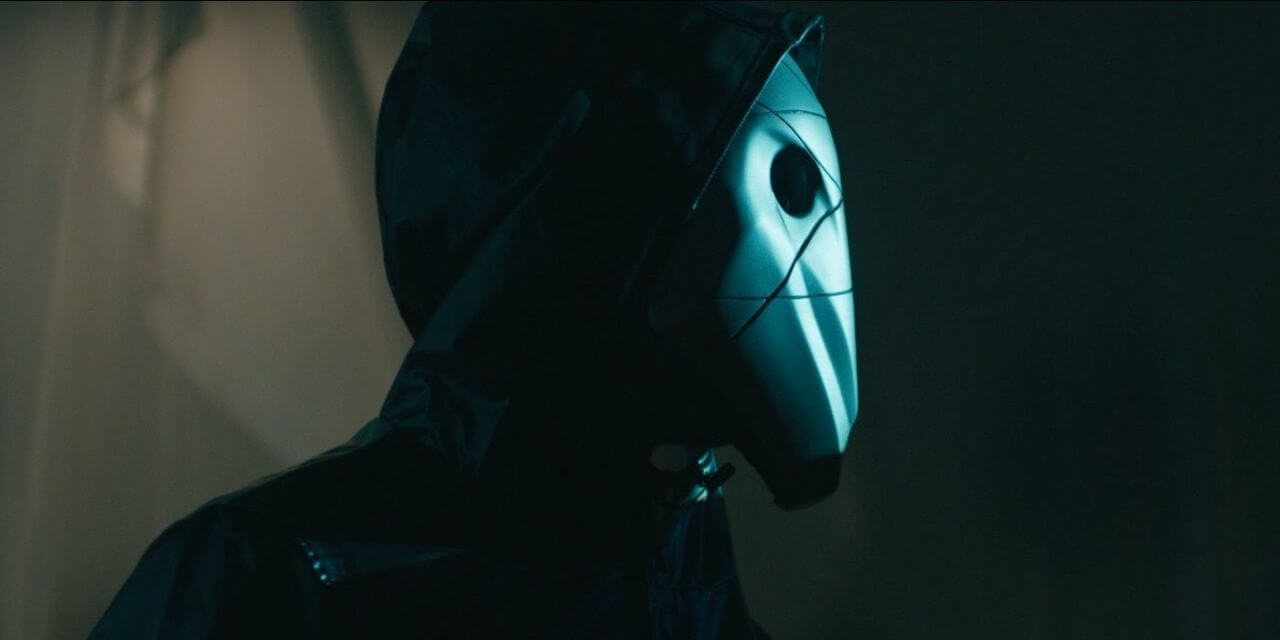 Jacob Johnston’s Dreamcatcher positions itself at the intersection of Shakespearian dramatization, pulsating EDM bass thumps, and self-hating slasher boundaries. It’s a struggle to parse emblematic and important trauma infliction themes from an execution that gets lost in dizzying ambitions that become a numbing trance. Between the egomaniacal talent agent using Mitch McConnell’s name as a gauge for vileness, the drug-fueled dreamscapes that are psychotropic visual overloads, and the narcissistic, cannibalistic entertainment industry archetypes? Johnston manages an ode to mental health that’s provocative in spurts, but continually overwrites his film’s moral assertions by shape-shifting subgenre influences scene by scene. Intentions are apparent, but execution mirrors a bad trip.

On the eve of Cataclysm, an underground electronic music festival, Pierce (Niki Koss) receives the gift of almost-impossible-to-obtain tickets from sister Ivy (Elizabeth Posey). Friendzoned Jake (Zachary Gordon) sighs in relief because that means he escapes another Halloween movie night—but immediately becomes snippy over the thought of Pierce mingling with other loverboys in public. It’s at Cataclysm where Pierce meets DJ Dreamcatcher (Travis Burns), ingests a peyote-adjacent hallucinogen, then envisions an alternate purgatory where friends and family recite verbal assaults that have caused lasting unspoken damage. When Pierce returns to reality, those who’ve just been demonized burst through DJ Dreamcatcher’s door, and that’s when everyone’s night goes from offbeat to incomprehensibly worse.

As iffy as the white-boy Dylan scenario—aka DJ Dreamcatcher—explaining Native American mysticism and folklore sounds, initial conceptualization provokes an “Adult Disneyland” vibe where no-frills insidiousness can thrive. The film’s hooded villain stalks an abandoned warehouse filled with concrete-shaking electronica where synthetic potency clouds inhibitions. Victims shriek, perky crowds drown out the anguish, and heads cave under the thrust of a bootheel. Where Dreamcatcher begins, with either an imposter or a psychopath headlining act murdering pleasure seekers, is a marriage of aesthetic to energy as lasers hypnotize and amplifiers bolster thunderous sound design. The problem? A swift swerve that cannot sustain the messiness of Johnston’s screenplay.

Without the inviting aroma of industrial warehouse asbestos and taste of acid-laced crowd sweat, we’re left with wholly despicable characters who are manufactured to be hated. Be that Jake’s constant slut-shaming and aggro “protection” as a jealous, never-gonna-happen lonely heart or Pierce’s problematic behavior when we’re trying to muster sympathy. Hunter (Blaine Kern III) pines over Pierce as he’s mid-foreplay with his current girlfriend Raye (Olivia Sui). Then, Hunter drags Raye to Cataclysm so the playboy can blatantly hit on Pierce in front of future lawyer Raye, who then becomes her own drunken, spiteful Insta-popularity chaser. Dialogue is like an Olympic competition where contestants win by spewing the most obnoxious, dislikable variation of their personality template, except there’s no winner. I understand Dreamcatcher is a commentary on emotional abuse, the ripple-waves of trauma. Still, Johnston undercuts his points by molding examples around repulsive skeletal figures which are impossible to connect with, thus rendering any empathy invalid. We enjoy watching these harmful, impulsively dismissive, flippantly damaging byproducts of selfishness meet terrible fates and stop caring about the actions that seal their fates.

“No one has the power to measure someone’s pain.” Emrhys Cooper, as Ivy’s support-rock, punches a few vulnerable lines bleeding with sincerity. Solitary, one-off proverbs that seem out of place in an otherwise tangle of unfulfilled ideas hellbent on condemning Los Angeles fakeness without knowing how to navigate the complexities in motion.

I cannot divulge choice narrative ambitiousness given their spoiler quality, but understand, Dreamcatcher is a massive undertaking of genre hybridization that fails almost every dimension. It’s repetitive and flees its prime locational asset well before house lights kill the party vibe as a slasher. As a whodunnit? There’s rarely any question about the deceptions and motivations behind a greyscale mask that looks ripped from a Martin Garrix music video. Johnston emphasizes male navel-gazing that subverts typical horror leers (lots of shower-slash-bathroom shots) and satirizes familiar gore-flick tropes (yelling “Hello?”), but victories are sparse. More often—as a result of his degenerative character outlines—Johnston’s production suffers from satire that seeps into his representation of trauma itself. Jake becomes a parody of fragile, unchecked masculinity in romantic situations, therefore rendering his cringe-worthy attitudes and scathing retorts toward Pierce inept when they should be horrifying. Johnston recalls Faust and Macbeth as influences but gravely undervalues the depths in narrative consciousness each stage works possess. Dreamcatcher can’t even suss its own linear desires, let alone challenge icons of the quill. Yikes.

Did I snort when Adrienne Wilkinson’s slit-your-throat mastermind quips lines like “I’m not the devil, I’m an agent,” as the only exceptionally aware performance in this entire ensemble? Wilkinson saves multiple almost-disastrous conversations. Did I laugh when Lou Ferrigno Jr.’s manager appears for a sole, forced-in entrance that highlights the film’s overall insufficient storytelling methods? For the wrong reason. Did I find the collective of disassociated millennial cutouts a wretched horde that, by becoming the worst of satirized impulses, exists as heinous caricature with less justification by the millisecond? Once Dreamcatcher’s climax drops its bombshell, we’re left wondering what all the bloodshed (guts that look like chopped liver), ugliness, and weaponized toxicity means beyond how everyone—introspectively or outwardly—is to blame. That, with a confounded, dazed shrug, is where I’ll exit.

George A. Romero’s Diary of the Dead 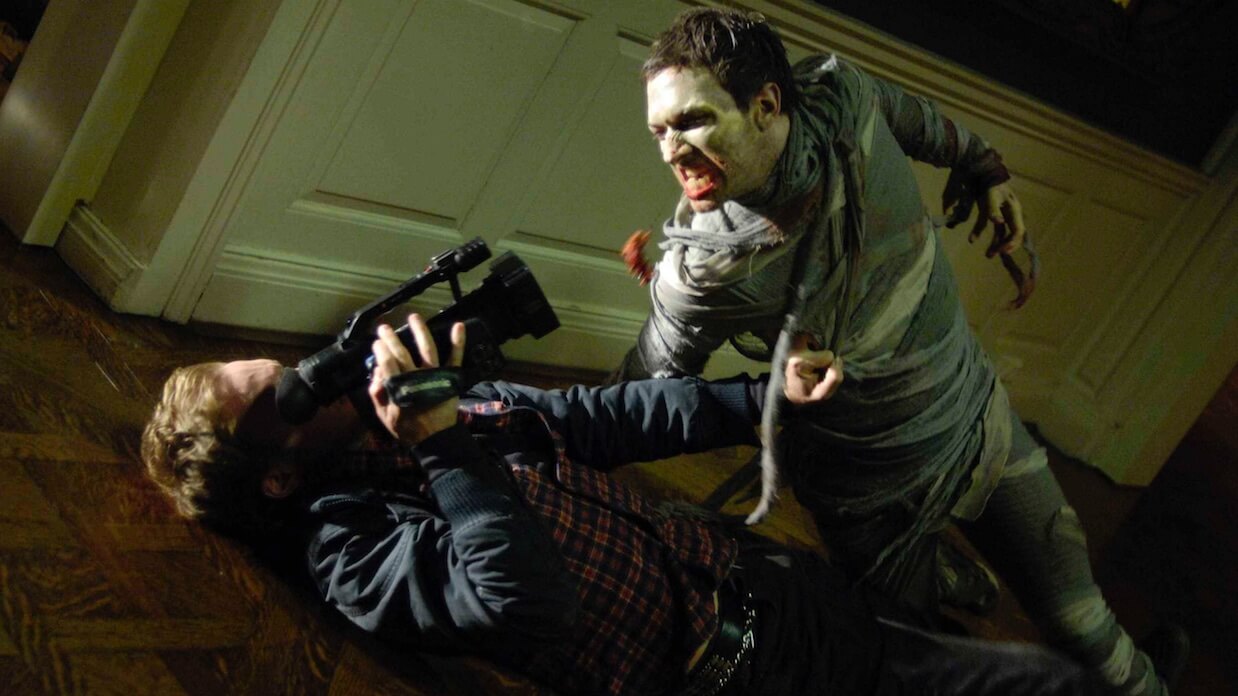 The Vampires of Zanzibar