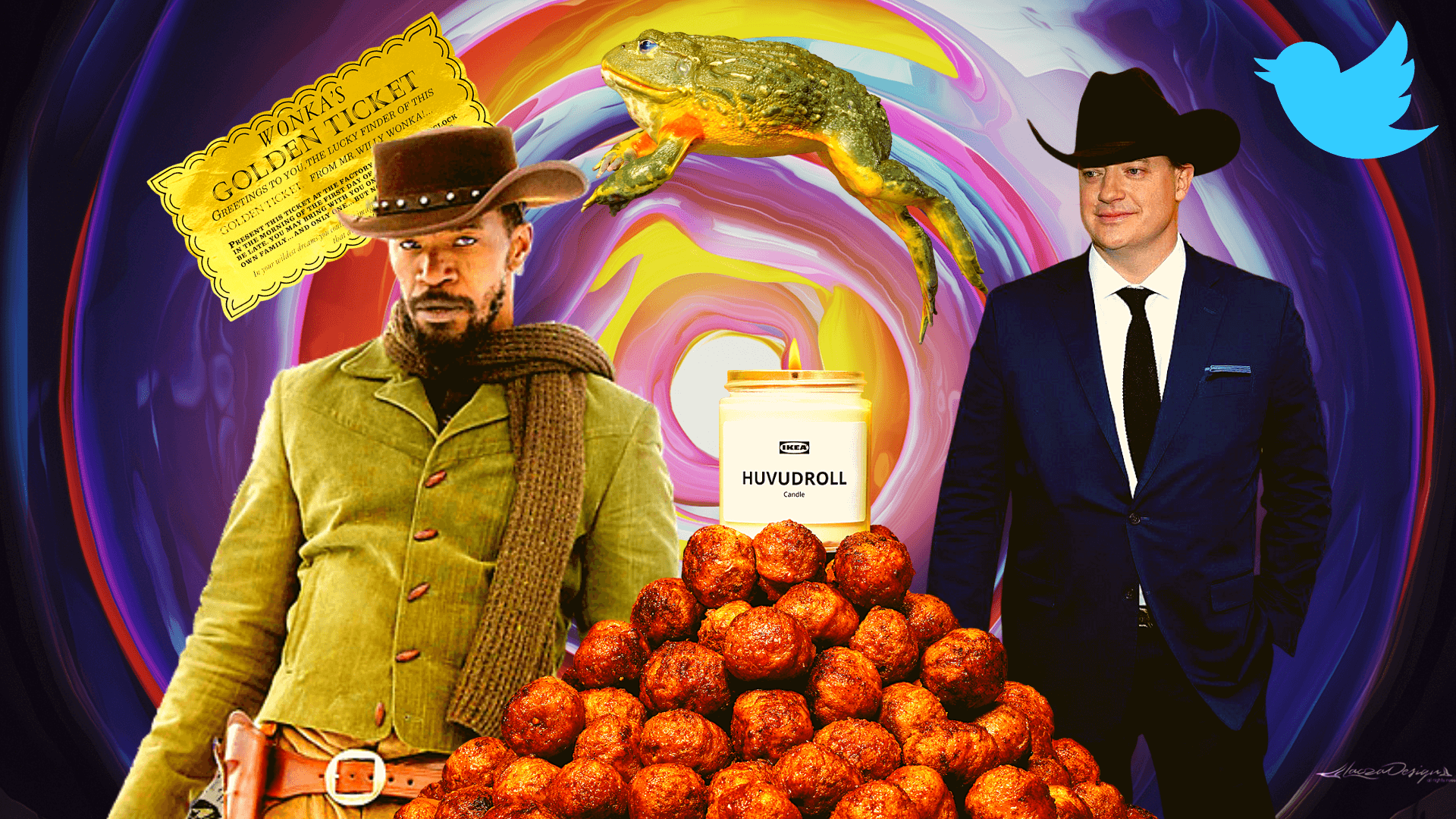 Ikea has released a limited edition Swedish meatball-scented candle for the 10th anniversary of its family loyalty program which I am not a part of. But this also includes a Swedish meatball recipe. Either way, you can fill your home with the suffocating aroma of Ikea. (Delish)

Twitter changed its font. Now everything is better on this hell site. I change fonts all the time when I’m writing to adjust the vibes. Works every time, guys.

wait did our font change?

Apparently celebrities are smoking toad venom and we’re all missing out. (InStyle)

Who amongst us has not had an emergency cookie craving? Here’s how to make it in your air fryer. (Lifehack)

Me: I am going to get so productive once my kid starts school. Also me: *Spends 3 hours watching Django Unchained on Plex.*

Also since I’m the only person in the world who hasn’t read A Man Called Ove I will be watching that as well. I’m sure it’s just like the book. (Plex)

There’s a Willy Wonka-themed hotel complete with lickable wallpaper and a chocolate-filled bathtub. All sounds great in theory. (Nerdist) You will never find a better playlist than Britney Spears. (Plex)

Home Alone is getting a reboot titled Home Sweet Home Alone starring Archie Yates, Ellie Kemper, and Rob Delaney. I’ve given up at this point complaining about reboots. Let’s get it over with, Disney+. (Variety)

Brendan Fraser has been cast in Martin Scorsese’s next film, Killers of the Flower Moon, and people are rejoicing. As they should. Fraser is a damn delight. (Pajiba)

Brendan Fraser gets emotional after hearing that the Internet is rooting for his comeback 😭 pic.twitter.com/EQsJtAxuGY

Jamie Oliver went rogue with this lasagna recipe on Instagram and people are just not having it. I don’t hate it but I get the fury. (HELLO!)

Absolutely more obsessed with the ads of this game, Merge Mansion, than the actual game. (Kotaku)

Say goodbye to boring, toxic showers and hello to organic, vegan soaps designed by artist Jen Black. There’s more. She’s teaming up with other female artists to add limited-edition art prints because why not. (Inhabitat) These three girls were being cheated on by the same guy (who obviously has a lot of time on his hands) so they confronted him, then renovated a school bus and went on a road trip together, which they’re documenting on Instagram. (Uproxx)

“Let’s get one thing absolutely clear: Robin isn’t gay. Don’t let the green Speedo and the pixie boots steer you wrong; Dick Grayson is as straight as uncooked spaghetti.” This piece about Batman and Robin starts off pretty promising. (Slate)

Lizzo and Cardi B’s new video Rumors is a big F you to all the haters, and at the same time a lover letter to fans. (Teen Vogue)

Apparently you have to be someone amazing, like these female frontline workers during a pandemic, in order for Mattel to make a Barbie out of you. I did two loads of laundry yesterday. Does that not count for anything? (The Mary Sue) I have sworn that by the time I’m 40 I will be an amazing version of myself and to do that I will listen to every self-care podcast in existence, starting with Forever35 with Kate Spencer and Doree Shafrir. (Plex)

I love a good ghost story and even more so when it’s a real place I can visit like the Witch’s Castle in Forest Park. Someone please come with me. I don’t want to die alone. (The Lineup)

The most amazing part of the Olympics is the athletes reacting to their success, like this Belgian marathoner who’s overjoyed at finishing 28th after having only started training a few years ago (and in her mid-30s no less). I am going to watch this every time I’m too lazy to walk into my garage to get on the Peloton.