We are now halfway through Acapulco’s first season. The show is charming as hell. As my colleague Thor “Lord” Benander noted, it’s funny in ways that manage to feel familiar without feeling tired or played out. It’s Ted Lasso-ian in its ability to get you rooting for every character. And it’s so far thrown its full weight behind world building, rather than developing clear or obvious conflicts.

Five episodes in, there isn’t a true “bad guy,” though it’s obvious there will have to be at least one; no super-rich mogul like the present-day Máximo ever came to be without leaving a trail of conflict in his wake. Máximo trading his father’s escapulario for some guest-requested joints; his sister Sara’s unspoken homosexuality; Máximo growing ever more confident on head poolboy Hector the Protector’s turf: these are all developing clashes, left in the background for now while the show — and its audience — finds its way around. Coffee: “The one thing that keeps adults going until it’s late enough in the day to turn to alcohol.”

There are a couple of big reasons why Acapulco manages to be this charming, and therefore this compulsively watchable. The first and biggest is its acting, which is exquisite. Enrique Arrizon as the young Máximo is the casting choice of the year, followed closely by Fernando Carsa as Máximo’s best friend Memo, followed closer still by every single other member of this cast. Damián Alcázar’s Don Pablo manages to be as no-nonsense as you’d expect from an éminence grise, but is surprisingly hands-off, for the most part choosing to let Las Colinas’ staff learn from its own mistakes. As Sara, Regina Reynoso balances a world wariness in her most public moments with a secret and delighted tenderness in her private ones.

I really want to keep doing this for every member of the cast, in case you needed further proof that I am in thrall to this show. But I would be remiss if I didn’t give a shoutout to Regina Orozco, who plays Lupe as a mix of Red from Orange is the New Black and Jabba the Hutt. She is a fascinating sour note in this otherwise sweet show and I hope we get to peek inside her lost-and-found of horrors a lot more.

And the other big reason for Acapulco‘s charm and its ability to get away without much conflict is because of the setting, which foregrounds the Spanish language and the people who speak it in ways still largely foreign to English-speaking audiences. Because everything in Acapulco revolves around Las Colinas, the exclusive and very pink resort where Máximo lands his dream job, we still haven’t seen too much of the city of Acapulco itself. But the only major show from the United States to which I can compare Acapulco is Jane the Virgin, which was set in the United States and whose Spanish-language scenes almost exclusively involved Jane’s grandmother, Alba, who understood English but chose not to speak it. (Please note that this is a criticism not of Jane the Virgin but of my laughably limited televisual vocabulary.)

In Acapulco, fully half the dialogue is Spanish. The language serves to segregate the acceptable spaces (anywhere there might be guests, in front of whom only English can be spoken) from the unacceptable ones (anywhere else). When Acapulco‘s characters are speaking Spanish, they aren’t on display. They’re free to disclose things about themselves they would never be able to in English, since their use of English turns them into just staff members, not quite complete people. If you aren’t fluent in Spanish, watching Acapulco go a minute or two, an entire scene, sometimes even longer with only rapid subtitles to steer by means being a little uncomfortable in the same way these characters have to be while fulfilling the whims and desires of their wealthy guests. When you don’t have your language, you’re denied a full range of expression. That should be more than enough to engender a little empathy in anyone.

I’m spending this much time going on about language instead of just getting to the goddamn point already because it’s clear that Acapulco is growing increasingly comfortable with its own range. “World building” isn’t code for just meandering about, making us feel good and never putting anything at stake. After five episodes, Acapulco has already gotten Máximo to push his own boundaries so far that he’s all but forgotten his mother’s warnings about the den of sin where he works. The show has humanized Chad — Chad! It’s given us multiple storylines about the then-taboo of same-sex relationships, both of which stories hinted at days of reckoning down the road. And it’s introduced a slew of secondary and tertiary characters, all of whom are ripe for further development. In fact, Acapulco is already weaving together intriguing, increasingly complex episodes featuring multiple characters. It’s not the traditional A, B, and C, episode-by-episode sitcom story formula as much as it is a main arc (Máximo’s) and several secondary arcs (Memo’s, Julia’s, Don Pablo’s) devoted to the show’s Mexican characters, as well as another given over to the interplay between them and the people in charge (Diane; increasingly Chad), and another for Las Colinas’ featured guest(s) of the week.

Doing all of this at the same time, in two different languages, while paying more than just lip service to cultural difference? It’s quite a feat. It also makes the present-day scenes between Adult Máximo and his nephew Hugo look a little bit thin by comparison.

Don’t get me wrong: Eugenio Derbez is fantastic, and shame on me for my ignorance of his entire career to this point. He and Raphael Alejandro (Hugo) have wonderful chemistry together. As the gatekeepers of the larger story, their relationship is essential for the entire show. Derbez’s Máximo, 35 years wiser and world-warier than his 80s-giddy self, is just as quick with a punchline as Arrizon, but has an ease to his movements and a restraint to his presentation that Young Máximo simply doesn’t even know exists. Alejandro does a great job casting Hugo out as a snotty, seen-it-all teenager, then reeling him back in as he realizes there’s a lot more to his uncle’s story (to say nothing of life) than he realized. Acapulco‘s present-day scenes have to be more than pretty sights, punchlines…

My complaint here is that so far, Derbez and Alejandro have kind of been relegated to the sidelines. We see them in every episode, usually at the beginning, and a couple more times after that. They’re there to set up the episode’s main story, as well as its main moral thrust, courtesy of an object from Máximo’s gorgeous Chest of Artifacts. It’s a nifty plot device, but the trope places almost as much importance on the object as it does on the two characters. And this is happening right as Acapulco is starting to dive into the more unpleasant realities of life for the staff of a posh resort hotel. Julia and Chad’s relationship, to name just one such reality, feels like it’s already gotten more screen time and explanation than Máximo and Hugo’s. That’s not necessarily a bad thing; it’s about how you use your screen time, not the mere fact of it.

All I know for sure about what’s happening in the present day, though, is that Hugo is at Máximo’s resplendent cliffside estate in Malibu for what appears to be an open-ended birthday celebration. Hugo’s skepticism about getting an extended life story for his birthday was out there front-and-center in the pilot. Four episodes later, I wonder exactly why he’s at his uncle’s house for so long, with no other friends or family members in sight, during what should be all rights be one of his prime birthday parties. Fourteen is when you can start doing all kinds of cool stuff with your friends — you’re (ideally) getting more independence and trust from your parents, who also relish the thought of a night or two alone; it’s all coming together, life-wise. So why is Hugo camped out with Uncle Máximo, all alone?

I also wonder how Acapulco will use its present-day frame to further acknowledge the chasm of wealth and class status between Máximo and literally everyone else around him. Because that gap in 2021 is far wider in Máximo’s favor than it was in his disfavor back in 1984. We’ve seen some of this played for laughs — good ones; don’t get me wrong — with the jokes about Máximo having one of the all-time upper class indicators: an all-white butler.

It’s also easy to foresee a telling of this story in which Máximo wound up sacrificing a great deal of his connections to his life in Acapulco in order to amass the incredible wealth and power we’re told he has today. Except for Sara, the present hasn’t given us any mentions or references to any of the characters from Máximo’s past, let alone sightings. The only other people we’ve seen at Máximo’s palace of a home are people who work for him. He certainly seems to lead a lonely existence, way up there at the top of his own metaphorical mountain. 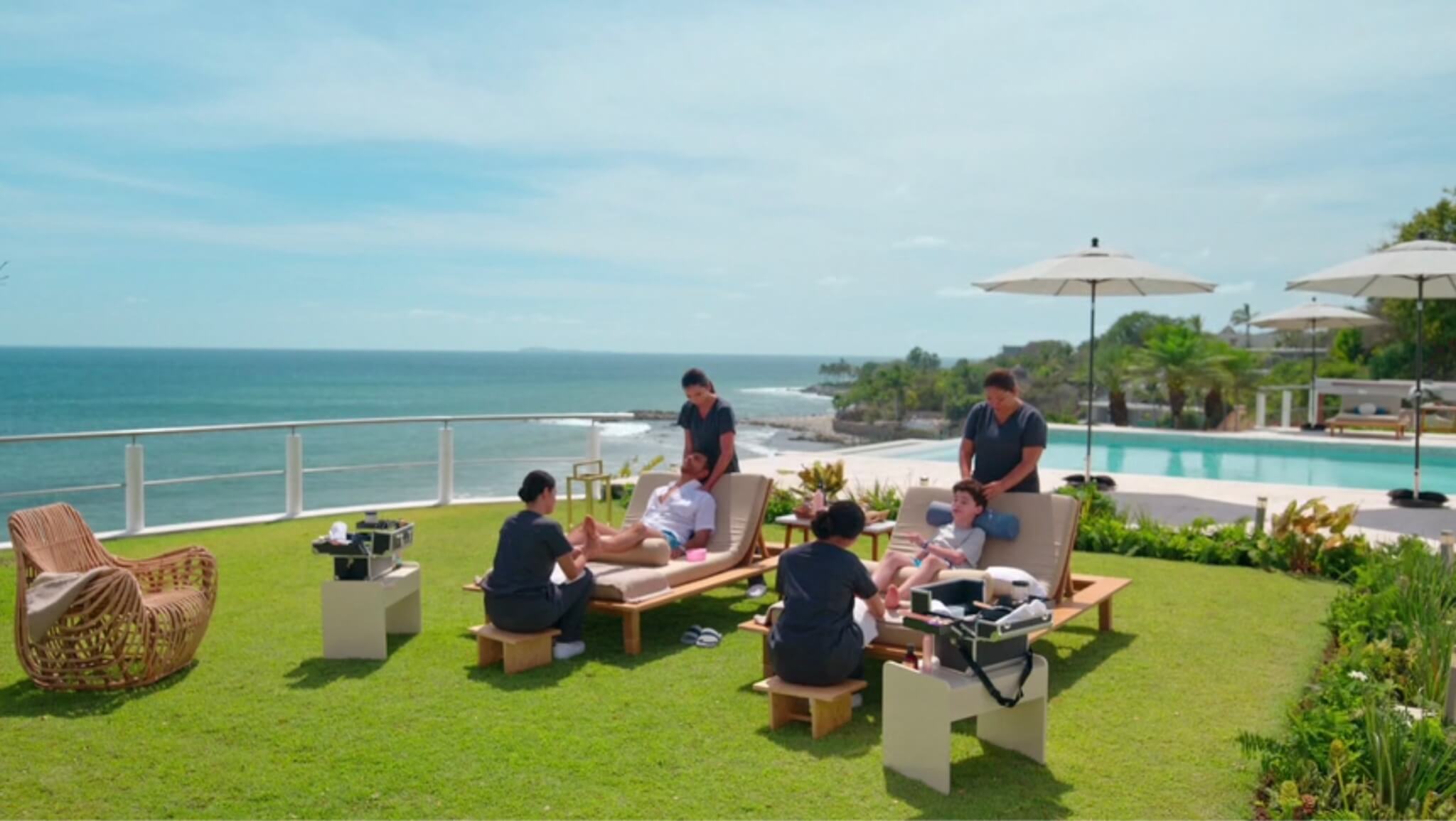 The biggest gathering we’ve yet seen at Máximo’s house.

There is, of course, plenty of time for Acapulco to bring forward plenty more elements of Máximo’s modern life. Every single one of its 80s scenes has a vigor and a joy and above all a sense of camaraderie that’s missing from Máximo’s current house. That isn’t a coincidence. As the main story continues to get richer and deeper, I become more certain that we’re going to find out exactly what Máximo had to give up to get where he is, and what it cost him personally.

There’s a quiet, dark flip side to Acapulco, the most colorful show on TV. So far, we’ve only seen it by implication. I guess what I’m really saying is that I appreciate the time the show has taken to tell the stories we’ve gotten, and I hope Acapulco gets a second season to keep telling them at its own pace.

Enrique ArrizonEugenio Derbez
In this article: